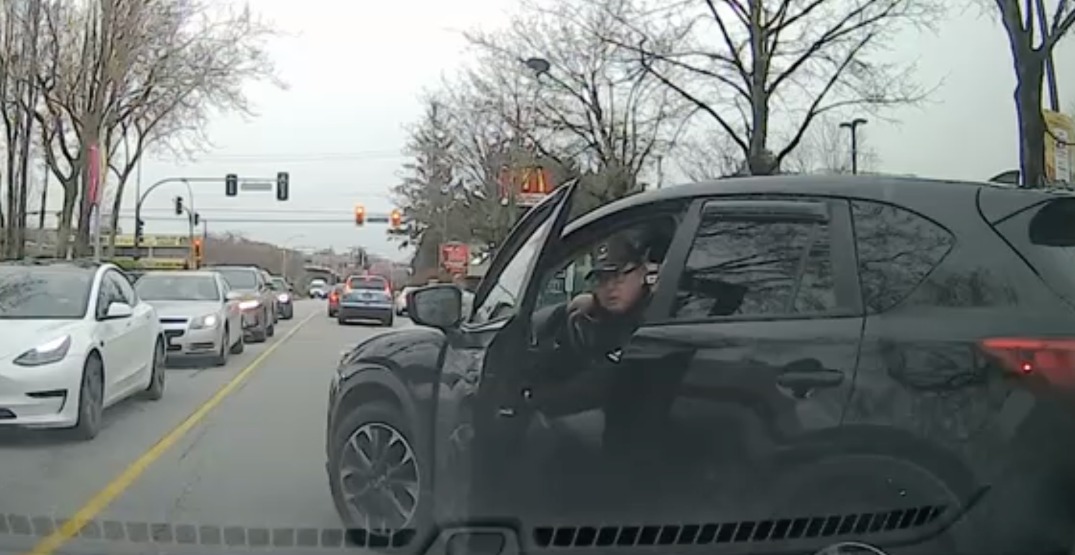 A driver in Richmond captured a frightening incident of road rage on their dash cam.

Local Daniel Man told Daily Hive he was driving near Richmond’s Lansdowne Centre with his family when they crossed paths with an aggressive driver who “tried to run [them] off the road” on March 25.

They were in the lane to turn left or continue straight when Man says the other driver, who was in the right-only lane, cut them off.

“Angry, I lay on the horn for a bit which appears to have angered this individual. He tries to hit me a few times, then this individual blocked the road, glared me down, proceeds to tailgate me with the horn and high beams for a block,” said Man in an email to Daily Hive.

“After he realizes that intimidation tactics from behind doesn’t work, he again tries to run me off the road/hit me. Eventually he tries to block me one last time before driving off.”

The incident happened at the intersection of Alderbridge Way and Hazelbridge Way around 5:23 p.m.

Man captured the whole thing on video and posted it on Reddit.

The video shows not only the severity of the altercation but also the aggressive driver’s face and licence plate.

Reasonably, Man was concerned about the safety of his wife, four-year-old, and one-year-old on board.

“I just feel like this needs to be shared a bit more, and he gets publicly shamed for being such an assh*le,” he said in the comments of his Reddit post.

In an email to Daily Hive, Man said he and his family were doing fine on the afternoon of March 26.

“Was very terrified at the moment, as I was very concerned for the safety of my family,” he said.

“I’ve come across a lot of oblivious drivers, but never have I come across one so aggressive.”

One commenter on the Reddit thread said, “This is why everyone needs a dash cam.” Another replied, “That is not your typical Richmond driver. He knew what he was doing.”

Man ended up reporting the incident to Richmond RCMP, who conducted an investigation and spoke to all parties involved.

“One of our frontline officers was dispatched yesterday to conduct patrols for a vehicle involved in a possible road rage incident,” they confirmed in an email to Daily Hive Vancouver.

“The complainant provided information to the dispatcher, but no dash cam video was mentioned. Further, the complainant did not wish any action taken by us,” they said.

They issued a violation ticket based on the evidence they received.

“The complainant will be required as a witness to the original motor vehicle offences,” said police.