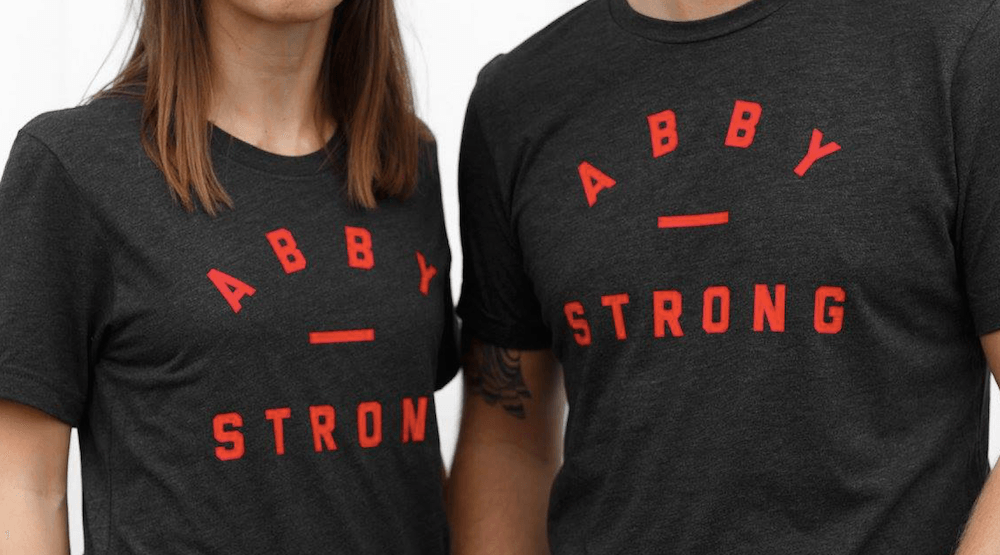 The community of Abbotsford is coming together to show they are “Abby Strong” in the wake of the tragic stabbing at Abbotsford Senior Secondary on November 1 that left one student dead and another injured.

Gina Vanderheide and her husband Josh started the #AbbyStrong campaign and are selling t-shirts and bumper stickers in an effort to show support for the victims of the attack and their loved ones.

A movement for the whole community

Vanderheide is a teacher on call with the Abbotsford School District. She was working at Abbotsford Senior Secondary on the day of the attack and has been filling in some shifts at the school since the incident. Vanderheide and her husband also own Field House Brewing in Abbotsford and following the stabbing they both saw the impact the attack had on the city as a whole.

“When it happened we heard a lot of people rallying to do something but it was sort of a whole bunch of small individual efforts… Right off the bat we were like ‘let’s try to do something big that everybody can be a part of,'” Vanderheide told Daily Hive.

In support of initiative to help families of the victims of @abbysenior tragedy, #abbystrong t-shirts now on sale in @UFVBookstore. pic.twitter.com/6xIGBQjRwy

The #AbbyStrong t-shirts are on sale for $25 and bumper stickers are selling for $2. All proceeds go to the families of 13-year-old Letisha Reimer, the student killed in the attack, and her 14-year-old classmate who was injured.

Gabriel Klein, 21, has been charged with second-degree murder and aggravated assault, in connection with the stabbing.

About 1,500 people attended a celebration of life ceremony for Reimer on Saturday at Abbotsford’s Central Heights Church.

Vanderheide said the response to #AbbyStrong has been very positive and the t-shirts have helped bring a sense of community to Abbotsford Senior Secondary.

“We went in and gave out about 1,200 t-shirts to every student and teacher in the building and they were super excited, and I think it was a really neat experience at the end of a long week for them,” she said.

In terms of how students and staff at Abbotsford Senior Secondary are recovering after the tragedy, Vanderheide says she cannot speak for the school as a whole because she is not a permanent staff member. But she says that students are teachers have “definitely felt the support” of the community.

“As far as everybody coming on board to help out it’s been amazing. I think they have felt really strong support from the community and the school district,” she said.

“I think that most of the kids [are trying] to be positive and move on and take that brave step into getting back to normal, which is probably going to take them some time.”