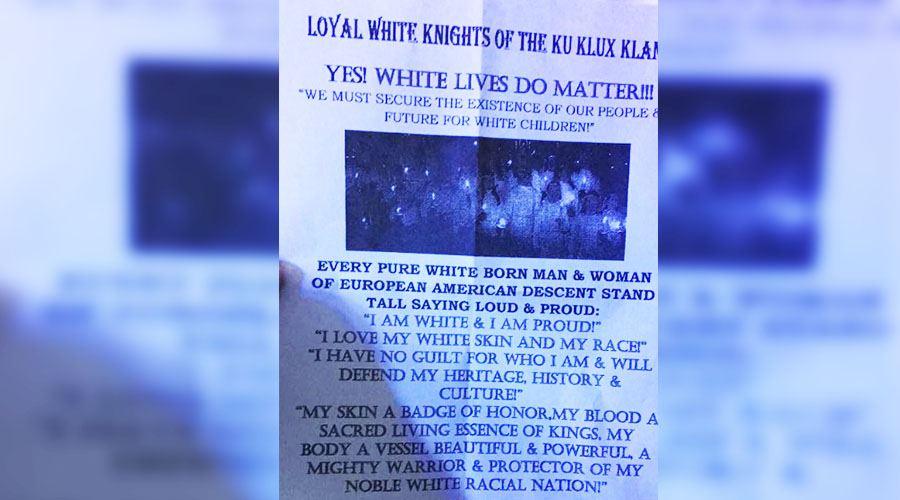 Gurpreet Singh wants to send a message that the recent distribution of racist KKK literature in Abbotsford will not be tolerated.

Singh is an organizer of the Rally Against Racism and Bigotry, which will take place on Sunday, January 22, at the historic Gur Sikh temple in Abbotsford.

“We thought we should organize something in Abbotsford to send a message that we are all united against racism,” Singh told Daily Hive.

KKK literature has been distributed in Abbotsford on two occasions within the past few months.

In October 2016, KKK fliers were thrown onto residents’ doorsteps overnight. Sealed plastic bags contained hateful flyers which listed Klan recruitment hotlines and included the headline ‘White Lives Do Matter,’ along with rice to make the bags heavier and easier to throw.

The latest incident occurred on January 16, 2017. Over 70 bags containing hateful KKK literature was distributed to residents in Abbotsford. The pamphlets made disparaging comments about Martin Luther King Jr., whose birthday was commemorated just a day before on January 15.

Singh, along with some of his fellow community members are ready to take a stand against the racist rhetoric.

He feels that people need to be aware that racism and bigotry are still a big problem in today’s society.

“Many people are blaming Donald Trump for this because they feel that after (he) got elected people have become emboldened, which is true, nobody can deny that,” Singh said.

“But let’s face it, racism has always been there and Donald Trump is just a symptom, he is not a cause of these problems.”

Built in 1911, Abbotsford’s Gur Sikh temple is the oldest existing temple in North America and a national historic site in Canada.

Singh explains that the temple has a history of being a place for community organizing against injustice.

“We chose to (hold the rally) at the Heritage Sikh temple because that was established a century ago by community elders as part of their resistance against racism and colonialism back home (in India),” Singh said.

“There is a long history (at the temple) to resist against racism.”

Singh is expecting a good turnout in at the rally on Sunday.

It will be a busy weekend for protesters in the Lower Mainland this weekend.

Thousands of people expected to take to the streets in Vancouver on Saturday to protest the misogynistic rhetoric seen during the US election,  in solidarity with the huge Women’s March planned for Washington, DC, the same day.