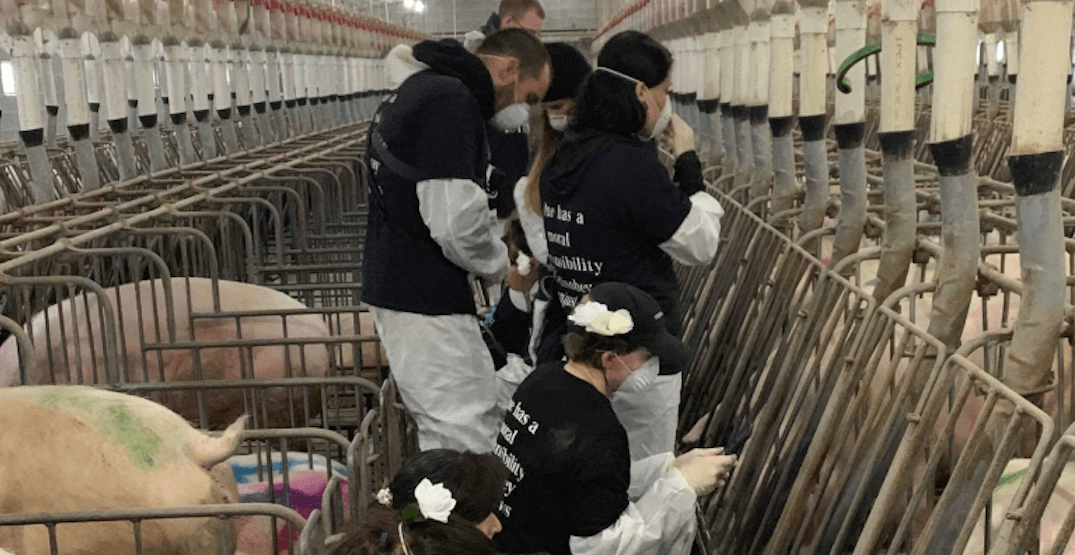 About 200 people participated in a protest around an Abbotsford pig farm this past weekend, but according to police, the event was a largely peaceful demonstration.

According to organizers, the protest began at 6 am on Sunday, when “65 concerned citizens peacefully entered hog farm property, while another 135 individuals gathered outside of the property in support of the cause.”

“We are speaking out against the cruelty of the animal agriculture industry, and to stand in solidarity for the animals,” said organizers in a statement.

The aim of the protest, they said, was to “expose the reality of what is happening to the victims of the ‘meat’ industry and to challenge the current mindset within our society.”

The protesters noted that Sunday’s gathering wasn’t “about this one facility, or a call for better animal welfare standards, but rather a call to end the inherently violent animal agriculture industry entirely.”

They added that they were part of an internationally recognized movement called  “Meat The Victims.”

The protest was “peaceful” and with the family’s cooperation – as well as the assistance of local vets that were on site – “we able to facilitate a tour for the media that the protesters had asked for,” said Abbotsford Police Sgt. Judy Baird. “The family allowed the media access to the farm and did the tour, and after the tour, they answered questions.”

Baird told Daily Hive that the farm was “basically stating they had nothing to hide.”

She noted one person was arrested during the protest for break-and-enter, as well as mischief.

Others were fingerprinted, “most” produced ID, and “the APD will be continuing its investigation into possible criminal offence charges of break-and-enter, mischief, and trespassing,” she added.

Baird said the APD “acknowledges the right that people have the right to protest with freedom of speech.”

The concern in this instance however, is that a criminal offence occurred where people were trespassing and breaking into and onto other people’s property.”

Baird said the protest lasted throughout the morning before wrapping up around 12:30 pm.

“One of the issues was that the protesters arrived in two buses which had then had parked elsewhere in Abbotsford, so we needed the buses to come back a few time to pick up all the protesters,” she said. “We were waiting for the shuttle to complete to be able to open the road back up, so that was part of the delay.”