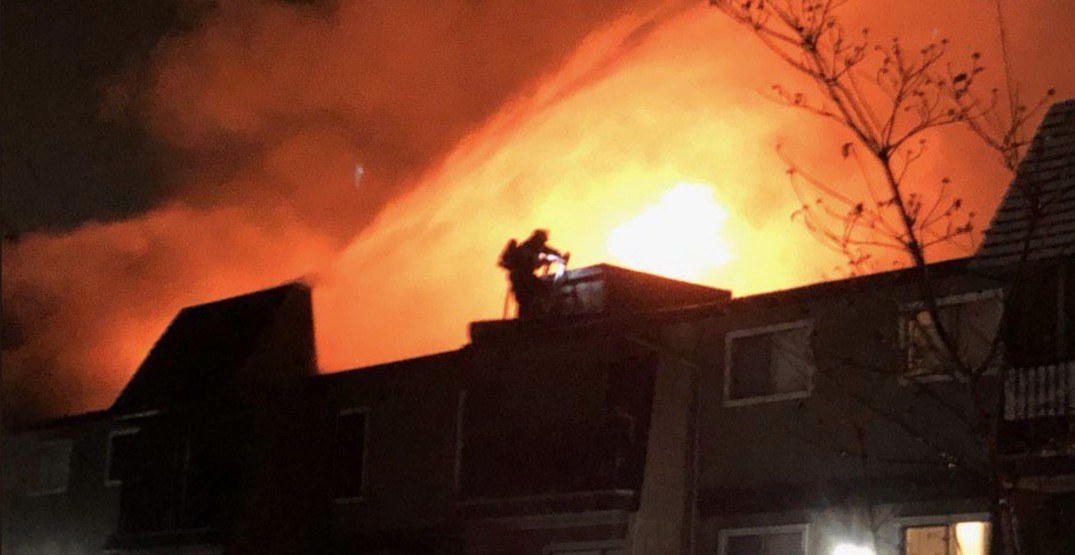 A woman has died after a fire engulfed an apartment complex in Abbotsford on Wednesday evening.

According to the Abbotsford Police Department (APD)  emergency crews responded to a structure fire located in the 2400 block of Countess Street at about 10:30 pm on March 6.

At the scene, Abbotsford Fire Rescue Services (AFRS) found two units of the three-storey structure were fully engulfed and many tenants had evacuated to their balconies and were unable to exit their units.

Fire crews tried to confine the fire while additional members began ladder rescues for tenants stuck on the balconies.

#AbbyPD, Abbotsford Fire Rescue Services (AFRS) remain on scene investigating an apartment fire last night on Countess St. . A female in her 60s has sadly succumbed to her injuries. This fire does not appear susp at this time. More details: https://t.co/IU3alszcUJ pic.twitter.com/aAQnGEEoRh

After tenants were escorted to a safe area, fire crews began their interior firefighting effort. More residents were found and escorted to safety. Multiple pets were also removed from their building and returned to their owners.

After the fire was under control, crews found a woman in her 60s who was still in her suite. She was attended by the BC Ambulance Service but unfortunately, she succumbed to her injuries shortly after.

“The Abbotsford Fire Rescue Service and the Abbotsford Police Department extend their sincere condolences to the family and friends of the female who passed away in this fire,” said AFRS and APD in a release.

Abbotsford Police Department Major Crime Detectives, the AFRS and the BC Coroners Service continue their investigations this morning.

Abbotsford Police say this does not appear to be a suspicious fire.