A Quiet Place is maybe too quiet for those who scare easily. There is something about watching vulnerable characters on the screen having to be completely silent to avoid being slashed to bits, which gets audiences pretty squirmy for 90-minutes.

It’s also too quiet for those of you who can’t stand listening to people chew their popcorn loudly or continuously rustle their candy bags. 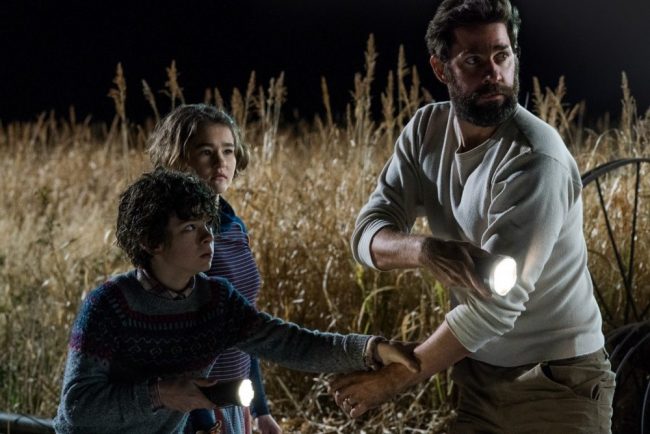 Like the horror films Lights Out and Don’t Breath, playing around with people’s senses of sight or sound has always been a fun way to build some tension.

If we had to categorize A Quiet Place than it would fall somewhere into “smart horror.” It uses a lot of classic genre elements and ideas, but what director John Krasinski does so well is bring emotion and heart into the film. It allows you to root for the characters.

The story plays on the protective instincts of parents towards their children, as they struggle at all costs to keep the monsters outside the door at bay. A family is beset by blind mystery beasts, with fang-laced mandibles, that attack anyone who makes a noise. There is no real backstory but what’s clear is that these creatures have ravaged the world and the family must learn to survive on a secluded farm without making a peep. 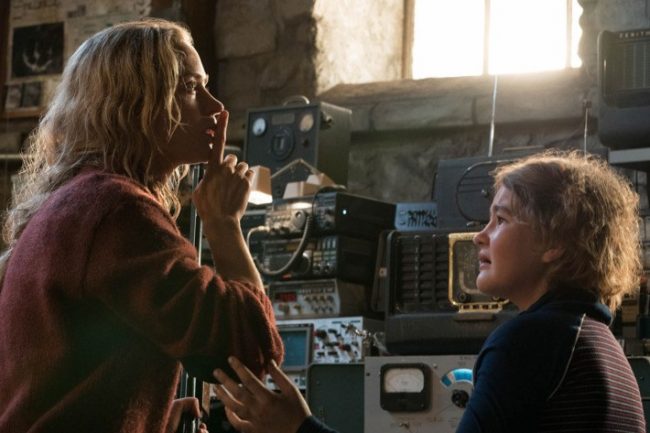 Imagine trying to do that with two small boys, a deaf preteen girl, and a baby on the way? As a parent, I say, good luck with that! I’m pretty sure most families would die on the first morning. So yes, you do have to suspend your disbelief a tad for this movie. Not to mention, why would you get pregnant during this silent alien apocalypse anyway? Seriously, have you not heard of contraceptives?

As bizarre and off the rails as things are narrative-wise, the film relies heavily on its actors, who do a tremendous job of bringing you into their little chaotic life. Krasinski not only directs but he also stars alongside his real wife, Emily Blunt. They ooze chemistry so playing the role of partners on screen comes naturally. But having to act without saying much is no easy task. Most of the dialogue is through sign language, faint whispers, and facial expressions which added to the overall ambiance of the film. 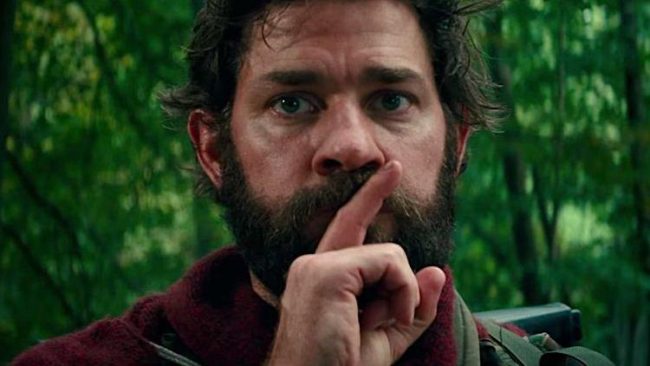 Outside of Krasinski and Blunt, the children also provided solid performances. Noah Jupe (Suburbicon) does a great job of playing the scarred son, while Millicent Simmonds (Wonderstruck), who’s hearing-impaired in real life, does incredible work as the deaf but tough daughter. Her handicap arguably helps the family survive the alien invasion.

As I said at the beginning, don’t go and see A Quiet Place with your chatty friend or sit near people who eat. It’s a quiet movie by design, and you want to completely lose yourself in the tension, the effects, and sound design which includes the haunting score by Marco Beltrami.

In the end, Krasinski has entirely shed his Jim Halpert (The Office) persona and has expanded his career by creating a great little sci-fi/horror flick that delivers terror and thrills. It also provides a fabulous message of a family’s unconditional love. You don’t have to be a horror fan to appreciate this film, just get your butt muscles ready for sitting on the edge of your seat. Kudos to Paramount who have released two quality sci-fi/horror films this year in Annihilation and now A Quiet Place.

Playing at a theatre near you. Rated PG-13 (for terror and some bloody images). 90 minutes in length.