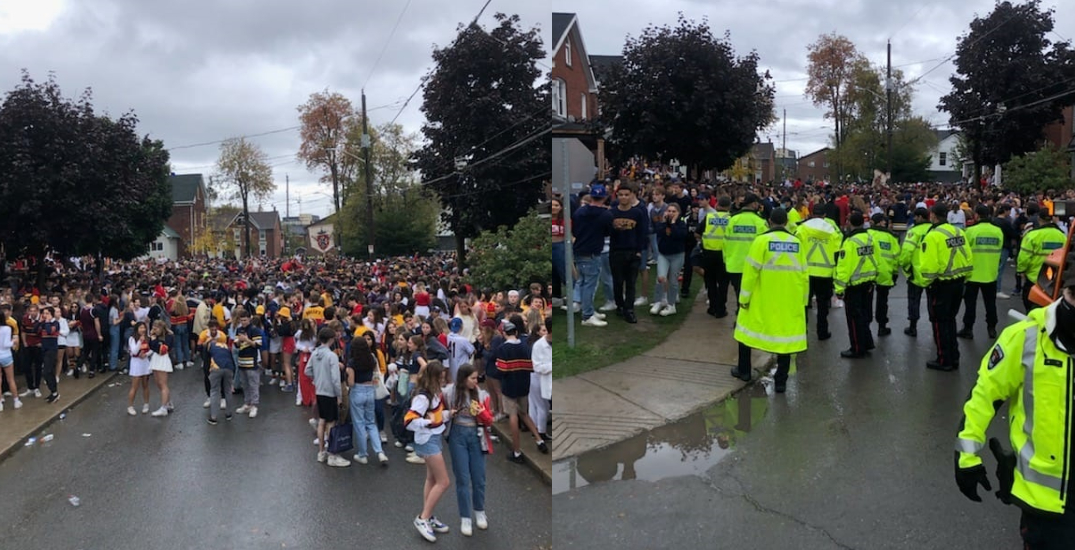 Thousands of Queen’s University students took to the streets of Kingston on Saturday afternoon for an unsanctioned homecoming party.

According to Kingston Police, a “volatile” crowd of roughly 8,000 people had gathered on Aberdeen Street, in the city’s University District, by 2:30 pm.

Police said one officer was injured after the crowd hurled projectiles at responding officers.

Officers declared the Aberdeen Street gathering, which had spilled onto neighbouring William Street by 4:00 pm, an “aggravated nuisance party.”

An aggravated nuisance party is one that exceeds Ontario’s COVID-19 gathering limits of 25 people indoors and 100 people outdoors.

Under a Kingston bylaw, attendees of such gatherings can be hit with a $2,000 ticket, while organizers may be fined $10,000.

@Kingstonpolice are estimating the crowd on Aberdeen Street has swelled to approximately 8000 people. Police on the ground along with assistance from City Works are attempting to keep the crowds contained. pic.twitter.com/bgXSvSns3T

Due to the ongoing COVID-19 pandemic, all official Queen’s homecoming events were held virtually.

“Being fully vaccinated is not a pass to ignore Ontario’s gathering limits,” Deane wrote in a letter to the school community.

“In these precarious times when the future is still uncertain and the good health of our community remains at risk, I ask that you think about the impact of your actions and you hold one another accountable.”

A friendly reminder to everyone taking part in this weekend’s Homecoming events.