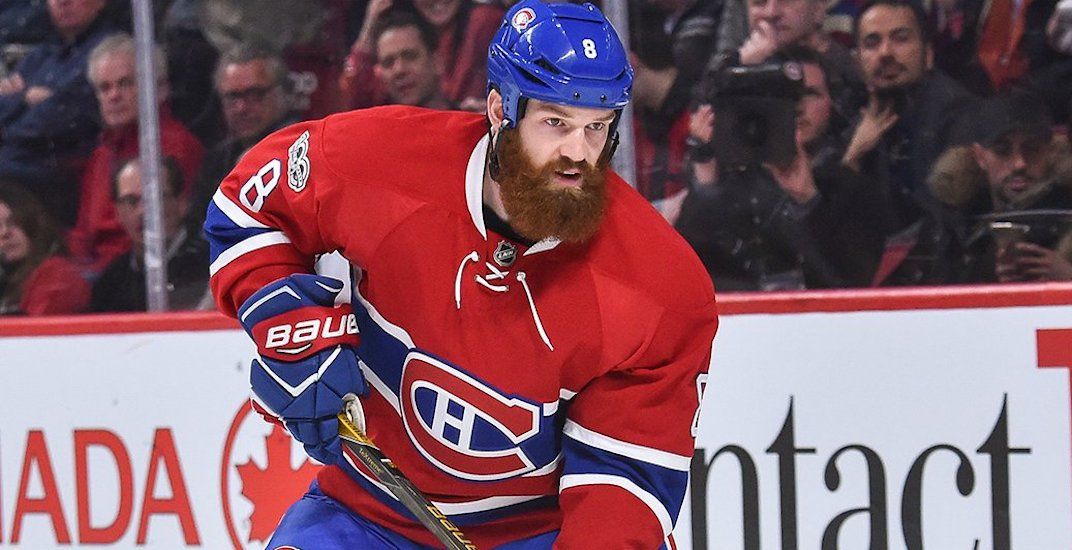 On July 1, 31-year-old defenceman Jordie Benn completed his homecoming by signing a two-year, $4 million deal with the Vancouver Canucks.

When asked about what excites him most about joining the Canucks during a conference call, he said “everything.”

“When you have a chance to go home and play in front of your friends and family, and a team that you grew up watching, it’s just one of those things that I’ve always wanted to do.”

The Victoria native now joins his third NHL team after taking an unconventional route to the NHL. Get to know one of the newest members of the Canucks by reading these seven fun facts about the eldest Benn brother.

1. He once played for the “Victoria Salsa”

Benn was a late bloomer. During his first draft-eligible season, he was still playing most of his hockey in the Vancouver Island Junior Hockey League for the Peninsula Panthers. He did slip into four games of BCHL action that year for the Victoria Salsa.

The best part of the Jordie Benn signing is the fact he’s an alumni of one of the best logos in hockey. Victoria Salsa baby. Not often you see an angry jalapeño holding a hockey stick. pic.twitter.com/NuN4zhCTFa

Benn then went from the BCHL to the ECHL without leaving the city. He left the Victoria Grizzlies for the ECHL’s Victoria Salmon Kings. He played one season there where he had 12 points in 55 games.

Although Benn has the beard of someone who looks to have spent some time in Alaska, he never ended up calling the most northern state his home. However, he was close to doing so back in 2008.

Benn got a scholarship to play college hockey at the University of Alaska-Fairbanks when he was 17 years old. He committed to the university, but later changed his mind, electing to join the Salmon Kings instead.

“I felt I committed too early,” Benn told the National Post back in 2017. “Should have played my 18, 19-year-old year and then committed. But it is what it is. I just decided not to go to school, didn’t really want to go to Fairbanks and live up there.”

3. Participated in Canucks prospects camp back in 2008

Victoria's Jordie Benn, who attended #Canucks camp in 2008 before he could grow a gnarly beard, is very, very, very happy to be coming home. “Being a kid growing up on the island and watching the Canucks all those years, this is very exciting. It’s a great time for me and my family. I’m ecstatic to come home and play with the Canucks. Home is home, and now I’m a ferry ride away from my family.”

Soon after committing to the Salmon Kings, Benn attended Canucks prospects camp as an invitee and impressed enough to sign an AHL deal with the Manitoba Moose.

That meant he was invited to Canucks training camp in 2008. His goal was to stick with the Moose, but he ended up back with the Canucks’ ECHL affiliate, the Salmon Kings, where he spent his first professional season.

“I’m pretty sure there’s a picture of me at camp with no beard and zits all over my face. Benn said during his conference call with media. “It’s pretty cool that it’s come full circle.”

It’s not very often that a player begins his pro career in the ECHL and makes it all the way to the NHL. Beloved Canucks alumni Alex Burrows was one of the few to do it, and Benn was able to join that short list.

For those that don’t know, Benn is covered in tattoos. The first one he ever got says “Never Quit.”

He got the tattoo as a 19-year-old still playing from the BCHL, and that mentality has now led him through 486 career NHL games.

5. First career point on a goal scored by… Loui Eriksson

After his time with the Salmon Kings, Benn slowly started to climb the ladder after joining the Dallas Stars’ ECHL affiliate, the Allen Americans. He then worked his way up to the NHL with the Stars, and signed his entry-level deal in July 2011.

He managed to get into three games with the Dallas Stars during the 2011-12 season and made he made his NHL debut on January 3, 2012.

Just a few shifts into his debut, he managed to pick up his first NHL point, on a goal by none other than Loui Eriksson. Jamie Benn registered the primary assist on the goal.

6. Scored on his only career penalty shot

Not known for a guy that puts up a ton of offence, Benn did show some slick moves in his one and only career penalty shot attempt.

It’s not often that a player like Benn would even find himself in the position to take a penalty shot, but coming out of the penalty box against the Wild, Darcy Kuemper was punished for throwing his stick at the puck after Benn caught him out of position.

Then, Benn looked more like his younger brother with the moves that followed.

7. Career-high in points with the Canadiens last season

Of course, the Canucks didn’t sign Benn expecting offence. The most important thing he does is play a solid defensive game, which the analytics reinforce.

However, he did post some career-highs last season with the Montreal Canadiens. Benn set a new career high in goals with five, and in points with 22. For what it’s worth, he also flexed the physical side of his game by finishing with a career-high of 124 hits.

If Benn can be a physical, shutdown defenceman in a third pairing with the Canucks, fans and management will be more than happy. Benn has been a late bloomer throughout his entire career, and perhaps he can carry forward the success from his career-best season with the Habs last year to Vancouver in 2019-20.