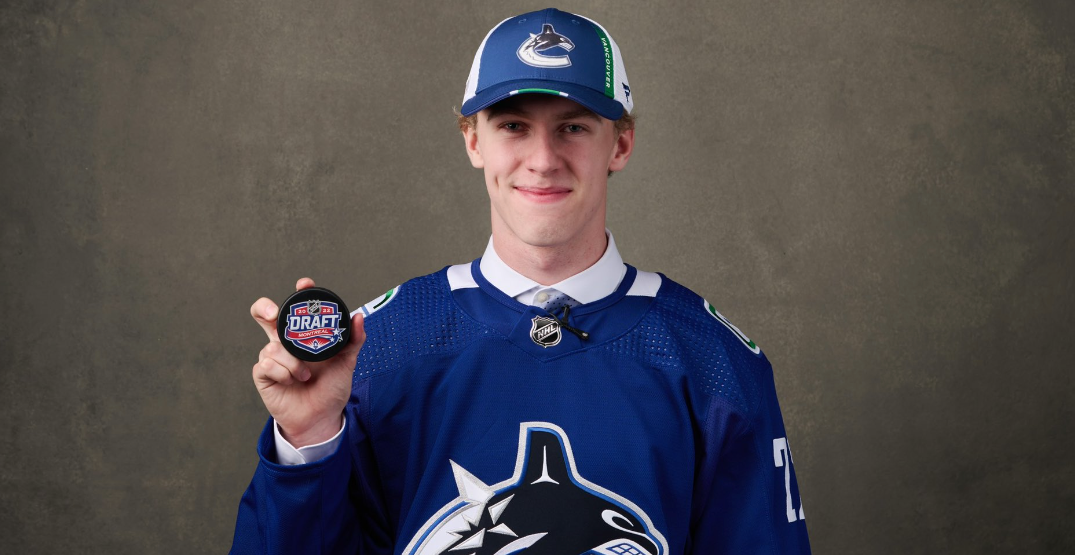 Here are seven things to know about the Canucks’ newest prospect.

1. Lekkerimäki was a consensus top-10 pick

Not many scouting outlets or media mock drafts had Lekkerimäki being available at 15th overall.

Reports suggest that the Canucks were hoping either Marco Kasper or Lekkerimäki fell to them at 15th overall.

Kasper was selected eighth overall by the Detroit Red Wings, but the Canucks got their other target after the young Swede fell compared the consensus.

Lekkerimäki’s greatest talent is his ability to score goals.

This season in Sweden’s top hockey league, Lekkerimäki’s tied Forsberg’s record for goals scored in the SHL by a 17-year-old.

Both scored seven goals, although Forsberg was a little more productive, registering his seven goals in 23 games, compared to 26 games for Lekkerimäki.

Still, not bad company for the youngster.

3. The Vancouver Giants own his WHL rights

Is there a chance that the Canucks newest draft pick could suit up for the local junior team? The Giants GM is sure taking his shot.

Jonathan Lekkerimaki is property of the Van Giants, Giants GM Barclay Parneta : Not much we can do but would welcome him with open arms and let Sedins on the ice with him when ever they want . We would love to help him in his development

However, Lekkerimäki has previously said that he’ll play in the Allsvenskan next season and continue his development in Sweden.

His SHL team was recently relegated to Sweden’s second-tier hockey league, and the young Swede reportedly wants to help his team climb back up to the top tier.

“I think playing another year or two in Sweden will be good (for my development),” Lekkerimäki said in an interview last month. “I’m under contract to play in Sweden one more season.

4. Lekkerimäki wears #40 “because of Pettersson

Sometimes, things are just meant to be.

The Canucks newest prospect has mentioned in previous interviews that his favourite player is Elias Pettersson.

On top of that, he also wears #40 because of his favourite NHLer.

Speaking of Pettersson, one scouting report compared both first-round picks by the Canucks.

However, it was a bit of a backhanded compliment.

Here’s the excerpt from Habs Eyes on the Prize.

“There have been comments in media and by hockey fans that he could be a similar find to Elias Pettersson who shared a lot of the same characteristics in his draft year, but what separates the two Swedish players is their overall hockey IQ. Pettersson was much better in all parts of the ice than Lekkerimäki is at the moment.”

Perhaps that comment won’t matter if the two end up on the same line in a couple of seasons.

One of the highlights for Lekkerimäki this season was his performance at the U18 World Hockey Championships.

Not only did he help Sweden stun the Americans in the gold medal game, but he led the tournament with 15 points in just six games.

He outscored four players at that tournament who were selected ahead of him in the 2022 NHL draft, including Logan Cooley (third overall), Cutter Gauthier (fifth overall), Frank Nazar (13th overall) and Rutger McGroarty (14th overall).

7. Considered to have best shot in 2022 draft class

In his rankings of prospects who had the best shot, Lekkerimäki finished first.

Pronman’s analysis didn’t deviate from the standard. Lekkerimäki’s shot is lethal, and he’s able to score in a number of different ways.

The #Canucks have selected Jonathan Lekkerimäki with the 15th overall pick. NHL-quality right shot, finds lanes to unleash. Really great catch-and-release ability. Hands are unreal too. I literally made this video today just in case.😉 The team got their man.
#2022NHLDraft pic.twitter.com/bfyigWumFi

In an interview last month, Lekkerimäki dropped the name of another NHL superstar whom he tries to emulate his game after.

“I think I have to improve my physical play but one day I want to play like Nathan MacKinnon. I feel I’m a sniper with good hockey sense and good skating.”

With idols like Pettersson and MacKinnon couple with a high-NHL ceiling, the future is incredibly bright for the Canucks top selection in 2022.