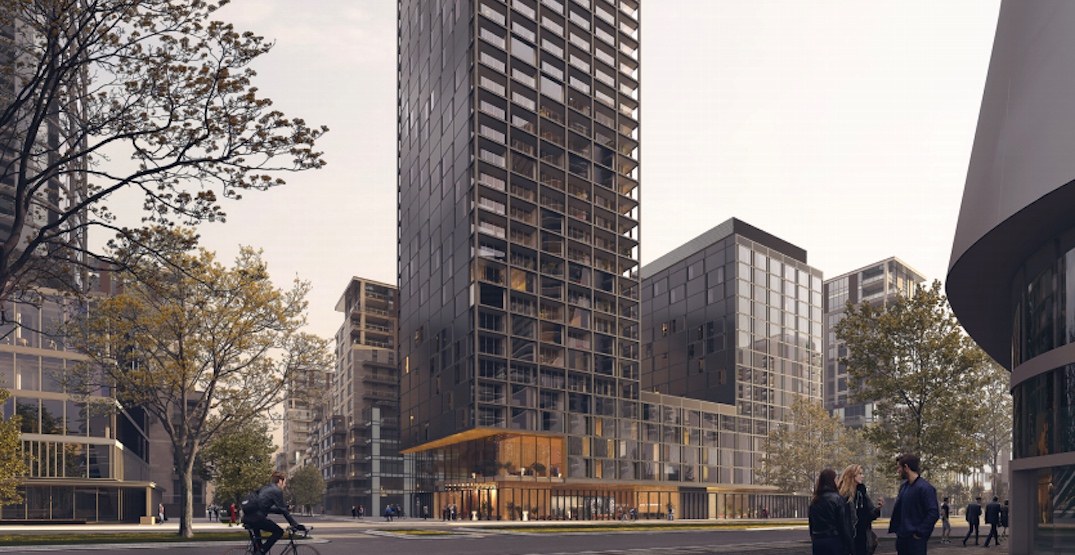 Another significant redevelopment has been proposed next to Oakridge Centre shopping mall, and this proposal uniquely includes a major hotel.

The Vancouver office of Perkins and Will Architects has submitted a rezoning application for 5910-5962 Cambie Street, replacing the stretch of four single family homes on the east side of the street between West 43rd Avenue and West 44th Avenue.

The site is less than two short blocks from the Canada Line’s Oakridge-41st Avenue Station and the new R4 41st Avenue RapidBus.

According to the application, there will be a 29-storey market residential tower, reaching 278 ft in height, as well as a 15-storey hotel tower. Both towers sit on a five-storey podium.

The market residential component will create 168 strata units, with the unit mix designated as 99 one-bedroom units, 46 two-bedroom units, and 23 three-bedroom units. Additionally, there will be 10 artist live-work studios.

On the ground level, there is about 4,400 sq. ft. of retail space, occupying roughly half of the streetfront, while the remaining spaces are dedicated for the hotel lobby, hotel marketplace, and hotel restaurant. 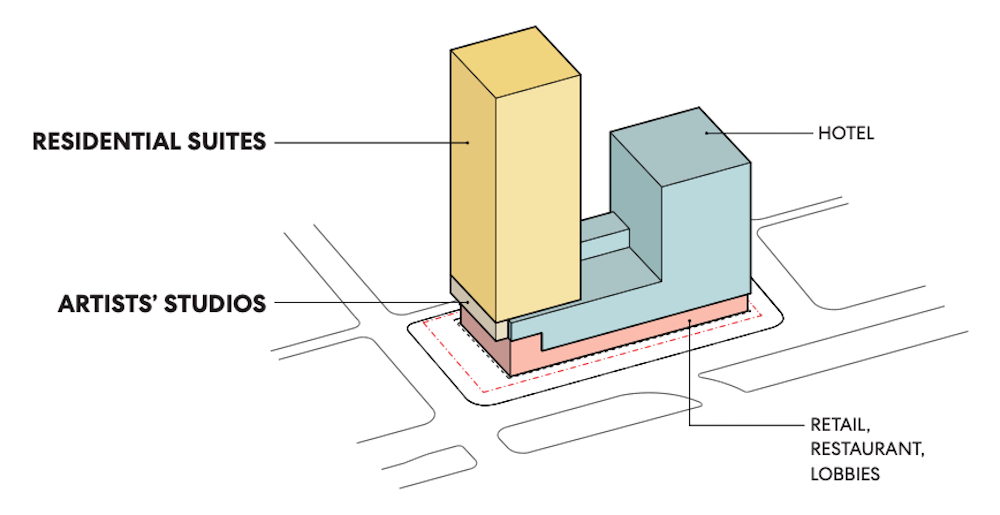 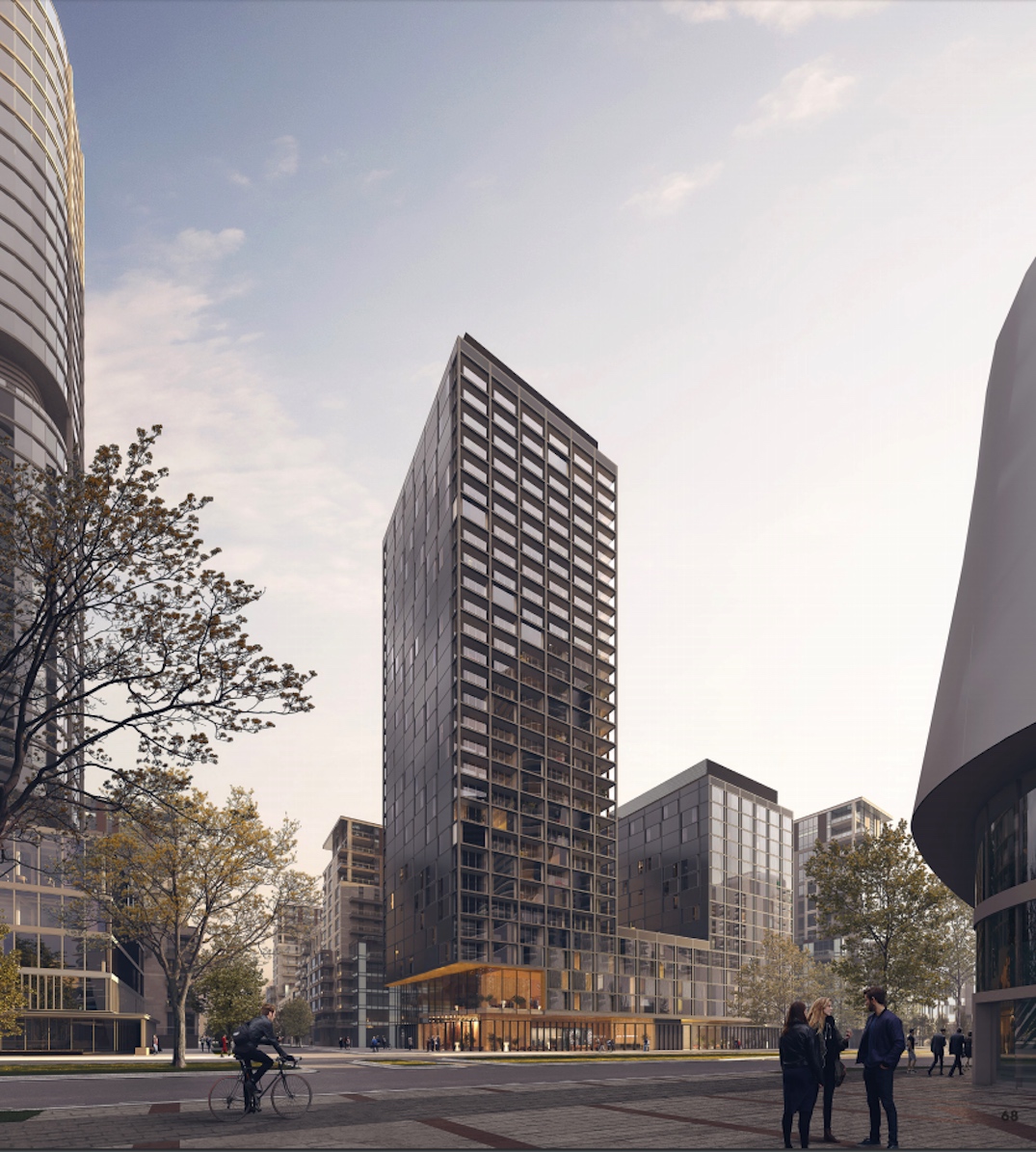 Building residents and hotel guests will share some of the building amenities, such as one of the fitness centres and certain lounge areas.

Specific amenities for hotel guests include an east-facing outdoor atrium plaza, various lounges, and an indoor and outdoor amenity space on the hotel tower’s 15th floor rooftop, including a guest-only fitness gym. 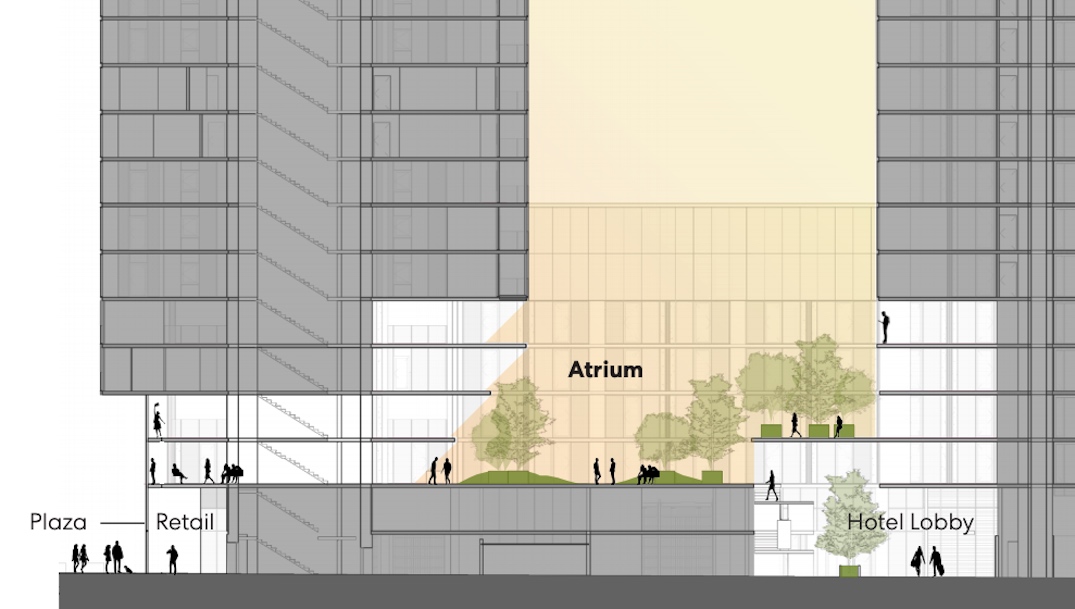 “A central atrium space at the podium levels allows light to penetrate into the centre of the floor plan. Visually extending the corridor spaces of the podium levels to the exterior facilitates access to views and natural light,” reads the design rationale.

“Connection to nature and optimal air quality are integral for our psychological health. Direct connections with nature will be provided through plantlife within the atrium space, as well as landscaped green spaces at the rooftops. Interior spaces will incorporate plantings and biophilia, to ensure access to nature is maintained for all occupants.”

As for the overall architectural form, the building takes on “simplicity and solid geometry” to provide contrast with the “organic expression of the much larger Oakridge development.” The use of an exterior grid reinforces “the quietness of the facade and connecting the human scale interior spaces with the urban realm.”

The redevelopment’s public realm will create a new public plaza on the city block’s northern end, facing West 43rd Street and where the building’s retail spaces are located.

This aligns with the Cambie Corridor Plan’s vision of creating a retail strip on West 43rd Avenue between Cambie Street and Alberta Street, which also enhances connections to Columbia Park. Ground-level commercial space is required for future developments along this one-block stretch. 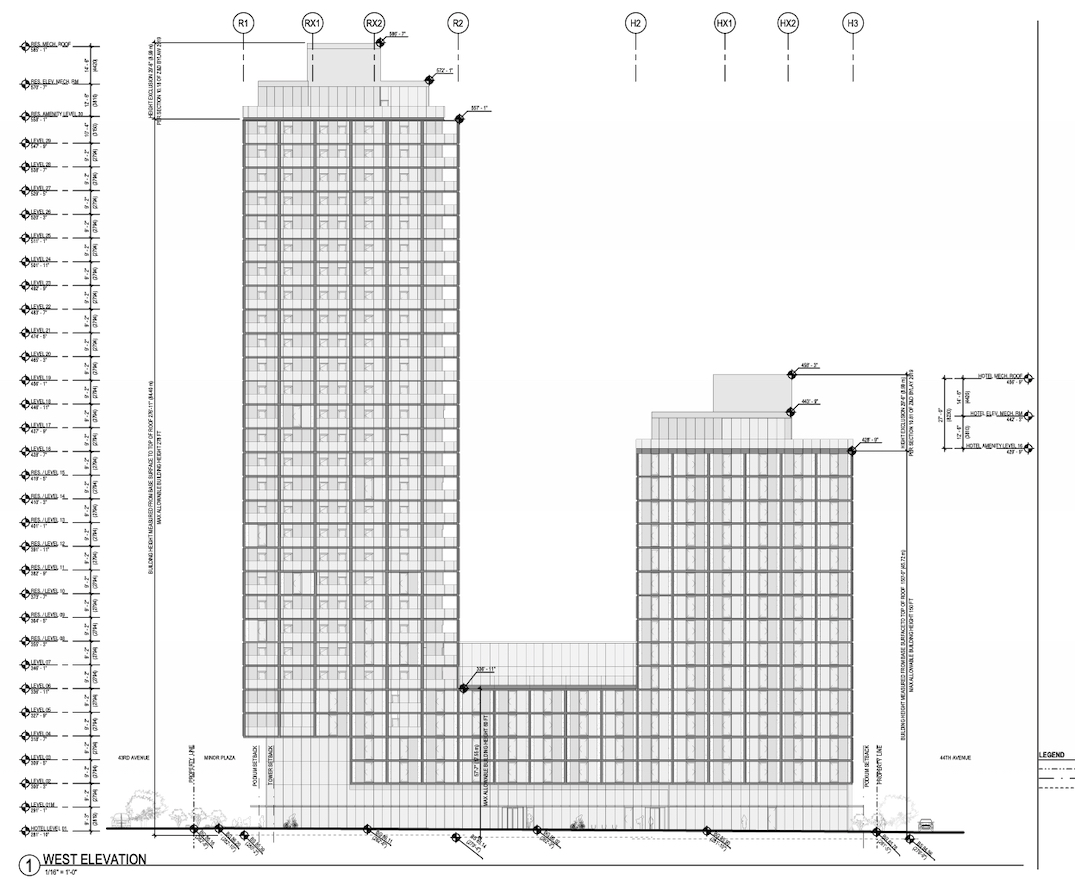 Other than the redevelopment of Oakridge Centre, the development site is adjacent to a number of sizeable proposals, including a 32-storey condominium tower and 12-storey office tower immediately north at 5844 Cambie Street, a 27-storey condominium tower and 14-storey market rental housing tower at 5740 Cambie Street, and an 18-storey secured rental housing tower for students at 475 West 42nd Avenue.

A nearby rental housing proposal at 357 West 41st Avenue with 22-storey and 14-storey towers initially included a 78-room hotel within two podium levels, but this hotel component was later removed in a revision that replaced it with more rental housing.