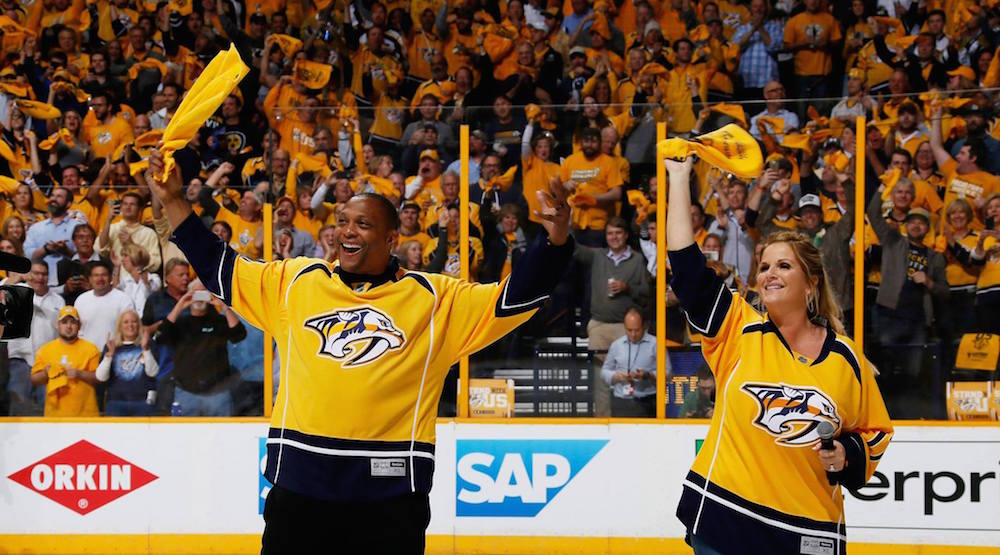 Predators fans in Nashville just experienced their first taste of the Stanley Cup Final in their city, and they crushed it.

No city has ever enjoyed the Cup Final like this in a 2-2 series. Sure, winning Game 3 and 4 on home ice had something to do with it, but we’ve never seen a crowd like this.

A non-traditional hockey market, Nashville is making the sport their own. And they’re doing a better job of it than Canada.

Bridgestone Arena, the home of the Preds, is the best place in the NHL to watch a hockey game. Better than the Bell Centre in Montreal, better than the Air Canada Centre in Toronto, and certainly better than Rogers Arena in Vancouver.

Does that mean they love hockey as much as Canadians? Of course not. It’s in our blood.

Canadians know the game, they’re passionate about the game, but they’re often cerebral in their approach. They wait for the team to get them excited.

Win or lose, Music City has got this hockey thing figured out.

We’ve seen sunbelt teams in the Stanley Cup Final before, but this feels different. Preds fans didn’t just hop on the bandwagon like Carolina did in 2006.

Nashville has sold out every home game this season. They did that for a team that finished eighth in the Western Conference, and a team that had previously never been past the second round of the playoffs.

So no, this isn’t a bandwagon story. It’s a story of a fanbase being rewarded for years of support.

Finally, for a team that joined the NHL in 1998, it all seems to be coming together. Their captain is the husband of local country star Carrie Underwood. They have the charisma of PK Subban.

They have a contending team.

Nashville will get one more chance to see their Preds on home ice, in Game 6, and this time, the Cup will be in the building.

Here are five reasons why Nashville, Tennessee is the best place to watch hockey right now:

1. They don’t wait for the team to get them excited

The chants begin even before the puck is dropped.

This is what fans yell during the announcement of the visiting team’s starting lineup every game:

One of the main reasons why Nashville has such a great atmosphere, and so many elaborate chants, is because of Cell Block 303.

The best supporters’ section in the NHL, they’re showing the league how it’s done.

Borrowing some chants from soccer, along with some creative original ones of their own, the energy in this section has spread throughout the arena.

Meet “The 7th Man.” Nashville crowd taunts Pens net-minder, Matt Murray with the most psychologically jarring chant that I’ve ever heard in an arena anywhere. “He Shoots, He scores, You Suck! Murray, Murray, Murray, Its all you’re fault, it’s all your fault, it’s all you’re fault!” 😂😀🤣 Hilarious! #hockey🏒 #stanleycupplayoffs @predsnhl @predsnhl @nashvilleabc

They’ve been around a long time, with their roots stemming from Nashville’s ECHL team in the early 1990s.

Their fans are loud and energetic throughout the entire game. And I mean the entire game. Preds fans have been known to give standing ovations during commercial breaks, and their chanting is legendary by NHL standards.

This is what a TV time out looks like in Nashville:

If a catfish gets thrown on the ice tonight, we might know who the culprits are… 👀#StanleyCup pic.twitter.com/Kct1NGhxL9

Apart from the energy in the crowd is a fun tradition that involves hurling a catfish onto the ice. They’ve been doing it for years, as a response to the Red Wings’ octopus tradition.

If you didn’t know about the catfish tradition before the Final, you knew about it after Game 1 when a visiting Preds fan snuck a the stinky fish into the arena in Pittsburgh and tossed it on the ice.

These are dedicated fans.