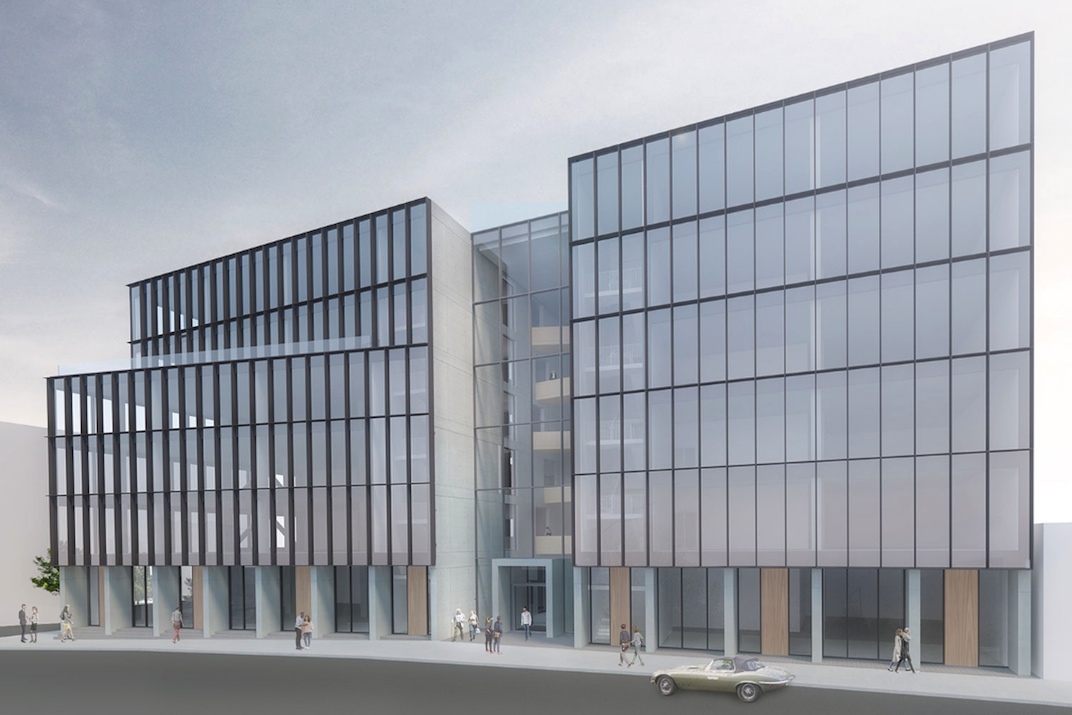 The project at 405 Railway Street will replace two existing buildings – one and two storeys – that currently house a number of businesses, including Inform Interiors and Bensen Manufacturing.

The 24,537-sq-ft property is immediately next to the waterfront railyard to the north and a few buildings west of Aritzia’s headquarters.

A development application submitted to the municipal government seeks to construct a six-storey, 100-ft-tall building with 1,615 sq. ft. of restaurant space on the ground level, 85,788 sq. ft. of manufacturing space between the ground and fourth levels, and 24,530 sq. ft. of office space within the fifth and sixth levels. The total floor area will be about 112,000 sq. ft., giving the project a floor space ratio density of 4.6 times the size of its lot area.

If approved, the project will be built in two phases, with an atrium and bridges connecting two building masses and the floor plates. The atrium also acts as a “generous main entrance to the building.”

“Each suite will have access to two central cores, organized around an atrium and connected by open bridges,” reads the design rationale by Office of McFarlane Biggar Architects & Designers.

“The cores will connect tenants to a robust loading facility located on the first parking level and accessed through a shared freight elevator. The atrium will provide a social hub for the occupants of the building, while also visually connecting their activities with the street.”

Three levels of underground parking will be accessed from the west on Dunlevy Avenue.

The project is seeking permission to redevelop the site under the recently created I-4 Historical Industrial Zoning District, which allows “creative products manufacturing” uses. Other mixed-use office and industrial redevelopments in the area include BENCH Railtown at 353 Railway Street and Maker Exchange at 494 Railway Street.