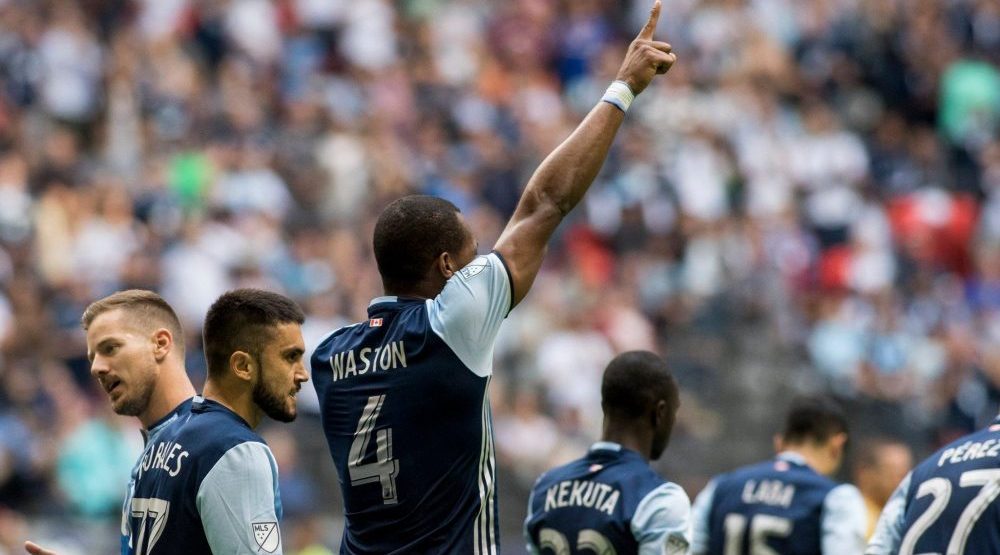 The Vancouver Whitecaps have seen their fair share of dramatic last-minute goals this season.

These late goals cost the ‘Caps the Voyageurs Cup and cost them countless valuable MLS league points as well.

In a complete reversal of the previous meeting between the Whitecaps and Rapids at BC Place, it was Vancouver’s turn to benefit from a lucky bounce in the dying seconds of the match.

Colorado took advantage of some sloppy Vancouver defending to open the scoring courtesy of Dominique Badji in the 8th minute. It was the only highlight in what was otherwise a fairly uneventful opening forty-five minutes.

“The first half was not good enough. Not acceptable. I let the players know that at half time,” said Whitecaps head coach Carl Robinson after the match. “We altered one or two things at the half, and the positives I’ll take out of it is that they showed tremendous fight, spirit and heart.”

Just put Barnes and Davies on the team sheet for the rest of the season. Bolaños too. Do whatever with the rest. #WhitecapsFC

After a short period of sustained pressure to start the second half, the Whitecaps won a series of corner kicks. Kendall Waston drew Vancouver level in the 51st minute after connecting with Christian Bolaños’ inswinging corner.

Then things got interesting.

Five minutes later Kendall Waston was sent off after tangling with Badji inside the Vancouver 18-yard box. The foul left referee Baldomero Toledo little choice, and Waston was sent for an early shower for the fourth time this season.

To their credit the Whitecaps did not crumble after being reduced to ten men. The Blue and White had several chances before Giles Barnes and Pedro Morales finally connected in the 70th minute to pull the Caps back on even terms with the Rapids.

Colorado’s Shkelzen Gashi, who had scored on the earlier penalty kick, put the visitors back in front with a stunning left footed free kick in the 75th minute. Gashi will certainly be in the running for MLS Goal of the Week after he curled the ball around the Vancouver defensive wall and beat a diving David Ousted at the far post.

Just when it looked as though they were going to be handed another loss, the Whitecaps finally caught a lucky break.

With seconds left in second half injury time Erik Hurtado stole a point for the Whitecaps after his header hit the crossbar and then bounced off defender Marc Burch before going into the net.

It was another good outing for Hurtado, who also added an assist on Morales’ goal and has now scored in three of his last four matches.

2. “That summed our season up”

There have been relatively few things for Whitecaps fans to feel good about over the past few months. Since July 1st the Whitecaps have a unimpressive record of 2W-7L-5D and will need an act of divine intervention to help them sneak into the playoffs.

“If we don’t qualify for the playoffs, it’s not about today,” said Robinson. “It’s about the points we’ve thrown away, and we’ve done it consistently. We’ve got a lot of work to do.”

Rapids miss out on two extra points of real value. 10-man 'Caps redeem themselves, but fortunate with a point…. #VANvCOL #MLS

The Whitecaps currently sit in seventh place in the Western Conference tied on 35 points with the Seattle Sounders.

With only three matches remaining the Whitecaps are well off the pace from their record breaking season last year. Not only are they 14 points off where they were this time last year, they have already conceded 13 more goals than they did all of 2015.

Despite dropping another two valuable points, there were a handful of positive stories for the Whitecaps against the Rapids.

In addition to the renaissance of Erik Hurtado, 15-year-old Alphonso Davies got his first MLS start and newcomer Giles Barnes had his best game yet for the Whitecaps.

Sadly, the focus remains on the Whitecaps’ (unlikely) chances of still making the playoffs. Their fate is now completely out of their hands, and Vancouver will have to run the table in their final three matches. In addition, the Whitecaps will need some extremely favourable results to help them qualify for the postseason.

With three very tough matchups against Seattle, San Jose and Portland coming up the Whitecaps have a monumental, if not nearly impossible, task ahead of them.