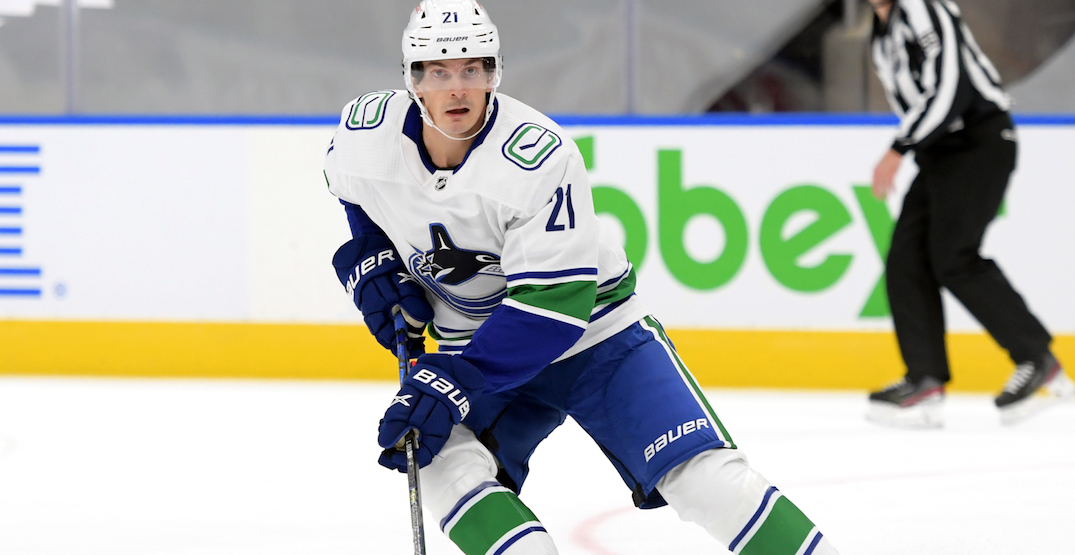 Let the madness begin, for the Vancouver Canucks and the other 31 NHL teams.

On July 13th, 311 unrestricted free agents will be looking for a job, according to Cap Friendly.

Here are 21 of those free agents who used to be Canucks.

His offensive game has clearly dissipated, but Eriksson did provide value for the Arizona Coyotes shorthanded, ranking second among forwards in 4-on-5 ice time.

He was in and out of the lineup as a healthy scratch while also battling through a lower-body injury.

After failing to stick around full-time in the Coyotes lineup, he could have trouble finding an NHL job for 2022-23.

If Roussel’s season was rough, you could classify Jay Beagle’s as disastrous.

The 36-year-old played just 33 games after missing significant time with a lower-body injury.

On top of all that, his season will be remembered most for his controversial pummeling of Troy Terry.

The New York Rangers loved what they got from Tyler Motte.

“He does everything we want from him…been really good, good and positive influence for our players,” Rangers head coach Gerard Gallant told the New York Post last month.

The New York Post has also reported that the Rangers are  “very, very likely” to re-sign Motte.

It appears as though Adam Gaudette’s NHL career is at a crossroads.

The 25-year-old went unqualified by the Ottawa Senators, making him an unrestricted free agent.

Perhaps Gaudette can blame the Canucks for his botched development, which former Abbotsford Canucks head coach Trent Cull alluded to in an earlier interview.

Among all the forwards on this list, no one had a better season than Sam Gagner.

This year in Detroit, he surpassed 30 points for the first time since 2017-18, and did it at a bargain cap hit.

Jimmy Vesey’s tenure as a Canuck was forgettable.

This year in New Jersey, however, he carved out a niche as a matchup forward and penalty-killing specialist.

Jimmy Vesey turns on the penalty-kill jets and finishes it with some silky hands to give the @NJDevils a 2-1 lead. 🚀 pic.twitter.com/h5SNkWQuK9

Josh Leivo’s career was derailed by a fractured kneecap he suffered while playing for the Vancouver Canucks, and he only suited up for seven games this season with the Carolina Hurricanes.

However, Leivo could be on the upswing. He was an absolute beast for the Calder Cup-winning Chicago Wolves in the AHL playoffs. He led his teammates with 15 goals and 29 points in just 18 games.

A poster-boy for the failed Jim Benning/Willie Desjardins era, Michael Chaput spent the entire season with the Pittsburgh Penguins AHL affiliate in Wilkes-Barre.

Despite being recalled twice, he never got into an NHL game.

Chaput’s last NHL goal actually came with the Canucks back on March 3rd, 2017. He’s gone 72 straight NHL games since without a goal.

The long-tenured Canucks’ defenceman had a stellar year with the Los Angeles Kings, playing at a 38-point pace while handling a plethora of tough matchups.

All quiet for UFA defenseman Alex Edler and Troy Stecher.

Both are in waiting mode, lots of defenseman in L.A to deal with.

Erik Gudbranson revitalized his career with the Calgary Flames this season, setting a career-high with 17 points while settling in as a solid, third-pairing defenceman.

The Flames were Gudbranson’s fifth team since getting traded from Vancouver in 2019.

He was mainly a healthy scratch with the lowly Detroit Red Wings before he was traded at the deadline to the Los Angeles Kings, where he was reunited with his old partner, Edler.

Then in the playoffs, Stecher surpassed his regular-season point total with two goals and four points in four games.

the kings jump out to a 1-0 start. troy stecher with his second goal in as many game. pic.twitter.com/FPEh8cz4SY

Jordie Benn had an unspectacular season with the Minnesota Wild, acting as a seventh defenceman while posting the worst expected goals-against metric among all Wild blueliners.

Although Kevin Connauton never played NHL games for the  Canucks, he was a high draft pick by the organization, and he’s gone on to carve out an NHL career as a depth defender.

This season, he played for his fifth and sixth NHL teams after being claimed off waivers from the Florida Panthers by the Philadelphia Flyers back in December.

Another poster-boy for Benning’s multiple failed attempts at unearthing quality defencemen, Derrick Pouliot stuck around in the NHL late in the season after being claimed off of waivers from the Vegas Golden Knights by the Seattle Kraken.

Adam Clendening has played for five different NHL teams since leaving Vancouver, although he hasn’t played NHL games since suiting up for the Columbus Blue Jackets in the 2019 playoffs.

He spent the last season playing with the Flyers farm team in Lehigh Valley.

“The Bulldog” managed to sneak into two games this season for the Toronto Maple Leafs, before being traded to the Nashville Predators at the trade deadline.

This was the first time he spent the majority of the season in the AHL since 2014-15, when he played for the Utica Comets.

Brogan Rafferty torched the AHL last season with the Comets before departing to the Anaheim Ducks in free agency. However, he saw a hefty dip in his point totals and didn’t get a sniff at NHL action.

After a rough season in Vancouver, Braden Holtby revitalized his career with a good performance for the Dallas Stars.

With a thin UFA market for goaltenders, Holtby should have lots of options for next season.

Louis Domingue was thrust into six playoff games for the Pittsburgh Penguins, despite playing three NHL regular-season games since being traded to the Canucks in February 2020.

He held down the fort with solid yet unspectacular goaltending in the playoffs, going 3-3 with a .898 save percentage.

In one of the best feel-good stories of the NHL season, Cory Schneider made his return to the NHL for the first time since March, 2020.

Playing for the New York Islanders, he defeated his former team, the New Jersey Devils, 4-3 back on April 3rd.