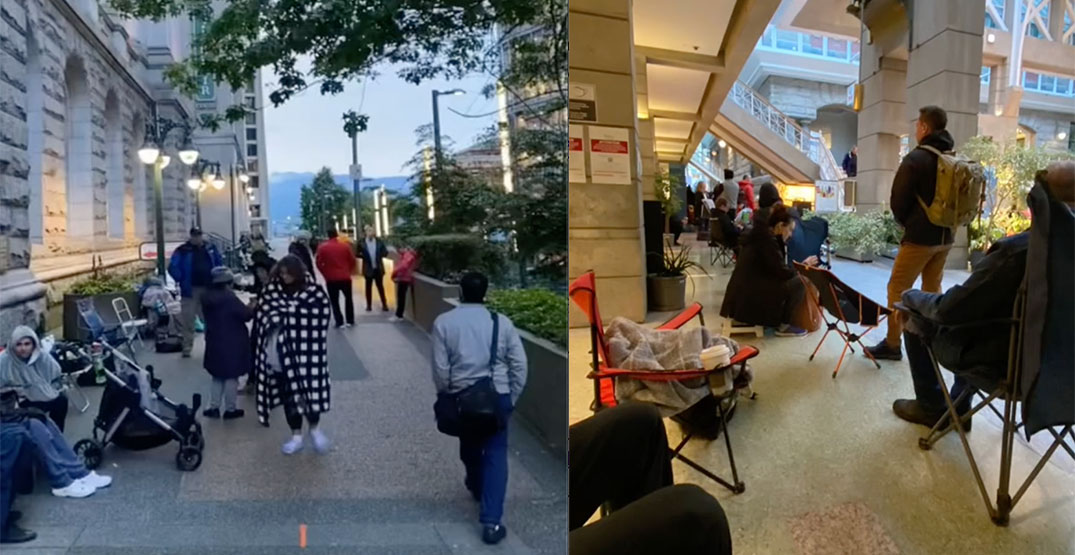 A Vancouver woman took to TikTok to share her 17-hour campout in downtown Vancouver to get a new passport for her upcoming trip to Mexico.

Sophia Kim said she and her partner both applied for new passports by mail back in February, but her partner never got his. They needed to apply for a file transfer at the Sinclair Centre in Vancouver, and they recorded the process.

They arrived at 11 pm, and Kim said she was already 36th in line for an appointment the following day. She shared a video of how she spent the night tucked under a blanket in a camping chair on the street.

By 5 am the sun was beginning to rise and there were more than 100 people in line, according to Kim’s TikTok. By 8 am, she made it inside, where many people were still sitting in camping chairs.

At 2:45 pm, she shared a photo from inside a car, saying they’d finally accomplished the task. In all, they spent close to 17 hours at the Service Canada location.

According to Kim, there were only three workers at the Service Canada office and they were dealing with computer problems — only 38 had been helped that day.

“Finally ready for Mexico,” she captioned her video.

Some Metro Vancouverites have taken to extremes to renew their passports amid the post-pandemic rush. One woman took a flight to Edmonton for a shorter wait time, and another person waited outside the Surrey location for three days. In addition, people have been charging hundreds of dollars to hold spots in passport lineups.

She issued a statement Thursday regarding the wait times, saying she was “deeply concerned about the delivery of passport services to Canadians.”

Gould says she has directed officials in her department and at Service Canada to work to find and implement solutions to these problems, which include implementing measures to make waits at specialized passport sites more predictable and manageable.

“Given the large crowds and lineups for passport services in urban centres, Service Canada is implementing new triage measures to provide a more intensive, client-specific approach,” the minister said.

Gould says workers will be prioritizing service to those with urgent travel needs within the following 24 to 48 hours and will also be directing clients with longer-term travel plans to the most appropriate service channels to ensure their passport needs are met and their travel is not interrupted.