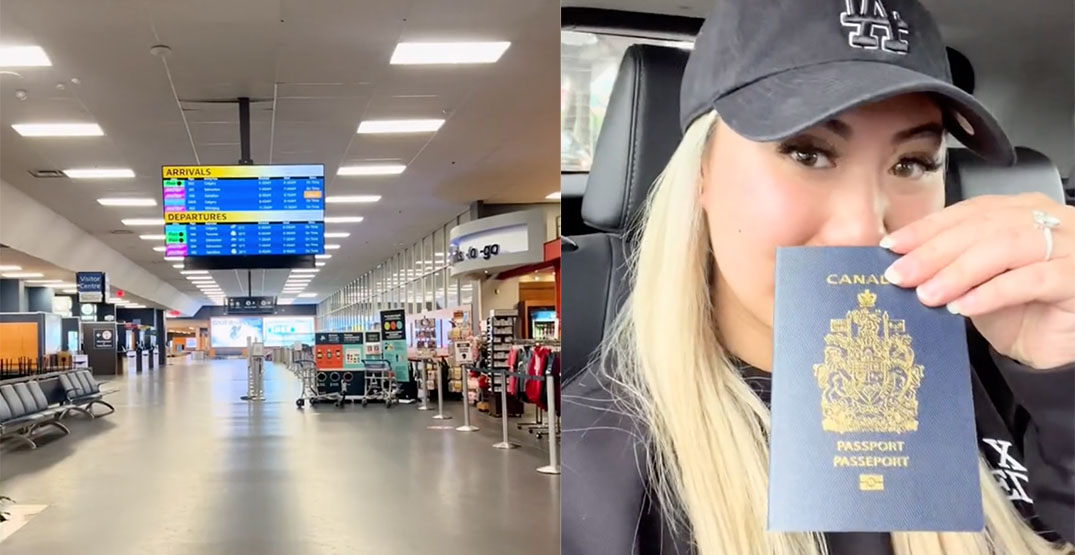 A Metro Vancouver TikToker appears to have found a hack to getting your passport renewed a little quicker — but it involves a very long journey.

Whitney, who goes by @twofoodpiggies on TikTok, interrupted her usual restaurant content this week to reveal how she got her passport in under three hours when lines at Metro Vancouver offices typically stretch longer than seven.

The crafty traveller booked a flight from Abbotsford, BC to Edmonton, Alberta this week to get a new passport at that city’s office. She had lost hers, and needed to see an agent to get a new one for her upcoming trip.

She booked an online appointment at the office the day before her flight, and grabbed an $87 roundtrip ticket with Flair.

She filmed her journey to the airport, and her visit to the Edmonton passport office on Jasper Avenue. She entered the office at 1:30 pm, and walked out with her passport at 3:55 pm — and posed with it on video once she had it in her hand.

In all she paid $315 in passport fees, $87 for airfare, and transport costs in Edmonton. She’s happy with her decision because people in Vancouver are lining up overnight or paying hundred for other people to hold their spot in line.

“Going to Edmonton was much more worth it than camping out in YVR,” she wrote on TikTok.

Getting the appointment required constantly checking online for an opening, and on her video’s comments she encouraged other users to do the same.

“She tricked the matrix,” one viewer wrote.

“Literally going to another province to make it happen,” said another.

There’s been lineup chaos this spring at Service Canada offices as people clamour to renew their passports after two years of staying home due to COVID-19.

Employment and Social Development Canada, the government branch that manages Service Canada offices, has hired more staff and introduced an online wait-time monitor to deal with the pandemic travel backlog.

Daily Hive has reached out to Whitney for further comment.