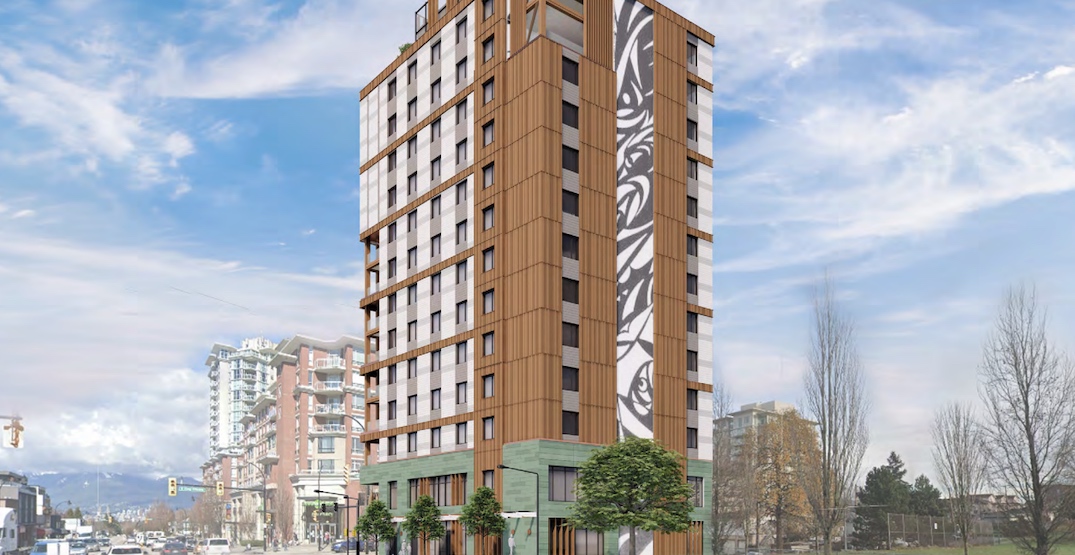 Supportive housing units for over 100 people to help address Vancouver’s homelessness crisis, with specific attention to the Indigenous community, have been green-lighted for Vancouver’s Kensington-Cedar Cottage neighbourhood.

In a public hearing Tuesday night, Vancouver City Council approved BC Housing’s rezoning application for 1406-1410 East King Edward Avenue — a vacant lot on the southeast corner of the intersection of Knight Street and East King Edward, right next to Kingcrest Park and across from King Edward Village.

The decision was unanimous, with City Council voting 8-0 in support of the project. Mayor Kennedy Stewart, NPA Councillor Melissa De Genova, and TEAM Councillor Colleen Hardwick were absent from the vote.

The 177 ft tall (54 metre), 14-storey tower — including a partial rooftop floor for an indoor amenity space that opens up to an outdoor amenity area — will contain 109 supportive housing units, each with its own washroom, kitchen, living area, and storage. 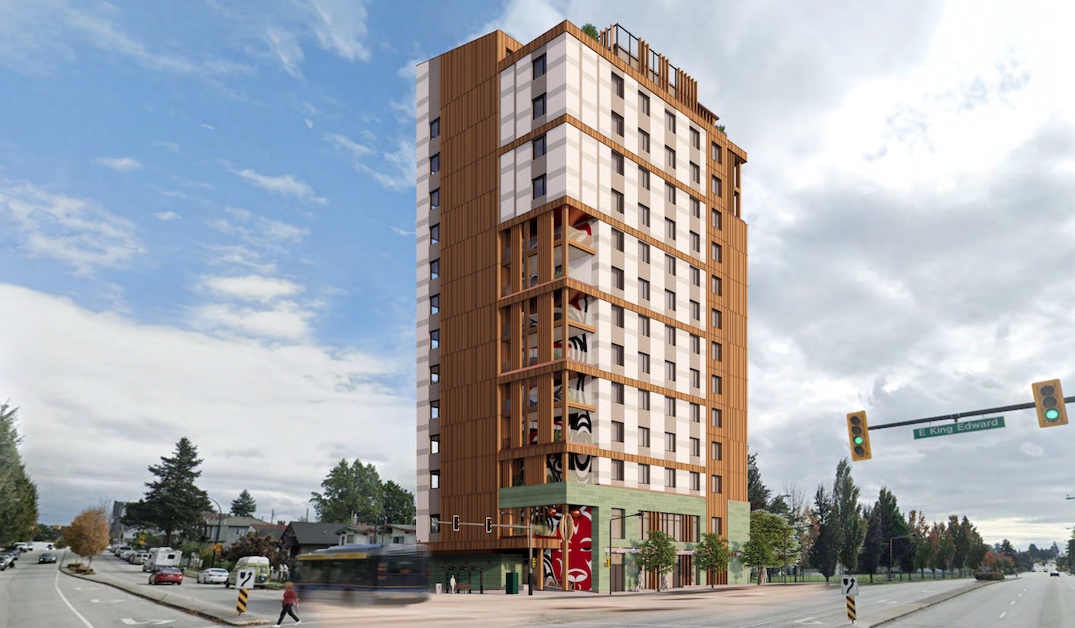 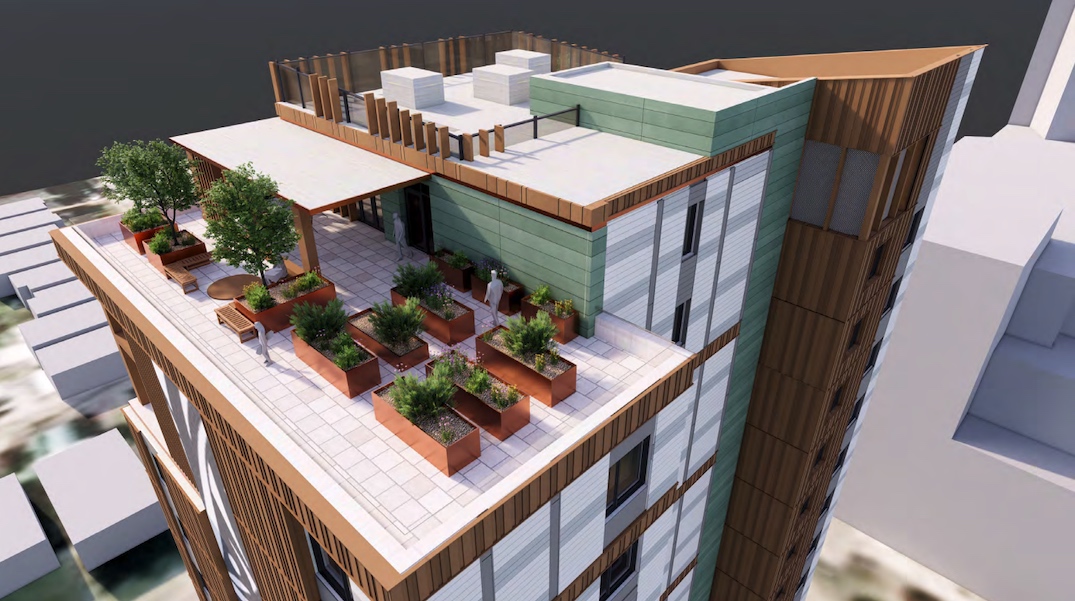 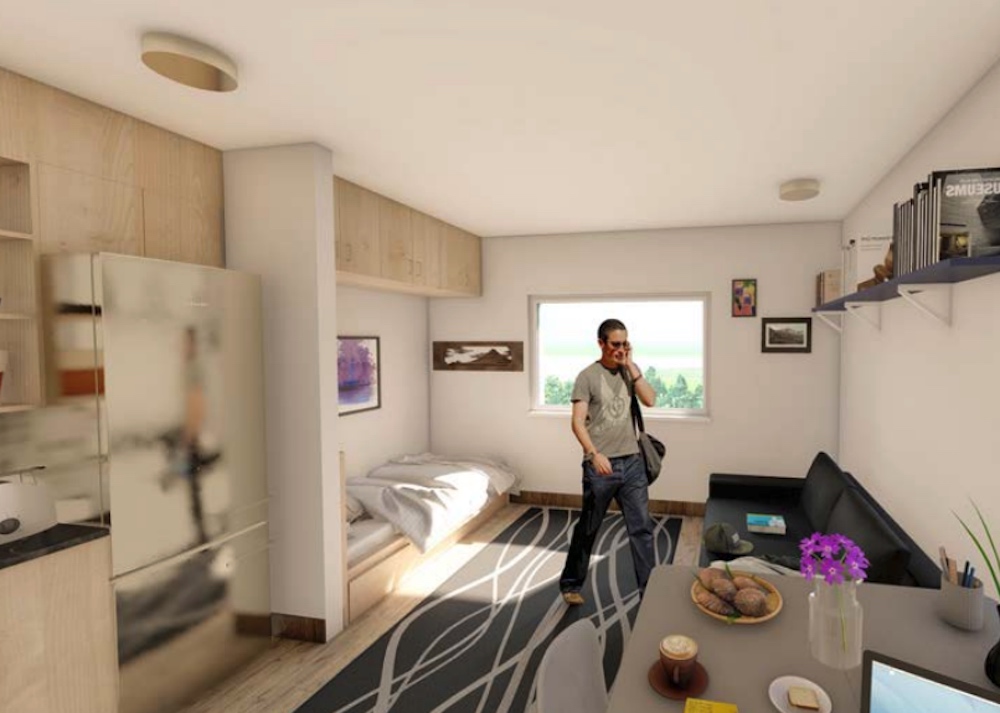 The base of the building will include a commercial kitchen, dining room, multipurpose room, tenant laundry, and support services. Vancouver Native Housing Society and Vancouver Aboriginal Friendship Centre Society have been chosen as the building’s operators.

Designed by Stantec Architecture and Stack Modular, the building will use a pre-fabricated modular method of construction to reduce costs and expedite the construction process, yet it will also reach a Passive House green building design standard.

The building’s architecture takes inspiration from Coast Salish First Nations designs, with the facade highlighted by timber-like panels to soften the modular appearance. It also provides open exterior surfaces that can potentially serve as a canvas in the future for Indigenous art, murals, and sculptures. 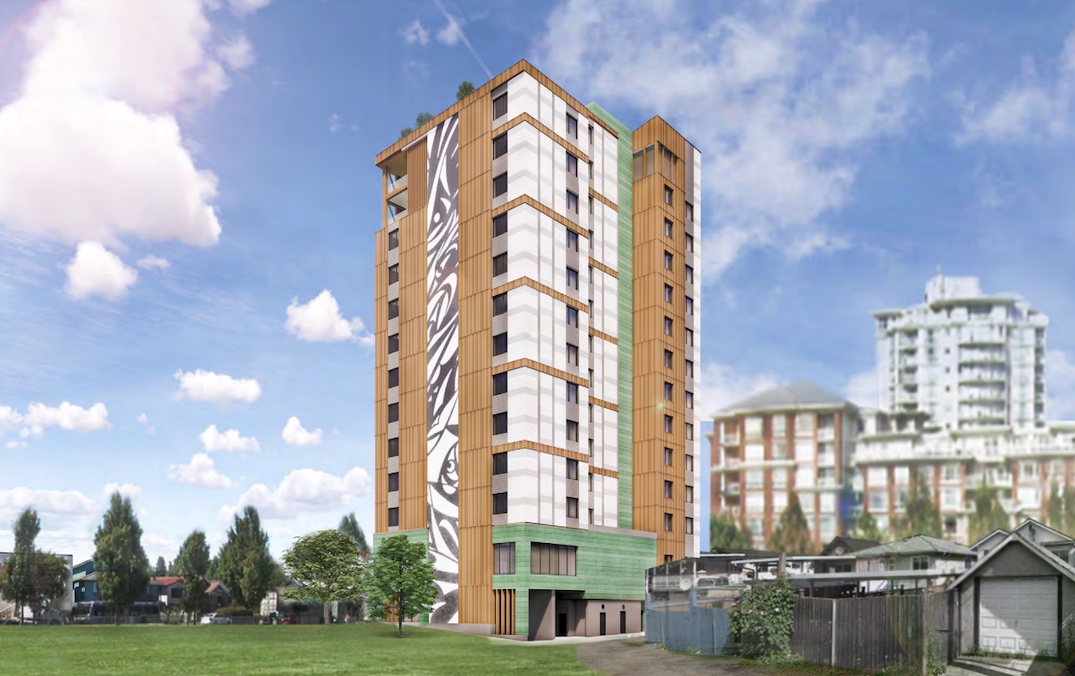 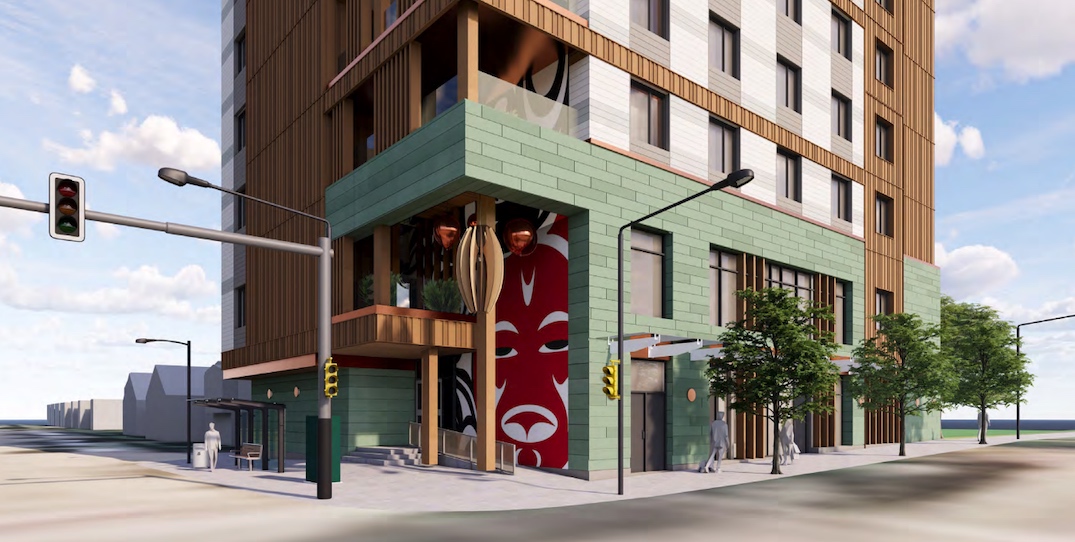 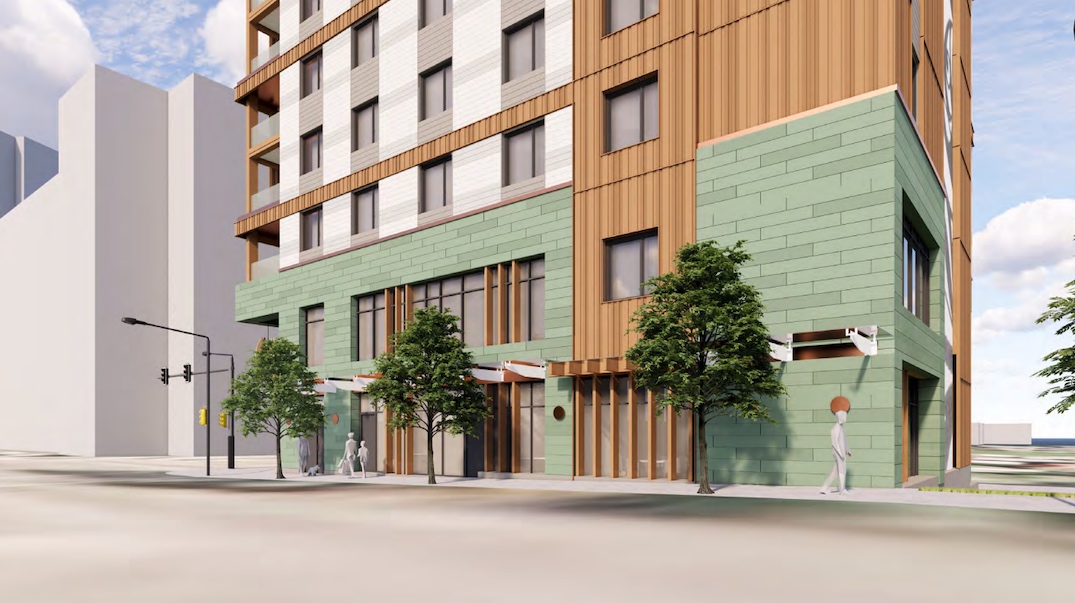 In a highly unusual move for this city council, the public hearing on this application was extended well beyond City Council’s usual 10 pm cutoff to finish this agenda item, with the vote reached at about 11:30 pm. The reason: this City Council, which has been criticized for its inefficiencies, has a very compressed pre-election schedule in the weeks to come on major rezoning applications and policy decisions; this public hearing was the first of a series of at least seven scheduled public hearings dates through the end of July.

The forthcoming public hearing on deciding BC Housing’s rezoning application for a supportive housing tower next to SkyTrain’s future Arbutus Station in Kitsilano is bound to be far more protracted and heated.

Both the Kensington-Cedar Cottage and Kitsilano supportive housing projects are part of a 2020-signed agreement between BC Housing, Canada Mortgage and Housing Corporation, and the City of Vancouver to build permanent supportive housing using modular construction on city-owned properties, as a quick way to help address the worsening homeless crisis.

There is a real need for more social and supportive housing to assist individuals experiencing or at risk of homelessness, and a need to disperse such housing complexes across the city and region — beyond their traditional concentration within the downtown Vancouver peninsula, specifically the Downtown Eastside and in Downtown South (Granville Street).

But over the last two years, apprehension for such projects has grown in other neighbourhoods where they are proposed — wariness fuelled by the conditions of some of the recently implemented sites, and the very visible deterioration of the area.

Real concerns over area-specific violent crime, theft, vandalism, and public disorder associated with the newly established presence of supportive housing, overdose prevention sites (OPS), and encampments were unaddressed over a prolonged period, if not completely ignored. Supportive housing and OPS facilities are operated by non-profit housing operators, with the support of BC Housing, the municipal government, and the local health authority.

Residents near the Yaletown OPS, for instance, have publicly documented an almost daily frequency of incidents outside the facility, and asserted the non-profit operator has clearly violated the “good neighbour agreement” stipulated by Vancouver City Council at the time of the location’s endorsement in October 2020. They assert a lack of accountability from the operators. 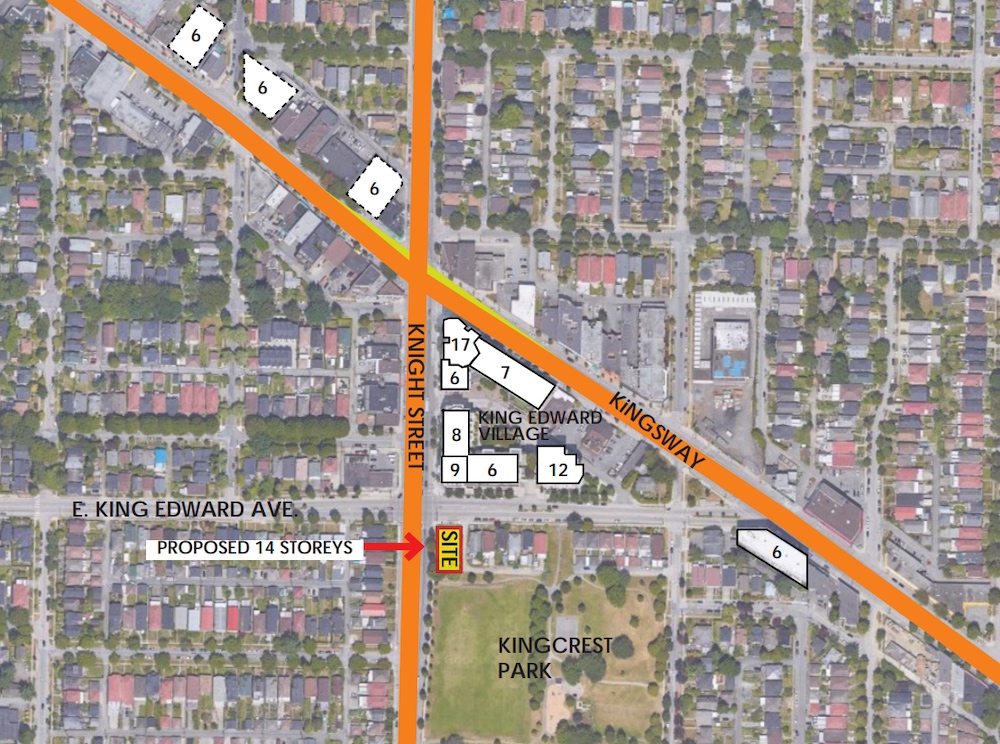 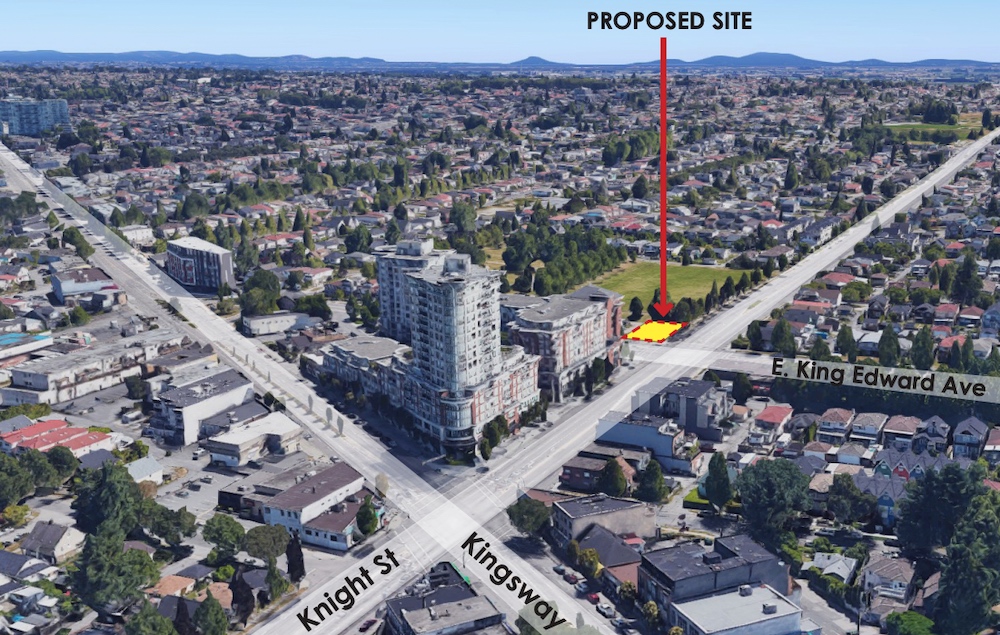 Last night, Kensington-Cedar Cottage resident Matthew Nguyen was one of the public speakers who voiced his opposition to BC Housing’s proposal for these reasons. He also suggested inadequate public consultation was performed with the area’s very significant non-English speaking community, who remain largely unaware of this project in their neighbourhood.

“You guys haven’t said anything about the community itself. There’s a significant Vietnamese population here, as well as Filipinos and especially Chinese. Nothing, you haven’t said a word about them. Many of these folks are pensioners, they are young families with young children, and you’re going to bring these folks into our neighbourhood?” said Nguyen.

“There’s a library, a park, multiple schools, and two daycares in the area, and you want to bring these folks in. Yes, there’s a need for housing, but the answer is not plopping it in the middle of a hardworking blue-collar neighbourhood that has little time to call in, sit here for three hours, and voice their concerns. All of your proposals sound great on paper, but let’s look at all of the SROs in the Downtown Eastside or any area in Vancouver that houses an SRO — what happens to the surrounding community? How long until the Save-On-Foods across the street doubles its security?”

COPE Councillor Jean Swanson, who visibly appeared uncomfortable with these comments, urged Nguyen to not make broad generalizations about the building’s future residents. She also asserted supportive housing projects are not always problematic for the host neighbourhood.

“We need about 40 more of these [projects]. I live in a neighbourhood that has two supportive housing places where people moved in from the Oppenheimer Park encampment… I’ve never seen a needle in the neighbourhood ever,” said Swanson. 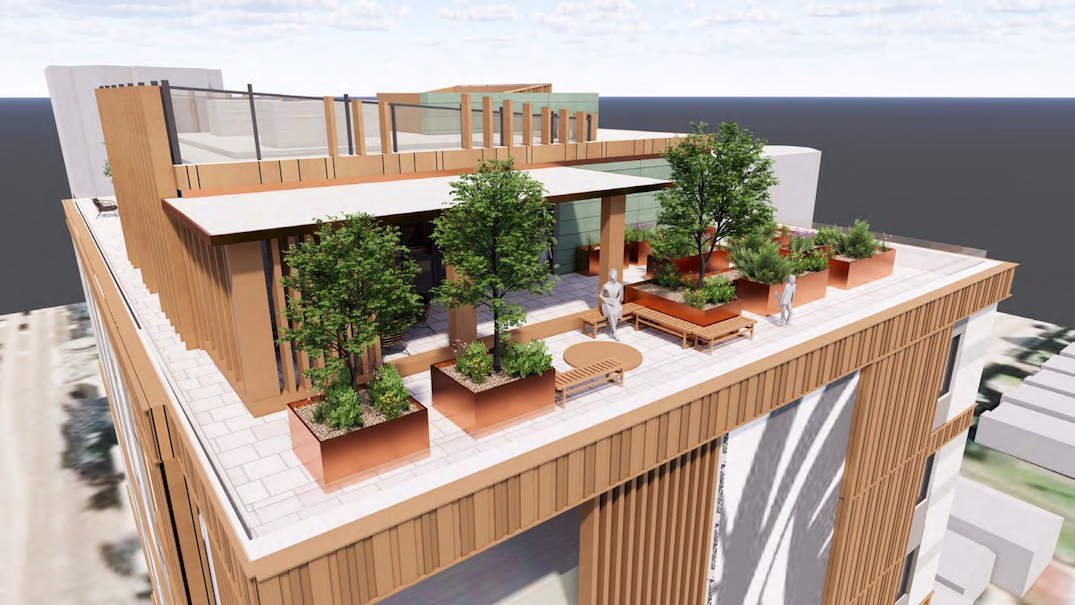 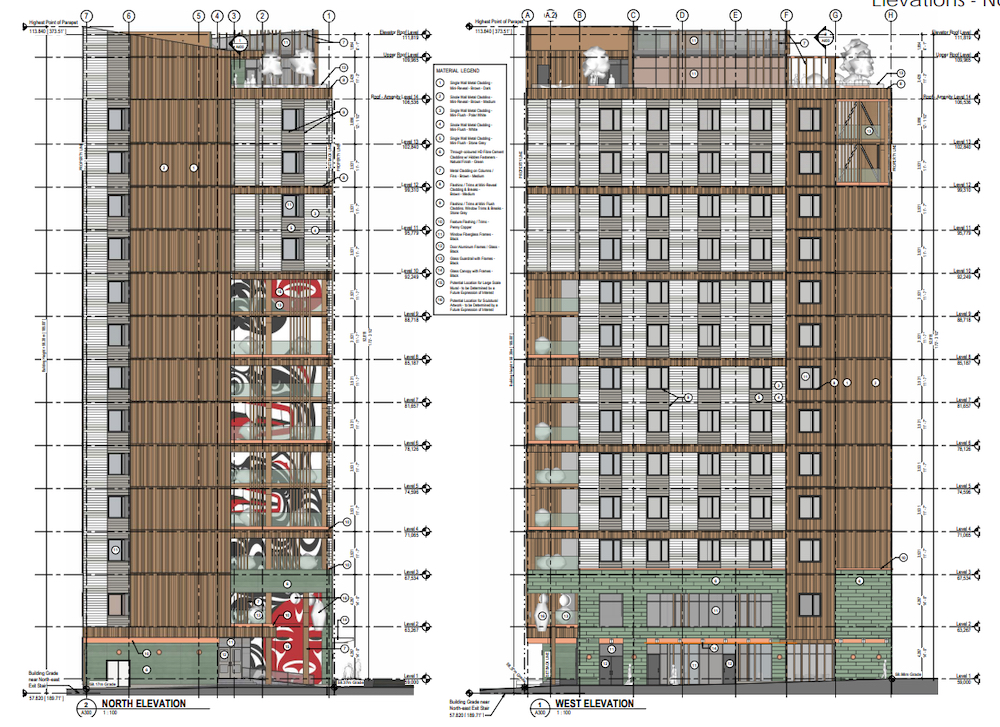 ABC Councillor Lisa Dominato also commented: “I think there is at times a lot of information that is lacking when these proposals come forward for the public to understand. I think there are times when we have the benefit of seeing those in action, and how they are operating. I appreciate this is Indigenous-led and focused… Stable housing is very much a gateway for the ability to build upward in our lives. What I heard from BC Housing is there will be additional wrap-around supports and services embedded into these homes.”

With City Council’s rezoning approval now secured, construction on the building could begin later in 2022. 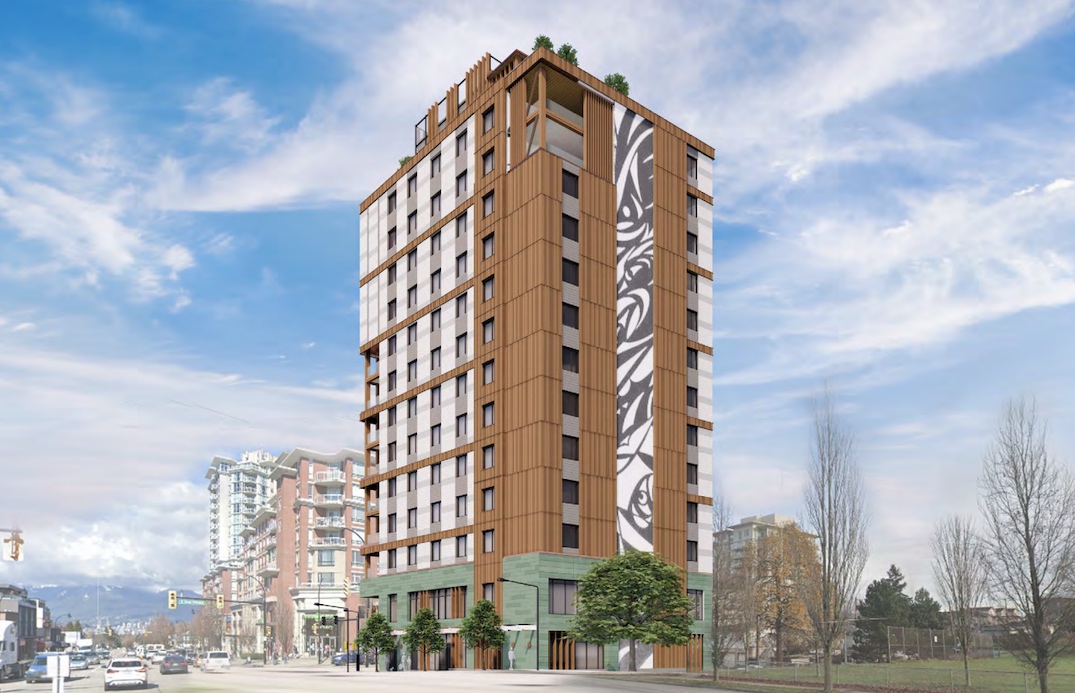