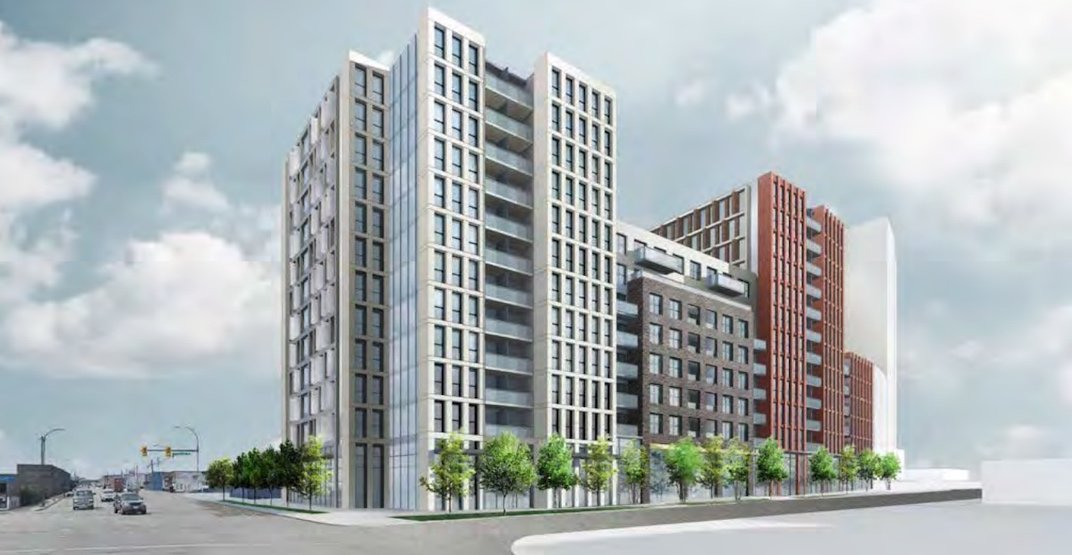 A relatively large mixed-use redevelopment has been proposed for the southwest corner of the intersection of East Hastings Street and Clark Drive, on the easternmost edge of Vancouver’s Downtown Eastside area.

Local developer Onni Group has submitted a rezoning application to turn a 31,000-sq-ft site at 1220-1298 East Hastings Street — currently occupied by five lots with one- and two-storey commercial buildings — into three buildings with a total of 207 new homes.

The existing retail building facing the intersection’s corner was the original location of Yolk’s Restaurant & Commissary, until it relocated in 2017 to a new home two blocks down the street. 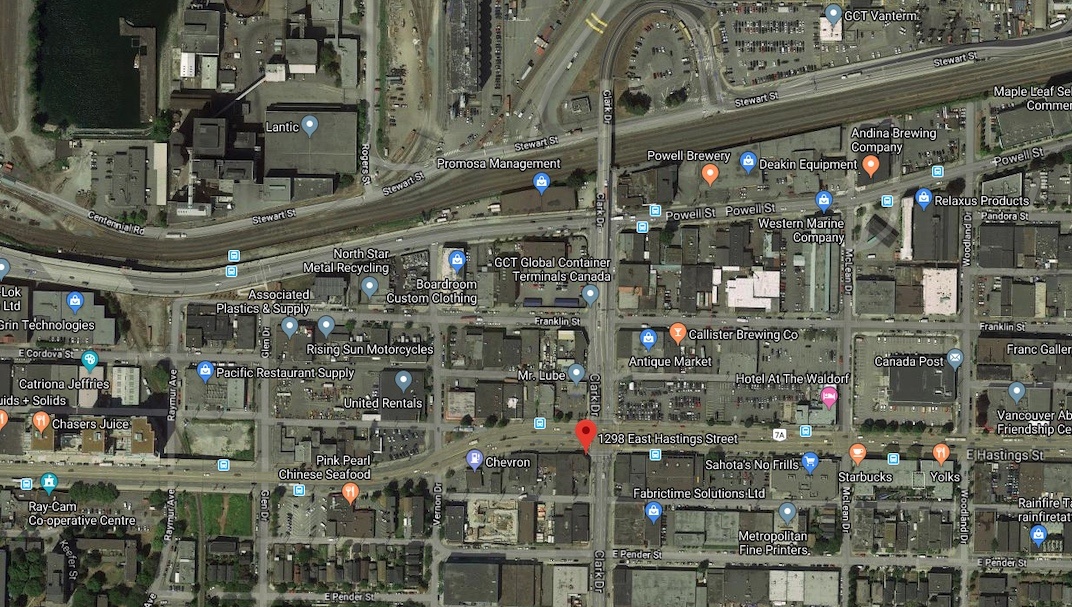 Each building includes separate amenity facilities, including a combination of indoor and outdoor spaces such as children’s play areas and urban agriculture opportunities. 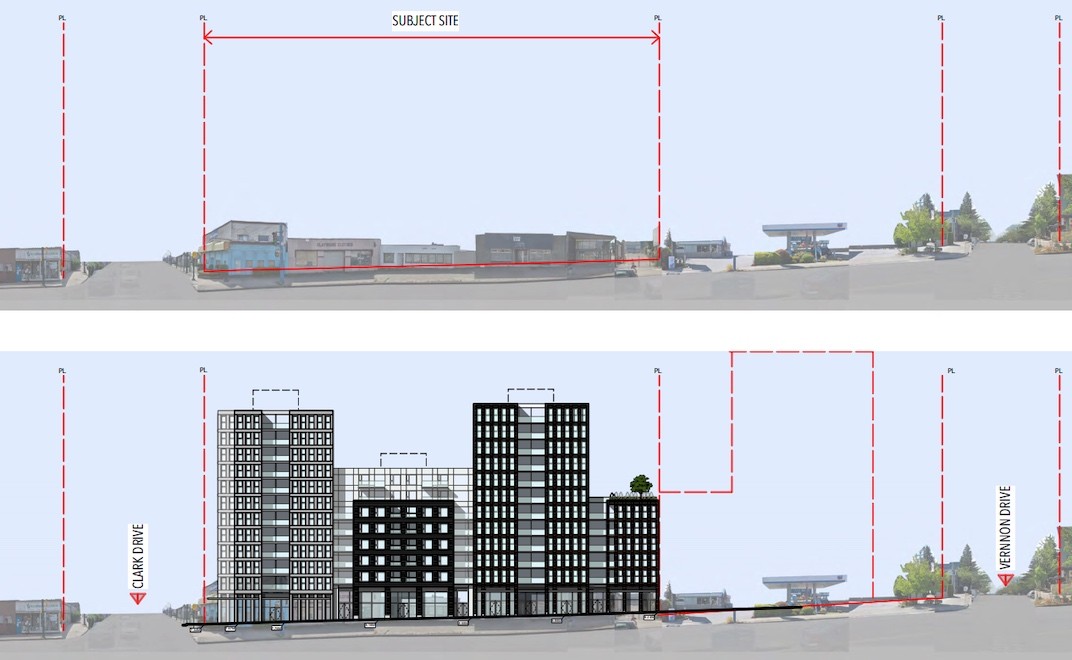 The entire East Hastings Street ground-level frontage is activated by 9,709 sq. ft. of restaurant and retail space, which is enhanced by a generous curb setback of at least 18 ft to enhance the public realm and provide the restaurant spaces with patio capability.

According to the design rationale by Yamamoto Architecture, the alternating height of the multi-building redevelopment creates a “sawtooth pattern” that mimics the smaller frontages established by the historic areas of Hastings Street. This is further emphasized by the varying facade designs for each building.

“The elevations facing East Hastings Street borrow from the historic and heritage buildings of East Hastings, distilling their plinth, column, and cornice elements into an abstracted grid. In this way, the historic building character and scale is reinterpreted through a contemporary design and material approach,” reads the design rationale. 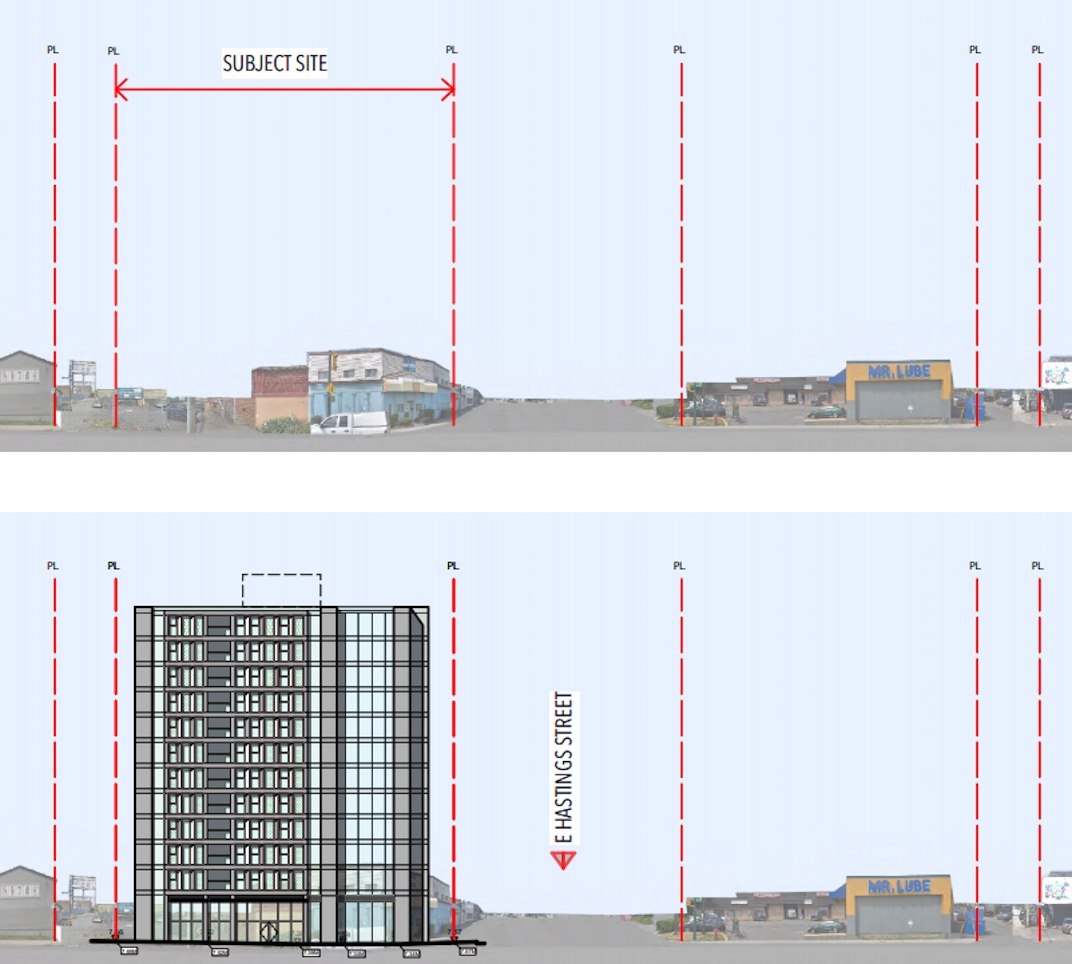 All three buildings will share a three-level underground parkade with 229 vehicle parking stalls.

Altogether, this proposal calls for 186,000 sq. ft. of floor area, giving it a floor space ratio density of six times the size of the land assembly.

This project’s social housing component consolidates the requirements of both this site and the developer’s proposal for 560 Raymur Avenue, which is being rezoned concurrently with 1220-1298 East Hastings Street.