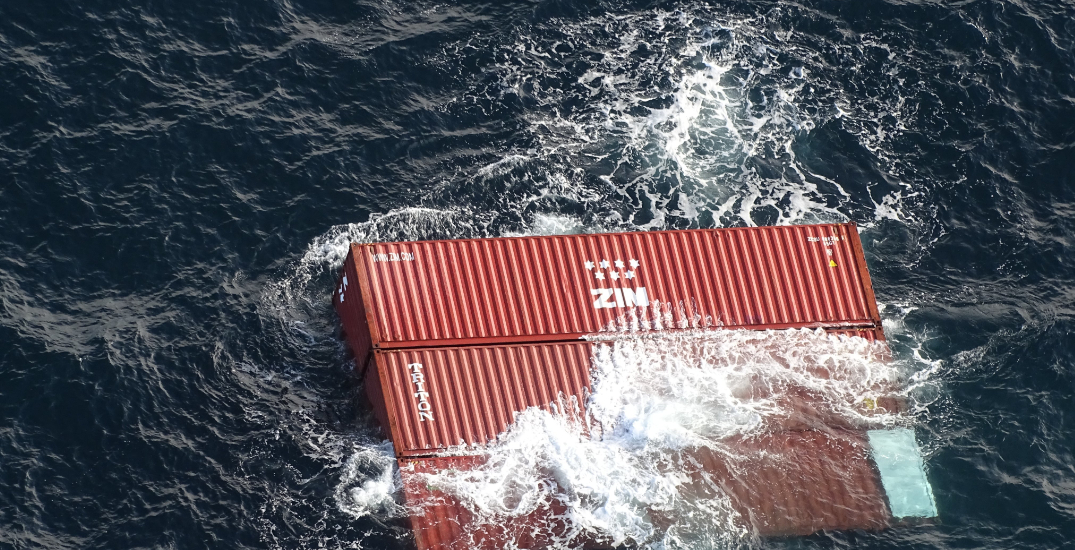 There has been no sign of the 105 shipping containers that fell off a cargo ship near Victoria last month, and the Canadian Coast Guard believes many, if not all, have sunk.

In late October, a total of 109 shipping containers were thrown from the MV Zim Kingston when the vessel encountered rough seas near the Juan de Fuca Strait.

In a statement to Daily Hive, a spokesperson for the Coast Guard said that so far, just four containers have washed ashore along a northern stretch of Vancouver Island.

“There has been no sign of the other 105 containers, and Unified Command believes that many, if not all, of the missing containers have sunk,” the spokesperson said.

“If a container does surface, it will be removed from the marine environment.”

The Coast Guard is currently working with the owner of the Zim Kingston to determine the next steps and to “assess the feasibility” of trying to locate the missing containers.

While cleanup of the beached containers is ongoing, the spokesperson said it had been hampered by weather, high tides, and storm swells in recent days.

Operations at Grant Bay, Guise Beach, and Palmerston Beach are currently delayed, although the sites have been secured to protect them from high tides and storm swells.

At Raft Cove, crews cleared 167 garbage bags of materials and 69 bulk bags of debris, and the container will be cut apart over the coming days.

Any members of the public, mariners, or pilots who spot the missing containers are asked to contact the Coast Guard at 1-800-889-8852 or radio them on channel 16.