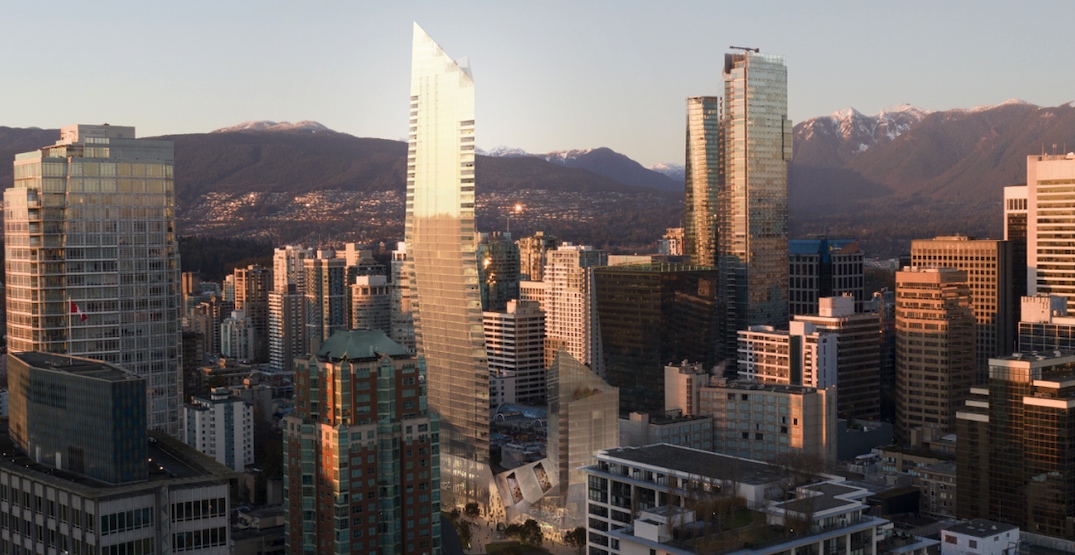 Preliminary plans for a proposal to build a landmark 580-ft-tall, 55-storey tower on Thurlow Street just south of Robson Street have just been revealed.

Local developer Intracorp is proposing to redevelop 1045 Haro Street — the northeast corner of the intersection of Haro Street and Thurlow Street.

The property is currently occupied by a 1980-built, seven-storey building with 160 apartment units and a three-storey commercial wing, with retail and restaurant spaces on the ground level fronting Thurlow Street, including the Guu Original Thurlow restaurant. The developer acquired the property for $165 million in March 2017. 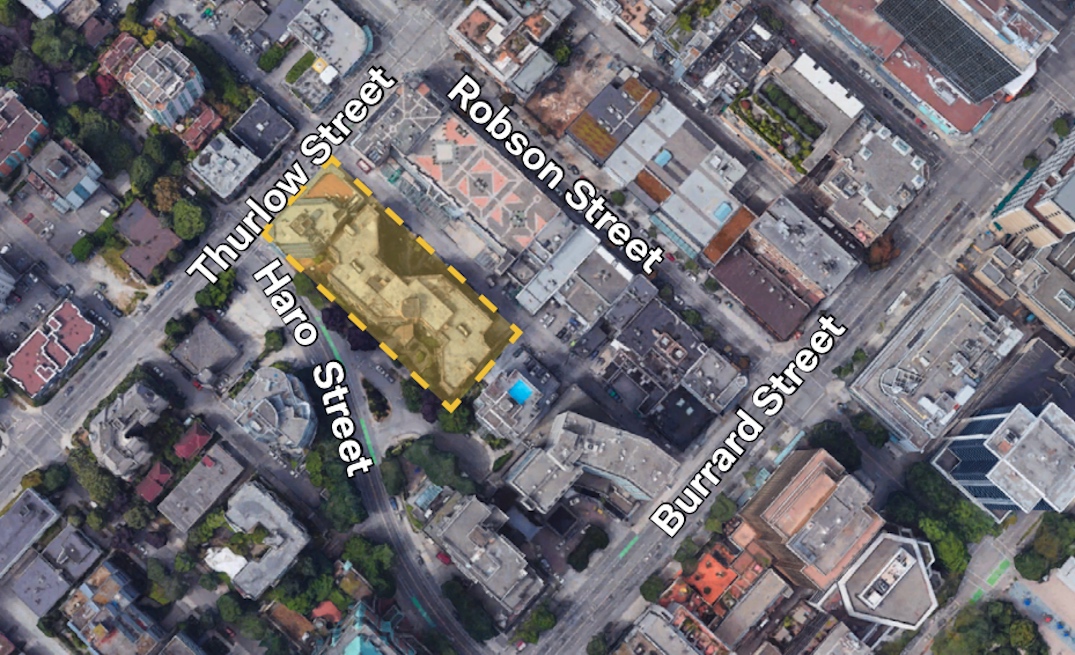 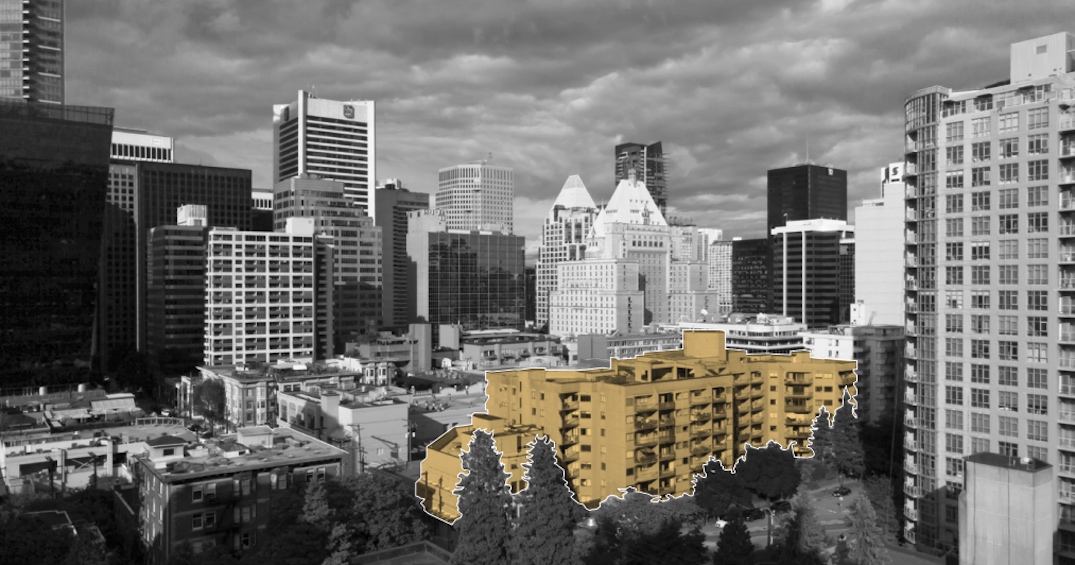 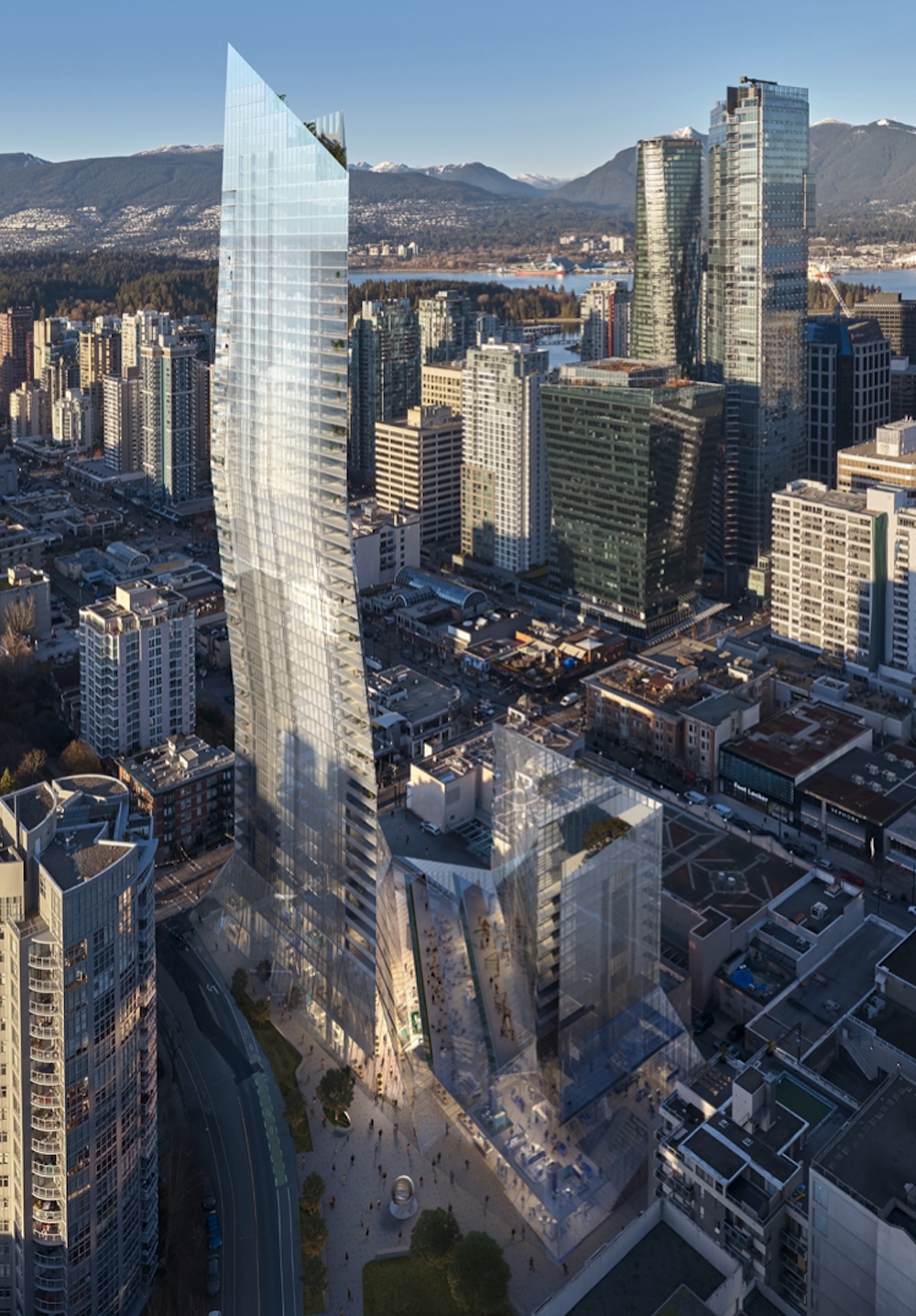 A diagonal mid-block pedestrian connection is made between the separation of the two buildings from Thurlow Street to Haro Street, which will improve connectivity and foot traffic to Robson Street’s businesses. This 13,400-sq-ft public realm, not including the new public plaza on Haro Street, will be activated by the aforementioned retail and restaurant spaces, most notably CaliBurger.

This innovative public realm component is critical for supporting the vitality of the commercial space component of the redevelopment. Despite its extremely close proximity to the core of Robson Street, the existing commercial spaces have had a history of short-lived businesses. 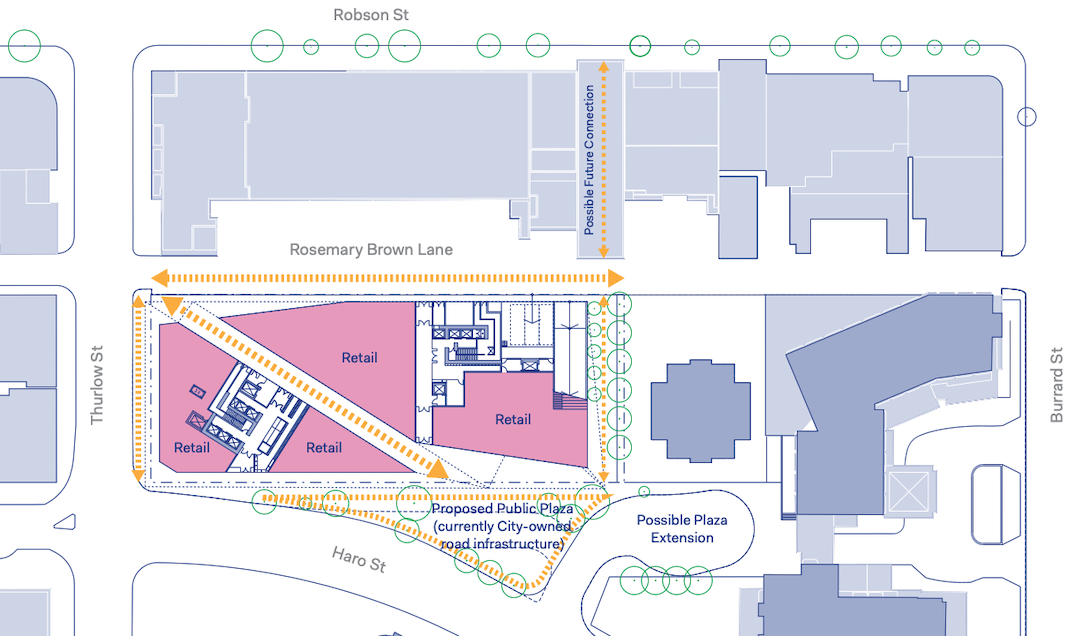 The proposal also includes a two-storey, 6,200-sq-ft childcare facility for up to 49 children, complete with 5,000 sq. ft. of outdoor play space including a covered area for inclement weather. 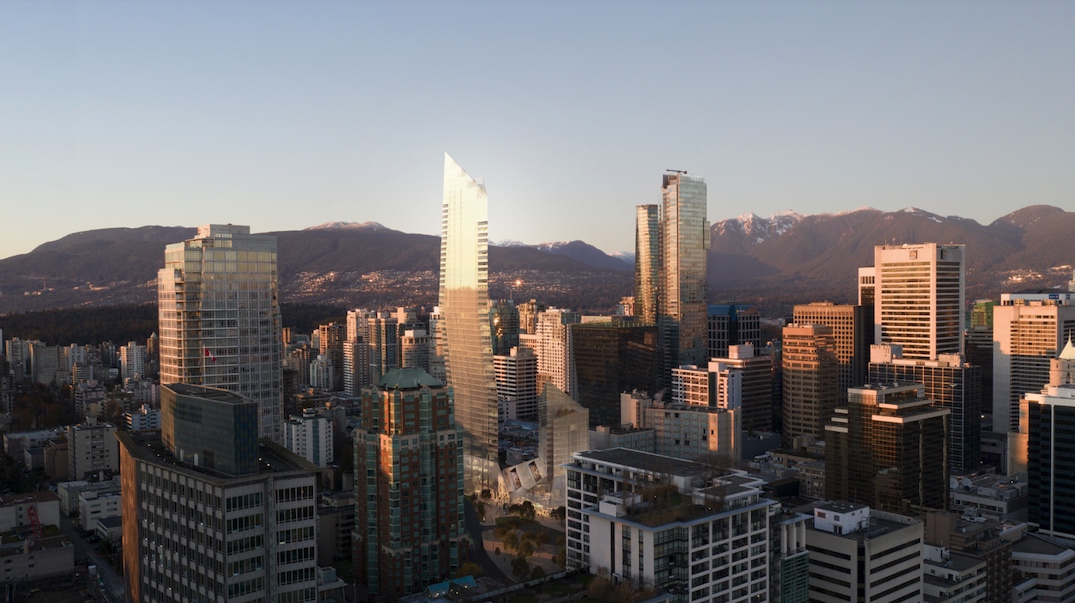 The design by Patkau Architects takes on an irregular, triangular shape to mould itself around a mountain view cone originating from the South False Creek seawall crossing diagonally through the eastern half of the site. Not only is the tall tower triangular to avoid this view cone, but the eastern side of the upper massing shifts inward to avoid an intrusion into the view cone.

There appears to be an equal and opposite reaction to this inward shift, as artistic renderings show a slight protrusion on the other facades. This resulting vertical jagged appearance is topped off by a shard-like pinnacle, a 30-ft appurtenance, which conceals mechanical equipment.

The tower’s pinnacle height is also regulated by another view cone, originating from Queen Elizabeth Park. 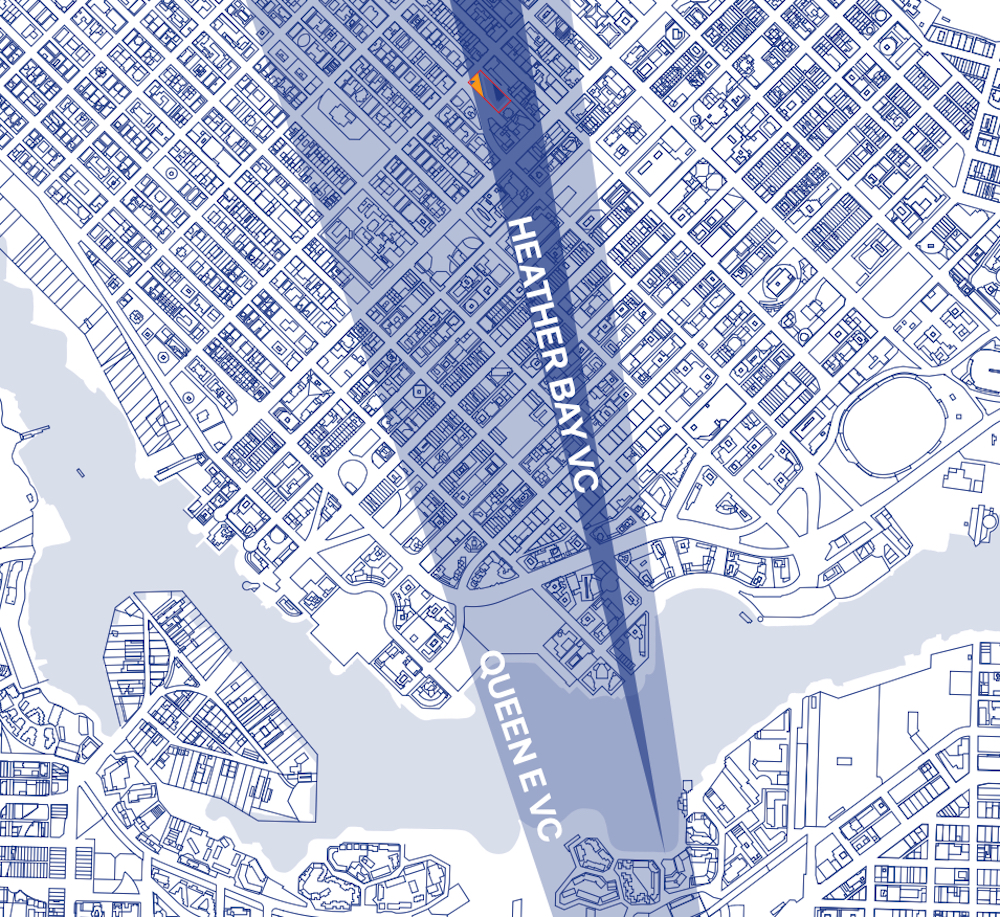 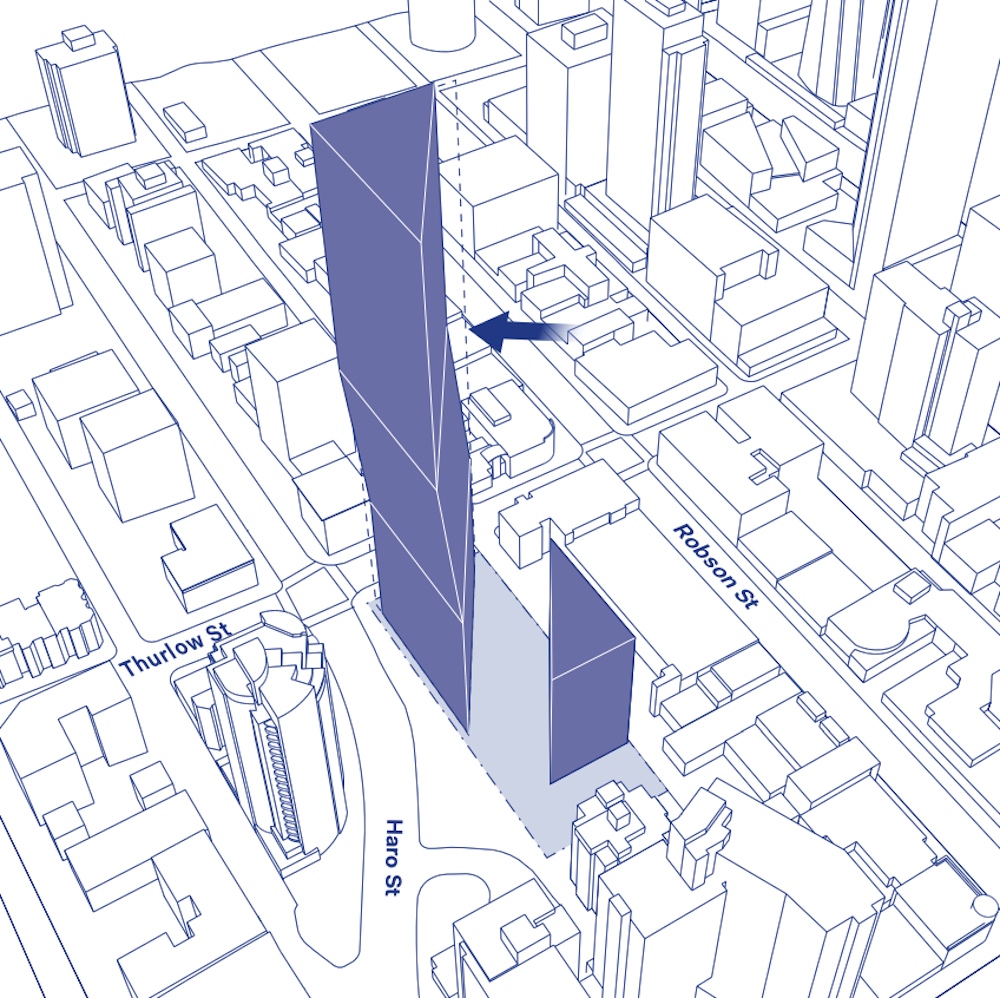 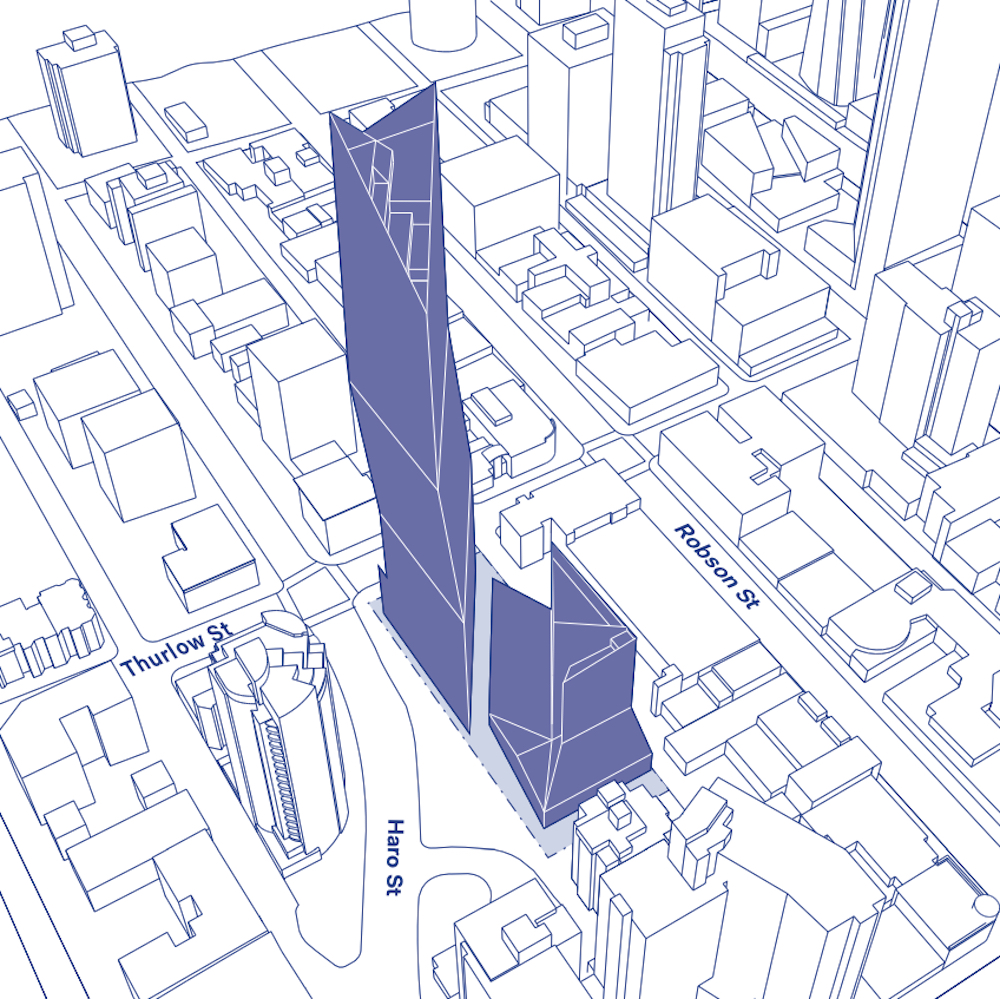 The proposal is currently is in the pre-application stage; the proponents aim to submit a formal rezoning application in January 2021.

However, the 1045 Haro Street proposal is not affected by this policy direction, as it sits just outside of the boundaries for the properties that will be considered for this flexible rental housing inclusion. 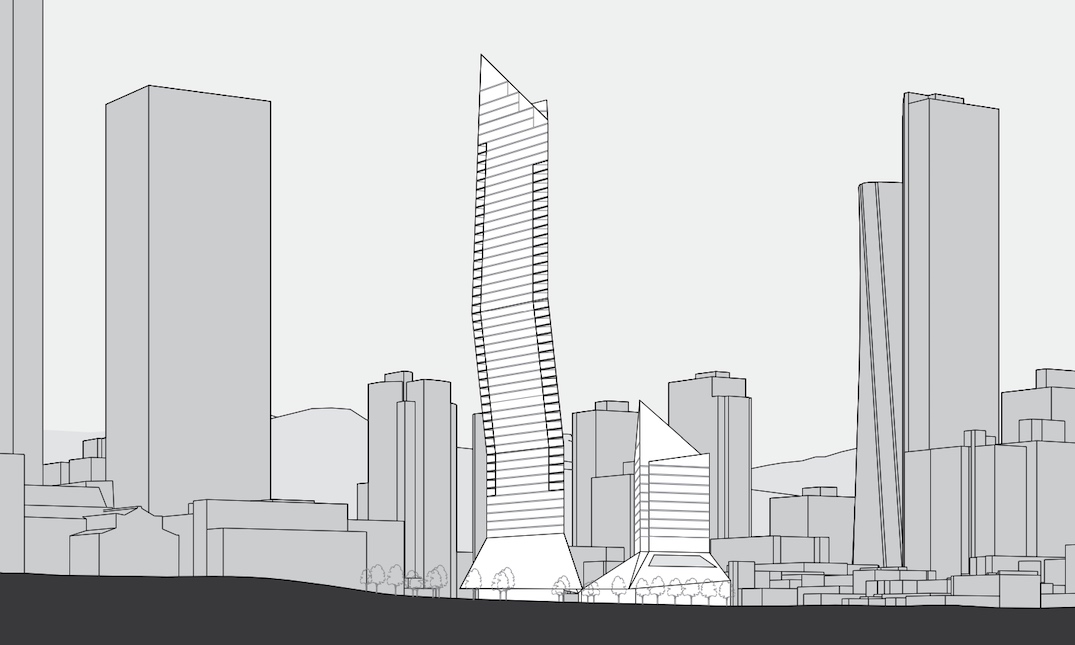