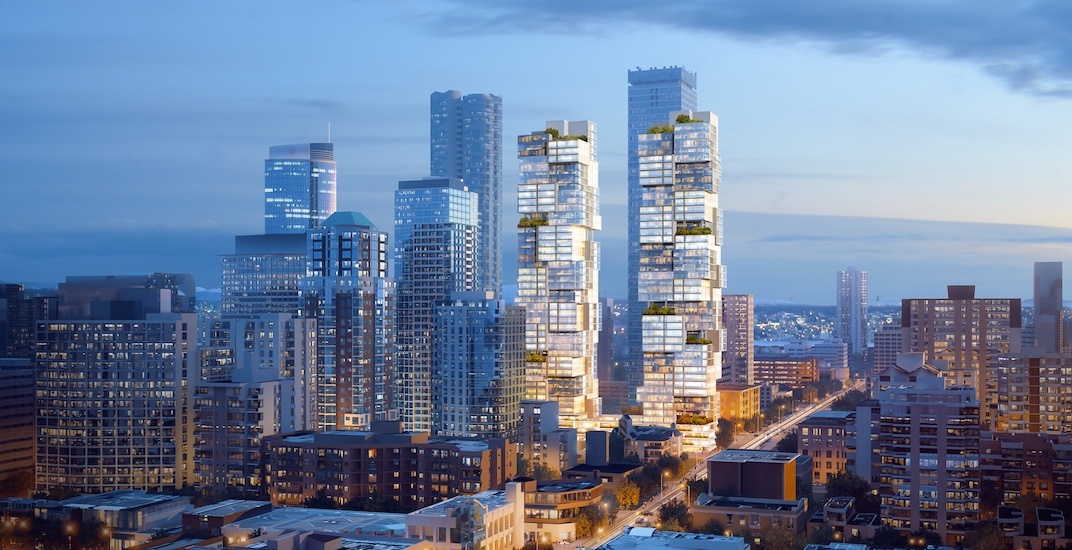 City of Vancouver staff are taking a “glass half full” approach in a bid to move forward stalled major market residential tower redevelopments in downtown Vancouver’s West End that are currently mandated to include a social housing component.

In a report, city staff are recommending city council to permit a temporary policy of considering rezoning applications for 100% secured rental housing in which a minimum of 20% of the residential floor area is secured below-market rental housing.

Various interventions on the housing market by the provincial and municipal governments over the past few years to reduce speculation coupled with the blunt force impact of COVID-19 have softened the condominium market considerably.

The weak market for condominiums means funding and incorporating social housing into the projects is no longer financially viable, and several West End redevelopment proponents have asked the municipal government to permit the switch from strata with inclusionary housing to 100% rental housing.

Financial community amenity contribution (CACs) requirements that would be required for a condominium development project would not apply. Instead, the CACs would be internalized, returning to the project to ensure deeper levels of affordability for the rental homes.

Furthermore, the path of a secured market rental project with at least 20% below-market rents could qualify for a waiver of citywide development cost levies, as long as the projects meet average rental rates and unit size restrictions.

“Based on the current conditions and the progress on implementation of the West End Community Plan detailed above, staff recommend adding a time-limited option of below-market rental housing, confined only to the inclusionary social housing areas of the Burrard Corridor. This will provide a near-term opportunity to deliver affordable housing,” reads the report. 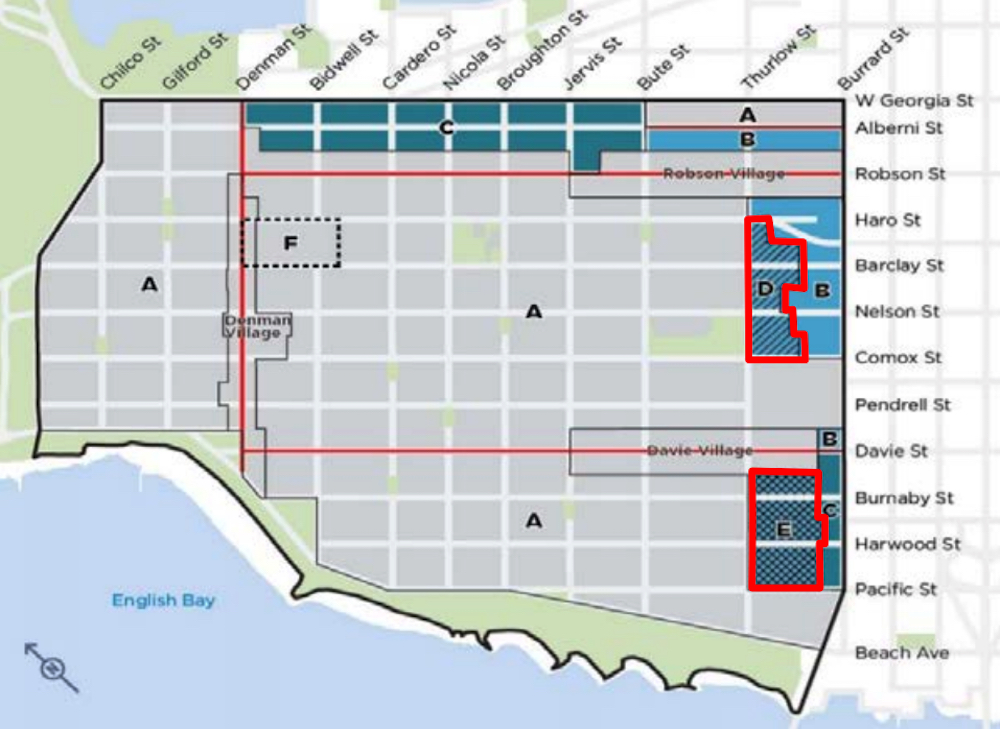 The two zones of the Burrard Corridor within the West End Community Plan area being considered for the temporary flexible rental housing policy. (City of Vancouver)

This new alternative criteria for developers would only apply for properties in two separate zones along the east side of Thurlow Street, guided by the city’s West End Community Plan. Rezoning areas D and E within the Burrard Corridor are located in the general area along Thurlow Street between Pacific Street and Burnaby Street, and between Comox Street and Haro Street.

City staff have specifically noted that five rezoning applications between 2013 and 2018 in these zones — creating a combined total of 866 condominium homes and 342 social housing units — have stalled. These projects are:

Developers Strand and Intracorp are planning to build a 290-ft-tall, 30-storey tower with 82 condominiums and 39 social housing units. The rezoning was approved by city council in July 2018, but it has not yet enacted. The CACs for this project total over $25 million, including a $5.3 million financial contribution to the city and $20.1 million for the in-kind value of the social housing. 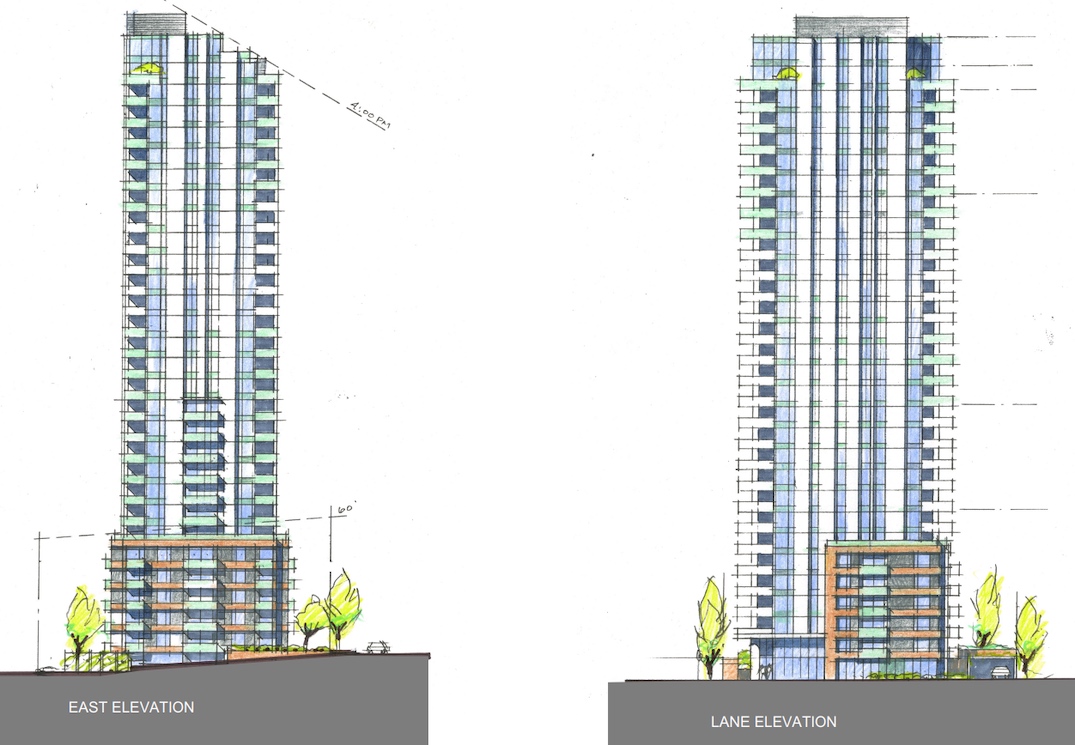 Strand and Intracorp are also behind this project for a 300-ft-tall, 32-storey tower with 82 condominiums and 43 social housing units. This rezoning was also approved by city council in July 2018, but it has not yet enacted. The CACs for this project total $27.9 million, including a $6.6 million financial contribution to the city and $21.3 million for the in-kind value of the social housing. 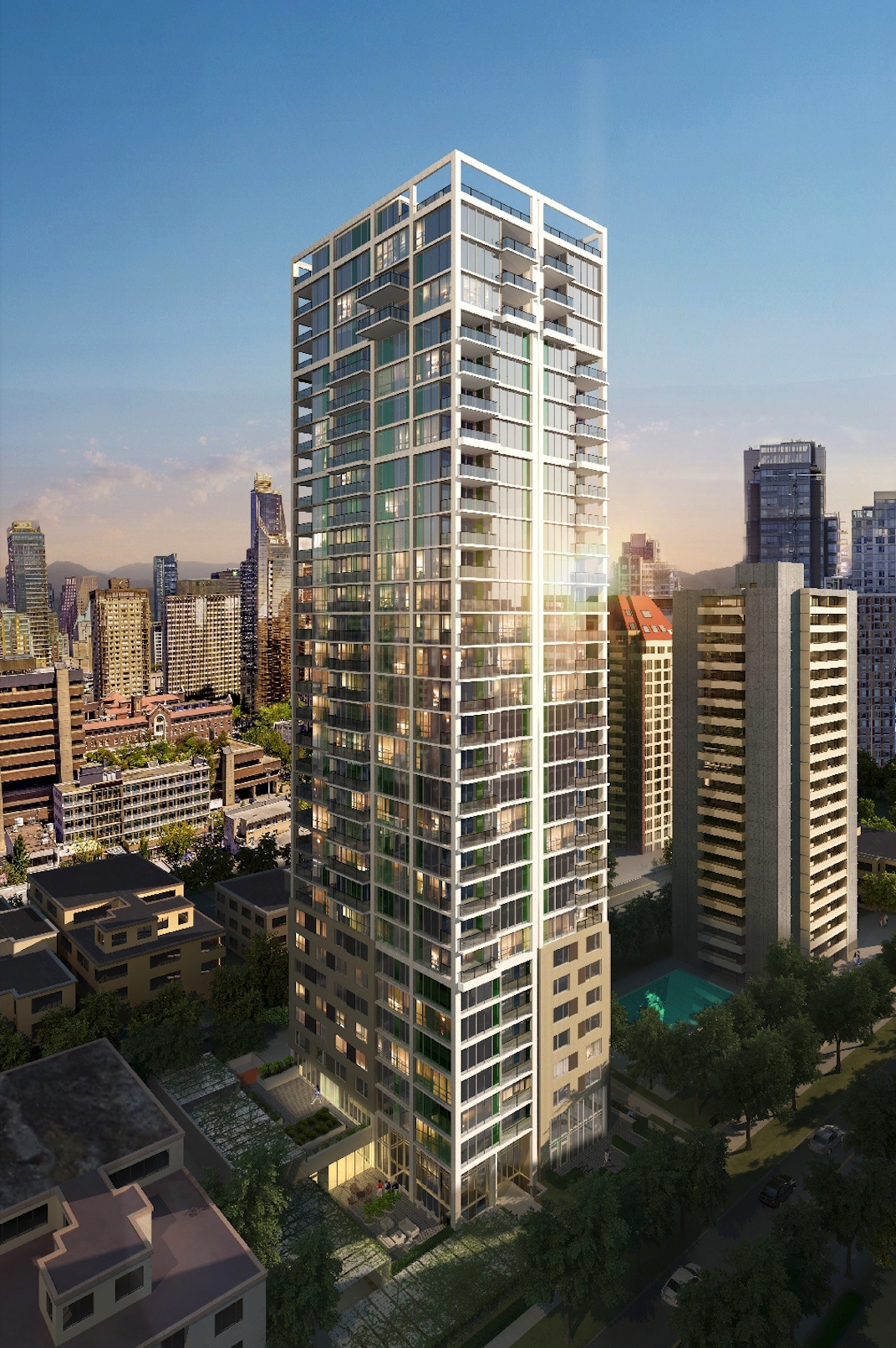 This two-tower redevelopment is being pursued by Bosa Development under two separate rezoning applications — one for each tower, reaching 32- and 33-storeys with a height of 300 ft. Both towers combined will create a total of 202 condominiums and 98 social housing units. The applications were submitted in August 2017, but they have yet to enter public hearing. 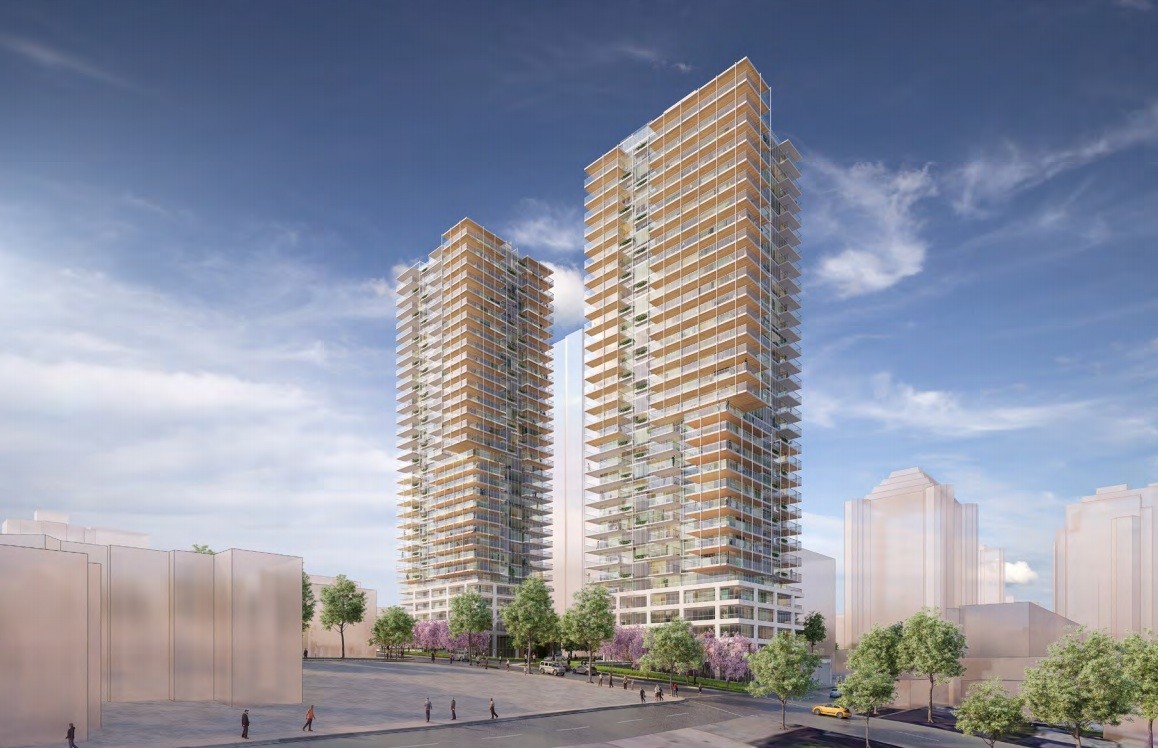 Bosa Development has proposed to build twin towers reaching up to 458 ft with 48 storeys, containing 481 condominiums and 162 social housing units. A 6,000-sq-ft, city-owned childcare facility is included. The application was submitted in February 2018, but it has yet to proceed to public hearing. In May 2018, the developer announced their intention to start construction in 2019. 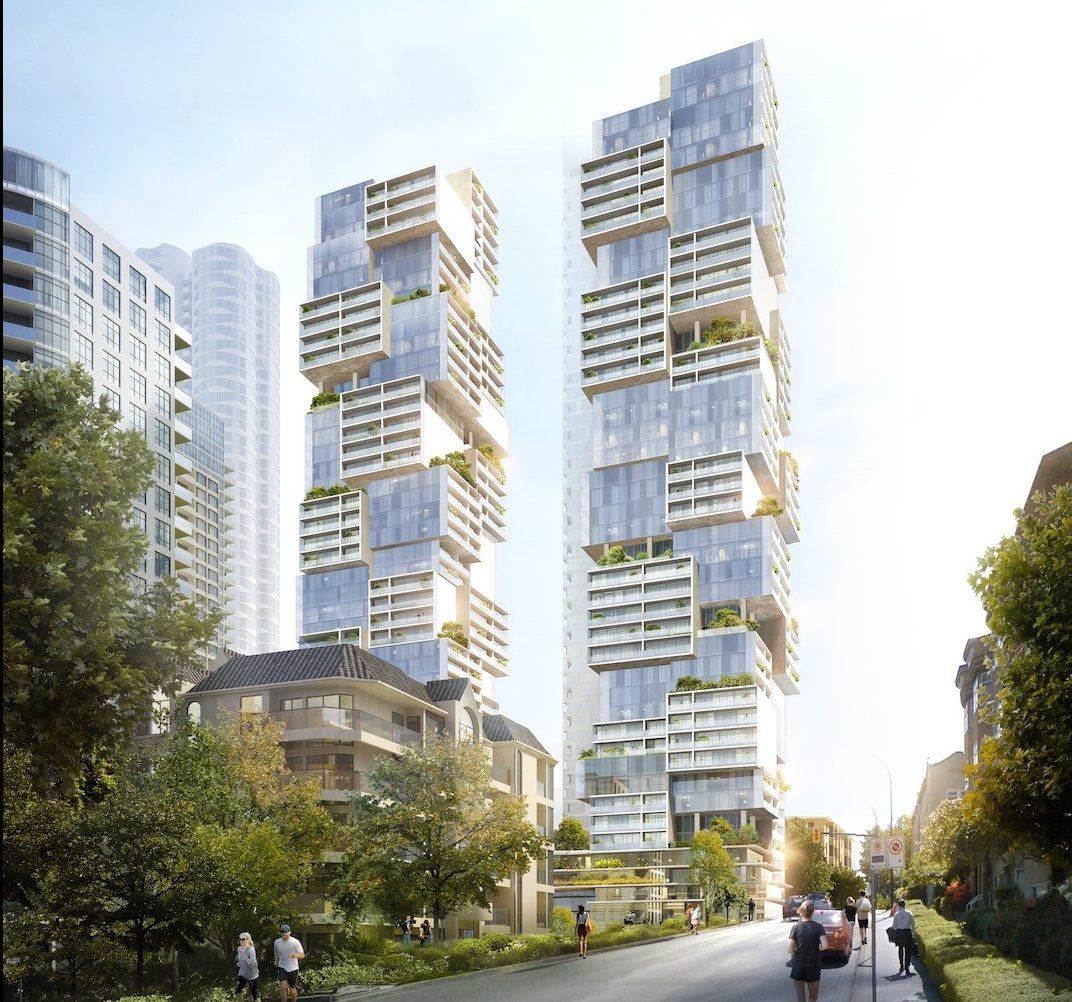 If city council approves the temporary flexible policy, it would only be available for a two-year period for properties within the two zones until the end of 2022.

Providing the criteria that enables these projects to achieve financial viability would also enable timely positive economic impacts from the resulting construction activity.

For market rental housing, the plan established a 30-year target of 1,900 units. To date, 1,544 secured rental homes are under construction or completed.