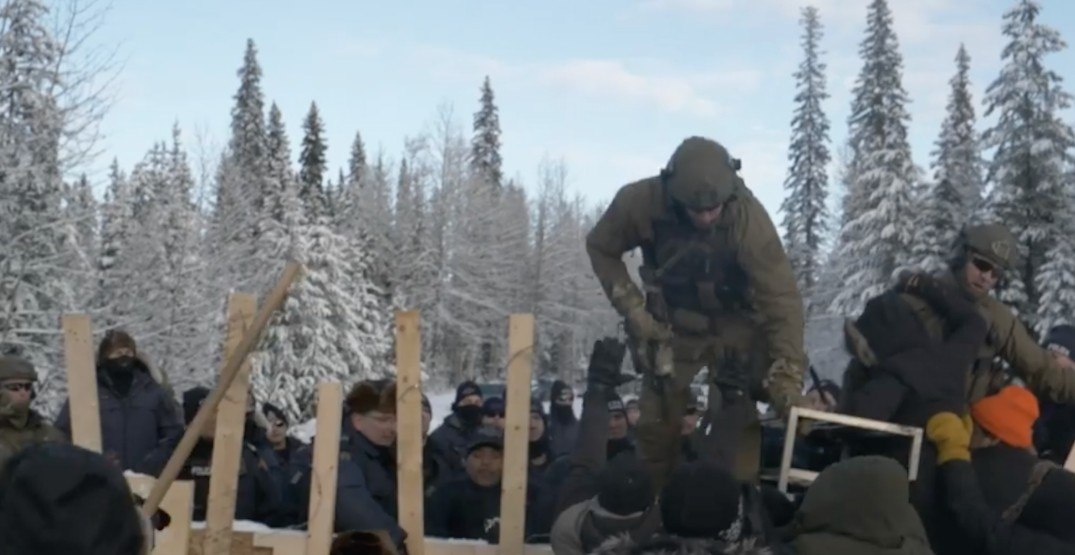 Demonstrations have been planned across Canada and around the world to show support for members of a BC First Nation who were arrested following an RCMP take-down of their anti-pipeline blockade.

On January 7, of the Wet’suwet’en Territory were on site at the blockade set up on the Morice West Forest Service Road located south of Houston, BC. The protesters were opposing a court-ordered injunction that would allow Coastal GasLink workers access to the land.

According to RCMP, a meeting was held with police, Hereditary Chiefs, and GCL, “in hopes this could be resolved without police involvement.”

However, an agreement was not reached and at 3 pm entered the blockade “in order to facilitate open access to the service road.”

The RCMP says that the 14 arrests were made for “various offences including alleged violations of the injunction order.”

“All those arrested continue to be processed at this time,” said police.

There were also reports that RCMP had cut communications in the area to prevent media and public from access information about the protests and that Canadian military personnel were on scene during police enforcement.

“We would like to clarify that both of these allegations are incorrect. The area is
extremely remote and even police had limited access to communication. Police officers, including members of Tactical and Emergency Response Teams, have been deployed as part of our measured and scalable approach to enforcing the court-ordered injunction,” said RCMP.

An international day of solidarity with Wet’suwet’en has been planned for today, and protests are taking place across the country and around the world.

Federal Green Party Leader Elizabeth May announced she would join the rally in Vancouver in an act of “solidarity.” In May 2018, May was arrested at an anti-pipeline protest in Burnaby.

Protests have already been taking place in Canada.

Day of Action in Solidarity with the Wet’suwet’en protectors. #NativeTwitter #idlenomore pic.twitter.com/e0z2TnuwQ2

Photos from this morning’s Wet’suwet’en solidarity rally in Montreal. pic.twitter.com/3quthsA3hK