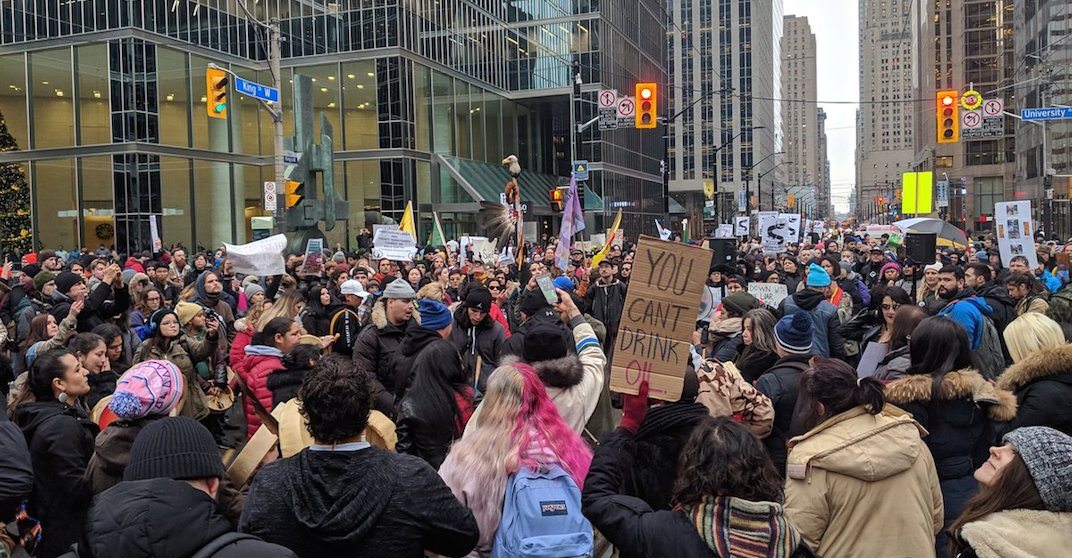 Large rallies are taking place in Toronto in support of the First Nations demonstrators who have blockaded the construction of a pipeline in BC.

On January 7, members of the Wet’suwet’en Territory were on site at the blockade set up on the Morice West Forest Service Road located south of Houston, BC.

The protesters were opposing a court-ordered injunction that would allow Coastal GasLink workers access to the land to build the $6.2-billion pipeline.

Following the arrests, an international day of solidarity with Wet’suwet’en was planned for Tuesday, and protests are taking place across the country and around the world.

Here in Toronto, supporters came together at Nathan Phillips Square to show their support for the Wet’suwet’en people.

Indigenous community & allies have gathered at Nathan Phillips Square to protest the the armed raids by RCMP on #UnistotenCamp Indigenous lands. These are part of coordinated actions across the country in solidarity with #Wetsuweten. No press allowed to cover live yesterday in BC pic.twitter.com/703zlg7nml

Following the rally at Nathan Phillips Square, supporters walked to the busy intersection of King and University to continue their demonstrations.

what King and University looked like around 2pm today #WetsuwetenStrong pic.twitter.com/gOza1I4KVk