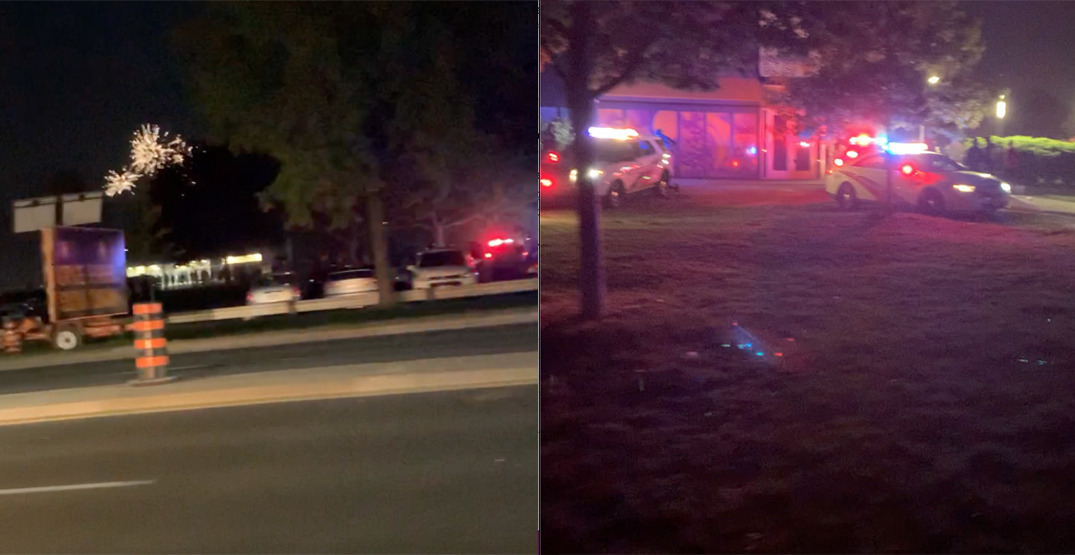 Crowds got rowdy at Toronto’s Woodbine Beach over the long weekend.

Many people went to the east end beach to enjoy the warm weather, but at night people set garbage on fire and lit fireworks, according to police.

Daily Hive saw multiple police cars in the area and people shooting Roman candles at each other.

One person had to be taken to hospital after they were hit by a firework, and a second was hit in the leg. Another person was arrested, police said.

Police say one individual was hit with a firework near Ashbridge’s Bay on Monday afternoon. They were taken to a hospital for medical attention.

Officers responded to reports of fireworks being launched and garbage lit on fire Sunday evening. One person was arrested and charges were laid under the Highway Traffic Act.

“Over the weekend officers responded to extremely large crowds in the Woodbine Beach area. Due to the hostility and size of the crowds, officers had to use their discretion at the time and take into account the safety of themselves, those in attendance and the wider public,” Toronto Police spokesperson Connie Osborne said.

Victoria Day is one of the few days a year that lighting fireworks is legal, but people are not supposed to set them off in parks or on streets, according to the City of Toronto’s website.

Why are Torontonians so lazy and disgusting? Just one of many scenes this morning at Woodbine Beach. pic.twitter.com/iO2LKd6Fum

The City has said it’s increasing garbage collection from popular parks and beaches because more people are using them during the pandemic.