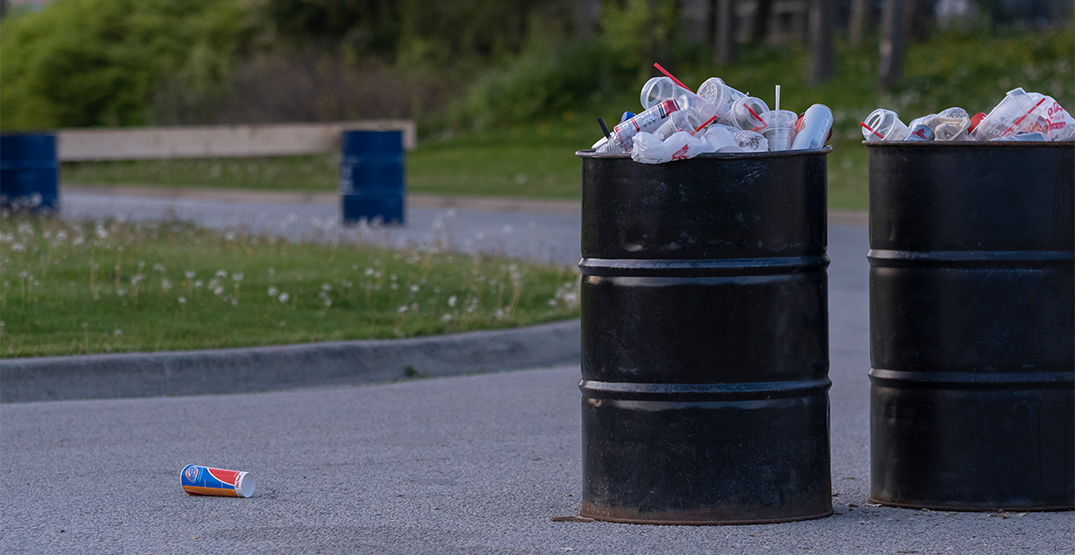 People who litter at Toronto’s parks and beaches could be fined up to $500 if they’re caught.

More people have been using parks for outdoor hangouts during the pandemic, and their leftover garbage is one unfortunate side effect, according to the City. The grass at Trinity Bellwoods was covered in leftover trash on Monday from people who gathered there to enjoy the sunshine with friends.

There are currently 35 garbage bins and 35 recycling bins at Trinity Bellwoods, and the City is adding more this week after the crush of people on the weekend, a spokesperson told Daily Hive via email.

“If a bin is full, people should look for another bin or ‘pack out’ and bring their waste home for proper disposal,” the spokesperson said.

They confirmed that littering comes with a fine of $500.

But with so many people visiting a park at once, it can be difficult for bylaw officers to determine which specific individuals left their garbage.

The public is asked to report any litter hotspots to 311.

According to the City, it costs $27 million in a typical year to clean up people’s litter.

Do your part to keep Toronto clean and beautiful by putting your waste in the public bins provided or taking it home. Litter costs the City more than $27.5 million/year and comes with a fine of up to $500. Report litter hot spots to @311Toronto More: https://t.co/1b1ndSQusj pic.twitter.com/thbkHTok2Q

Woodbine Beach is another popular area the City is focusing on this summer by stepping up garbage pickup and bin collection during peak periods.

“We can all enjoy the beach safely,” City Councillor Brad Bradford said back in April. “Now more than ever, we should be making the most of this beautiful resource for our physical and mental health.”

The top offending items that end up on the ground include gum, cigarette butts, personal protective equipment, and paper towels and napkins. The refuse can cause environmental damage because it doesn’t break down easily, and can harm animals if eaten.