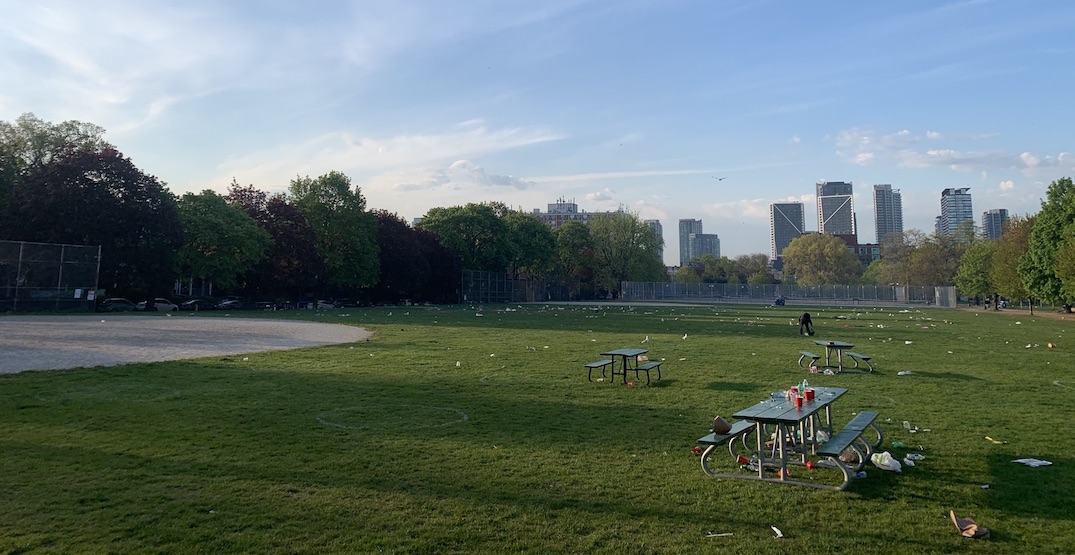 Trinity Bellwoods was left trashed this weekend after the warm weather brought out hundreds of Torontonians looking to enjoy the sunshine (and a couple of drinks).

Friends of Trinity Bellwoods, a volunteer-run group that works to improve and maintain the park space, shared photos of the aftermath of what the park looked like on Sunday morning following Saturday’s large crowds.

“It is the garbage that didn’t even get close to the bins that gets to me the most,” Friends of Trinity Bellwoods posted on Twitter. “Now everyone who uses the park this morning gets to enjoy a garbage dump.”

It is the garbage that didn’t even get close to the bins that gets to me the most….now everyone who uses the park this morning gets to enjoy a garbage dump. Anyone have any ideas on how to get people to pick up after themselves? #moreparksTO @joe_cressy @JohnTory pic.twitter.com/qTeCntoSOp

Friends of Trinity Bellwoods tagged Mayor John Tory and City Councillor Joe Cressy in their photos to alert them to the issue.

According to a City spokesperson, “after a large anti-mask protest made its way to Trinity Bellwoods Park on Saturday afternoon and the nice weather resulted in greater numbers of visitors to the park, a large amount of litter was left on the ground on Saturday night.”

Cressy said his office received multiple complaints about the large volume of garbage left in the park in connection with the anti-lockdown event.

“This is unacceptable,” Cressy said in a statement to Daily Hive. “It is everyone’s responsibility to clean up after themselves and to ensure that our parks and green spaces can be enjoyed by all. City staff have confirmed that they adjusted their work plans to send additional resources to clean up the park yesterday morning and are also actively working to provide additional bins for refuse going forward.”

Toronto resident Joe Clement shared even more pictures of the trash, plus a video that revealed the extent to which all the garbage was strewn across the main field at Trinity Bellwoods.

The reactions to Clement’s photos and videos ranged from people saying the state of the park was saddening to others calling it “embarrassing” and “disgusting.”

“No words but I’m not surprised,” one commenter wrote. “The entitlement in this city is disgusting.”

On Friday, the City repainted the physical distancing circles on the grass at Trinity Bellwoods. The circles, which can accommodate two to three people each, are meant to encourage park-goers to keep six feet of distance between them.

Under the province’s current Stay-at-Home order, outdoor gatherings are limited to members of the same household. Many of the gatherings in Trinity Bellwoods on Saturday, however, were large groups of young people.

According to Clement, nearby residents on Gore Vale Avenue, which borders the east side of the park, started taking the cleanup into their own hands, collecting bag-fulls of the garbage.

“The City is asking the public to do their part to help keep Toronto clean and safe by properly disposing items in available street and park bins and not leaving items on the ground,” Gonsalves said. “If a bin is full, people should look for another bin or bring their waste home for proper disposal.”

Cressy agreed that park-goers need to take on the responsibility of cleaning up after themselves, saying, “It’s also up to all of us to act responsibly and protect our shared greenspaces, with are especially important right now when people need to clean and well-maintained outdoor areas to get outside and enjoy the weather while staying safe.”

The City will be adding more waste bins at Trinity Bellwoods this week.