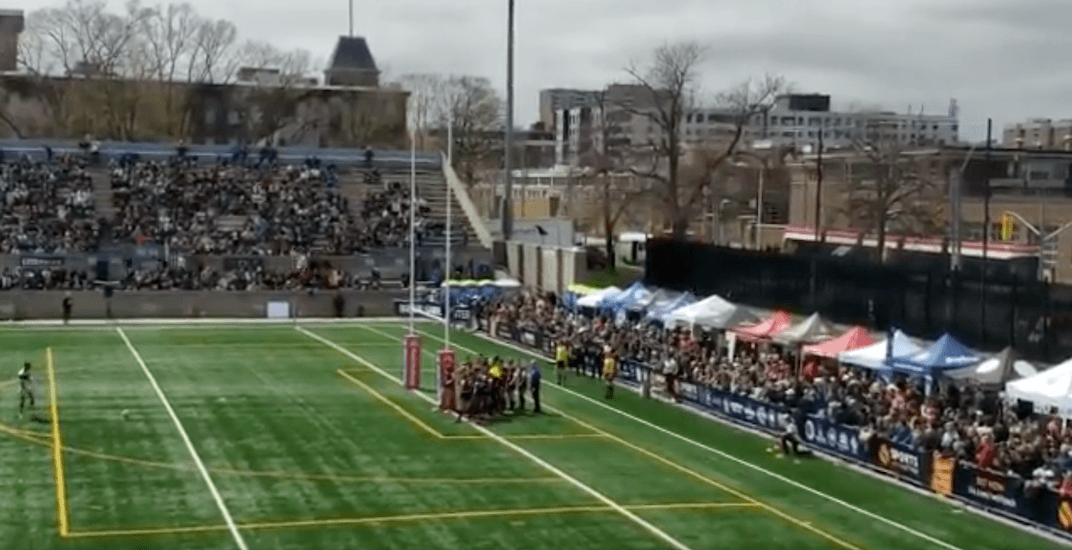 It’s all about the simple things in life.

For example, we take you to the Toronto Wolfpack pro rugby match this past weekend.

O’Brien lined up a kick in the 67th minute of Toronto’s 36-16 win over the Bradford Bulls, just as a streetcar stopped outside the stadium on King Street. The ball sailed through the uprights and out of the 9,600-seat stadium, hitting the streetcar – much to the delight of fans.

The only stadium in the world where a Rugby kicker can hit a streetcar (tram)! #TorontoWolfpack #RugbyLeague #TTC pic.twitter.com/xyxkHZSluP

Been waiting all game for @TOwolfpack to hit the King Streetcar. Not only did they hit it, the ball got stuck in top and is westbound #DefendTheDen

“I didn’t know it was there, to be honest,” said the 27-year-old Englishman. “They cheered for the goal, then I think the crowd erupted… I’ll keep trying to hit them streetcars for you.”

WE HIT A STREETCAR! I repeat, we hit a streetcar! #DefendTheDen @TOwolfpack

Hit the streetcar by @gazobrien22 at the @TOwolfpack game and the fans go wild!

@TOwolfpack There should be an extra point for a conversion that hits a streetcar. @gazobrien22 #ttc

Gaz O’Brien just hit a streetcar with the conversion! Both sets of fans enjoyed that one! @TOwolfpack 32-12 @OfficialBullsRL