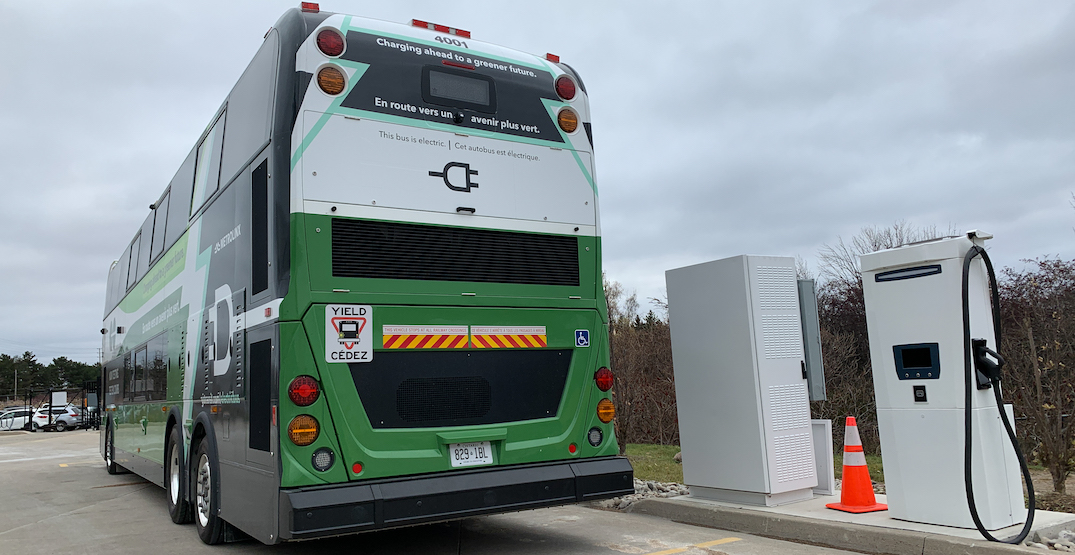 GO Transit riders will soon be able to hop aboard a new pair of fully-electric buses starting next year.

Metrolinx announced on Monday that they are beginning to test out two zero-emission, battery-powered buses ahead of their incorporation into existing GO bus routes in 2022. The two double-decker buses have been retrofitted with nine batteries, giving them a total energy of 648 kilowatt-hours.

Although the new buses look similar to existing GO buses, they’ll have a few noticeable changes. Firstly, they’ll be much quieter thanks to the lack of a diesel engine. Instead, they’ll have a constant white noise that mimics the engine sound but at a much lower level. Riders will also directly benefit from the onboard batteries, with new USB ports at every seat so they can power up during their rides.

The new buses will have fewer lower-level seats to make room for the batteries, but this change has allowed Metrolinx to reconfigure the luggage area.

“Customers can now load and offload their luggage toward the back of the bus from both the inside and outside, unlike the other buses in the GO fleet,” reads a Metrolinx blog post.

A new audio-visual alert system has also been installed and will play a sound and message to alert pedestrians and cyclists when the bus is turning or reversing.

During testing — taking place this winter — riders won’t be able to board the electric GO buses, so Metrolinx will be using ballasts to mimic the weight of a full bus.

Next year, the two buses will then be added to select GO bus routes west of Toronto, during which time Metrolinx will gather further data on their performance in different settings and weather conditions.