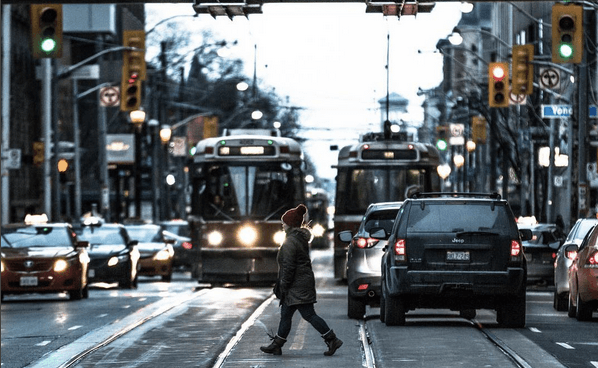 After a rise in pedestrian fatalities in 2016, the City of Toronto is taking action to reduce the number of accidents this year.

In seeking ways to eliminate fatalities, a massive Vision Zero Road Safety Plan was introduced by the City.

Mayor John Tory and Councillor Jaye Robinson, Chair of the Public Works and Infrastructure Committee, outlined 45 new measures that will be introduced this year as part of the City’s $54 million in funding plan.

The plan targets the elimination of fatalities and reducing serious injuries with an emphasis on pedestrians, school children, older adults, cyclists, aggressive and distracted driving, and motorcyclists.

This year, we’re rolling out #VisionZeroTO’s Road Safety Plan on a massive scale to make our streets safer for all who use them.

“The number of pedestrians and cyclists injured and killed by vehicles in our city last year is both alarming and unacceptable. We must do more to prevent these deaths and protect our residents across the city,” said Mayor Tory in a press release. “I am committed to making sure all those who use our roads – pedestrians, cyclists and drivers – can get where they need to go as efficiently and safely as possible.”

Among the initiatives that the City is introducing immediately include:

The City has also created the VisionZeroTO website, providing information about the plan, along with a mapping tool, and future planned work.

The Vision Zero Plan was approved by Toronto City Council in 2016, and contains a series of strategies aimed at reducing deaths and serious injuries in the city, as well as improving safety for all road users.