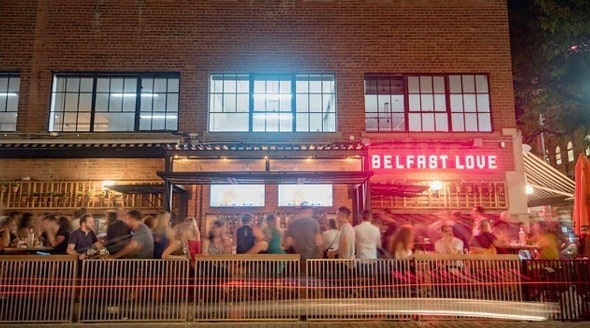 Do you remember where you were when you watched Sidney Crosby score the game-winning goal for Canada in the Vancouver Olympics?

National sporting events – especially hockey – have a tendency to bring out the proudest Canadian in all of us.

And with the World Cup of Hockey (WCOH) starting to heat up, we wanted to share a roundup of the best pubs to catch all of the big games so you can be at the right place at the right time to cheer on Team Canada (or perhaps another native country) during this showcase of the world’s greatest players.

So sit back, crack a cold one and get ready for some hockey action…

The Dog and Bear

If you’re looking to catch a game and unwind with a pint, look no further than the Dog and Bear, the liveliest sports bar on Queen West. Here you can relax in one of the spacious crushed velvet booths, watch every moment of the WCOH on one of the many flat screens and dine on traditional English pub food. After one visit you’ll understand why sports fans consider this one of the best sports bars in Toronto.

This sports bar is a great spot for devoted hockey fans, tourists, and Torontonians to gather for pre or post game drinks and eats – don’t worry, we won’t judge if it’s both. If there’s a big game on, Gretzky’s always has an electrifying atmosphere and everyone is charged up, including the staff.

When you can’t decide whether you want to go for a nice sit-down dinner or relax and watch the game, The Dizzy makes the decision process easy for you. The Dizzy features a menu that’s inspired by rustic bistro fare and plenty of high definition televisions so you can watch every moment of the big game. Located in the heart of Roncesvalles Village, this neighbourhood pub offers sports fans a relaxed and fun environment and brings pub food to a whole new level.

Live Music at The Ballroom on Thursdays!

Toronto is home to many fantastic sports bars and in order to stay ahead of the competition, bars have begun to offer guests more than just televised sports. Cue The Ballroom. Located in Toronto’s bustling entertainment district, The Ballroom comes equipped with 60 LED TVs that are perpetually tuned into sports – so you can see Sid the Kid dangle from every angle, as well as a sports bar, entertainment centre, and a ten pin bowling alley.

This place has the best calamari 😍 #kilgoursbarmeetsgrill

Kilgour’s is a truly authentic hockey bar that is decked out with Montreal Canadiens memorabilia. But don’t worry if you’re not a die hard fan of the Habs, as all hockey fans are welcome to come and cheer on their favourite team during the WCOH. Enjoy the laid back atmosphere as you sip on crisp pints and dine on traditional pub fare. We highly recommend trying the poutine.

Sprawling at 25,000 square feet, Real Sports is in a league of its own when it comes to hockey action. Located in the heart of Toronto’s sports district, you’ll always feel like you’re sitting front row at every game – the 199 HD TVs, one being a 39-foot HD Big Screen, definitely help. Here you’ll proudly sing ‘O’ Canada’, bond with your buddies over beers, high-five a few strangers, and possibly shed a few tears if your team doesn’t win. Regardless of your evening outcome, you’ll always have an extremely memorable night.

Since serving its first pint in 1989, a number of items have changed on the menu, but there are a few things that have always remained the same – ensuring that sports fans always have a casual space to unwind at that has no shortage of hockey, great beer, and wonderful food. Just a stone’s throw from the Air Canada Centre, the Loose Moose has always been the perfect spot to enjoy a pint before the big game or hang out and watch it if you couldn’t snag a ticket.

Be prepared to engage in a bit of competitive banter with rival sports fans at this local watering hole, as St.Louis attracts hundreds of sports fans from all over for the city every hockey game. This is definitely the place to be if you’re looking to to kick back, enjoy some wings and an ice cold beer while you cheer on your favourite team.

Also known as Toronto’s oldest bar, the Wheat Sheaf Tavern is a popular watering hole for hockey fans where they can kick back and relax while enjoying some great food and drinks as they take in the big game. Make sure to arrive early, this pub is known for filling up quick.

This King West newcomer has quickly become the go-to spot of the summer. Belfast Love is the modern day take on a ‘proper’ pub and offers more than enough HD TVS, bar stools, and suds on draught. If you’re looking for a more casual atmosphere where you can play some pool and catch up with friends while you watch the game, this is definitely the place to be.

If you’re looking for somewhere that offers more than just a big TV, go to Amsterdam Brewery. Here you’ll find plenty of spots to watch the WCOH, stunning lake views, and an impressive food menu. Nothing washes down a win or a loss better than one of their delicious beer flights.

When in doubt, you can go right to the action and watch your favourite team play at the World Cup of Hockey Fan Village. Here you’ll find a massive beer garden, plenty of TV screens, the Pepsi main stage, human bubble hockey, a Virtual Arena presented by Soctiabank, which will give hockey fans the chance to step on the ice for an ultimate VR viewing experience, as well as the Molson Canadian Hockey House which gives hockey fans the best seat in the house during all of the live viewings. Think of this as the ultimate viewing experience.