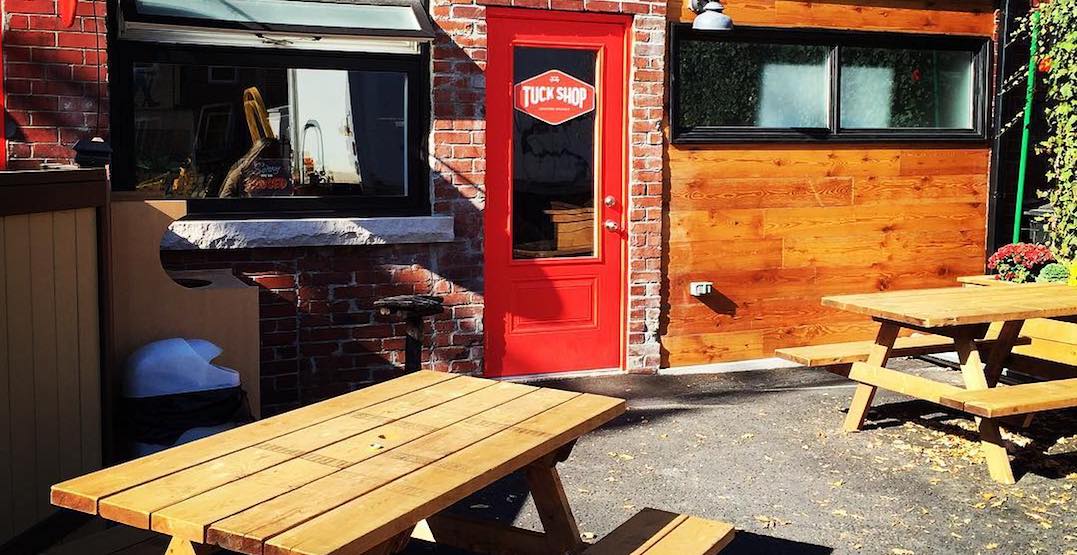 TuckShop Kitchen is rallying for help from the Junction Triangle community in order to hold onto their front patio space.

“It’s been a struggle with the city since Fall 2018,” the shop’s co-owner Robb Eng told Daily Hive.

“After receiving a letter from the city, one of their licensing officers came into our shop during the lunch rush, showed his badge and told us we were in violation of city bylaws and subject to major fines. It’s been a bit of a saga ever since.”

The inside of the eatery is tiny with no seating available, and out front sit a couple of picnic tables.

“We originally created the space as a public area for the community to use, given we don’t offer table service or alcohol. It was a couple of picnic tables and planter boxes,” Eng said.

“Many members from the community also would use the area to sit, whether they were customers or not of ours.”

According to Eng, the city described the space outside TuckShop as a “Boulevard Cafe” patio… one that was being run without a proper city permit, or payment of yearly permit fees.

“We were forced to tear down the patio or face large fines,” explained Eng. “We respected their decision and worked to complete all the necessary documents and paid the $286.84 admin fee to submit an application on April 11.”

Eng then said that in June, the shop received a response letter from the city that said that due to their use of wooden planter boxes instead of metal railings or posts to separate their patio from the surrounding space, their application was rejected.

Since, they have been working with their ward’s city councillor, Ana Bailão, and the supervisor from the municipal licensing and standard office, in order to learn more about their options moving forward.

This is where the community comes in.

“Tuck Shop Kitchen received a notice from the City in the summer of 2018 regarding their operation of a patio without a licence. The patio was removed and my office have been assisting the Tuck Shop Kitchen in terms of what is required to seek approval for their patio,” Bailão told Daily Hive.

“As their patio was constructed of wood their application would be refused under current rules, however this regulation is set to change in September of this year following the Sidewalk Café & Marketing Display Review and wood will then be permitted,” she explained.

“As part of the process, a poll has been sent out to the adjacent community and we have advised the Tuck Shop Kitchen owners on this process as well. My staff and I will continue to assist as the process proceeds.”

The city’s letter and ballot will be sent to residents within a 120 metre radius from the patio. They will require a 50% response rate by mail-back from community members, and 50% of those responses must be a positive ballot.

“We’ve been so fortunate to have a supportive community of our local sandwich shop, and so we’ve taken to social media to help give a heads up of this letter to look for it,” Eng said. 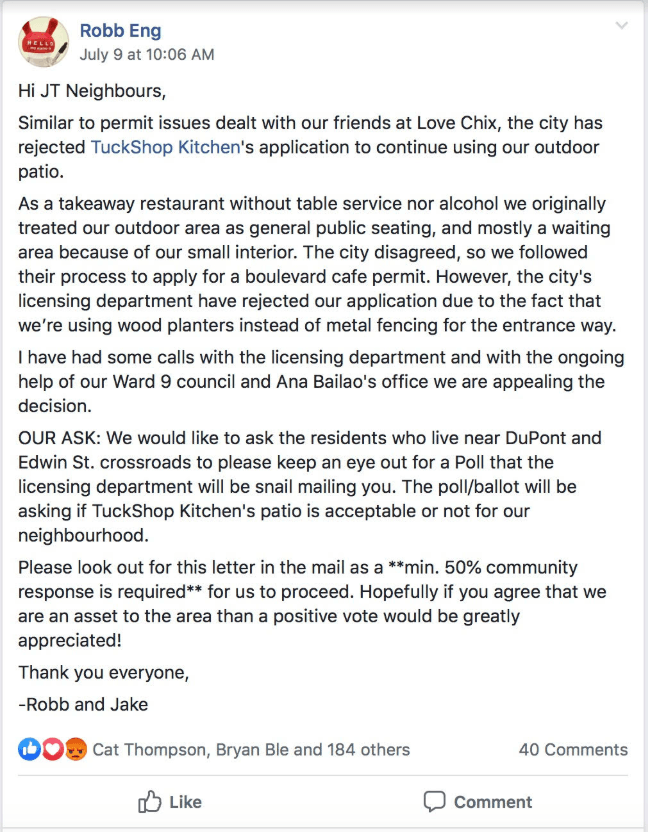 So if TuckShop’s patio is one that you tend to enjoy and you live nearby, keep an eye out for a letter from the city.

According to Eng, it’s expected to arrive in the next week.

Daily Hive has contacted City Councillor Ana Bailão for comment and will update this story accordingly.