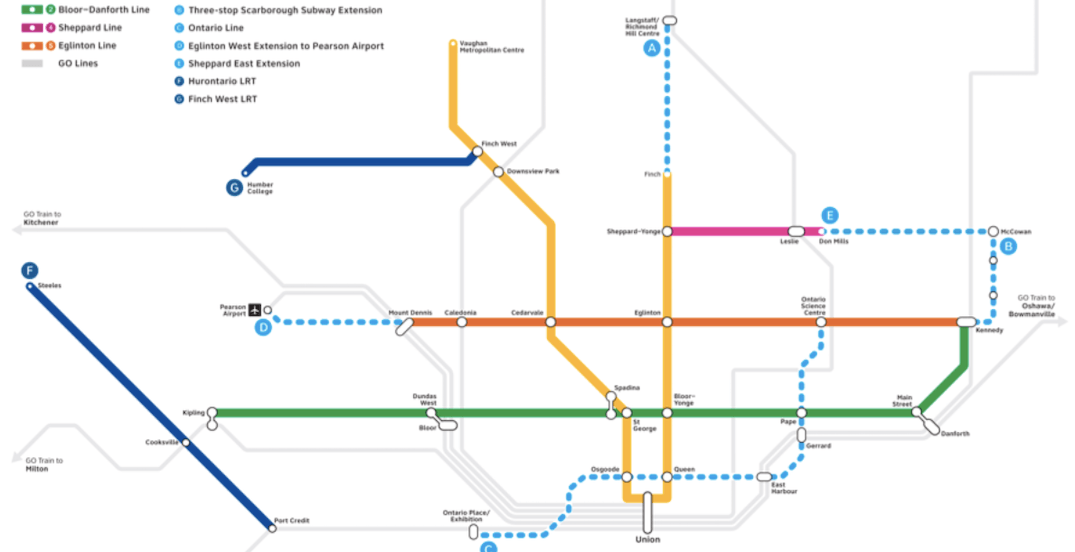 This is the most money ever invested to get shovels in the ground and get new subways built, according to a release from the province.

Of that, $10.9 billion will go to a new ‘Ontario Line’, which will link Ontario Place to the Ontario Science Centre by 2027. The Scarborough Subway Extension will cost $5.5 billion and is expected to be delivered before 2030, according to the Ford government.

But TTCriders are calling out Ford for starting from scratch.

“Sending projects back to the drawing board will cost us more and delay new lines,” said TTCriders spokesperson Shelagh Pizey-Allen. “We can’t afford to go backwards. Our transit plans need funding, not political meddling.”

The province’s plan included the Eglinton Crosstown West Extension, which will cost $4.7 billion and will be delivered before 2031, but did not include the Eglinton East LRT.

TTCriders said that Ford’s plan removes the East LRT, which was approved to be built in a single phase by Toronto’s Executive Committee yesterday, but lacks funding.

“Premier Ford is leaving eastern Scarborough communities off the map and wants to tear up our city’s transit plans,” said Brenda Thompson, of Scarborough Transit Action. “The Eglinton East LRT is ready to build this year, but is unfunded. We are outraged that we are being kept waiting for a rapid public transit network.”

The provincial plan also renames the Relief Line to Ontario Line, and it would connect Ontario Place to the Science Centre.

“The Yonge Line is already dangerously overcrowded. We can’t afford more delays and to use untested technology for the Relief Line,” said TTCriders member Herman Rosenfeld. “A “free-standing” Relief Line sounds an awful lot like a privatized, Union Pearson Express-style line that most people won’t be able to afford.”

The President of Amalgamated Transit Union Canada said that Ford can build all the stations he wants “but without dedicated operational funding for transit, the GTA community will be poorly served.”

“Every politician wants to build big shiny projects but none, including Premier Ford, will commit to funding the operations,” said ATU Canada President John Di Nino. “He is laying the ground-work for a ribbon cutting junket for big shiny stations but without putting money into the operations, riders will have to pay more and the trains will never run on time.”

He also said that this is really about “big fat construction tenders and photo-ops,” and nothing about reliability and affordability for the riders.

ATU Canada has also demanded, and excepts, that no jobs will be cut from the TTC.

“The subway upload will be a gong show like every other sector Ford has interfered in,” said Di Nino. “We know quite well that the subway finances the operations of bus and streetcar routes as an integrated system.”

TTCriders have organized a Town Hall to save the Eglinton East LRT for Wednesday, April 10th at the Mid Scarborough Hub from 6pm-8:30 pm.

Toronto Mayor John Tory has yet to respond to this morning’s announcement.