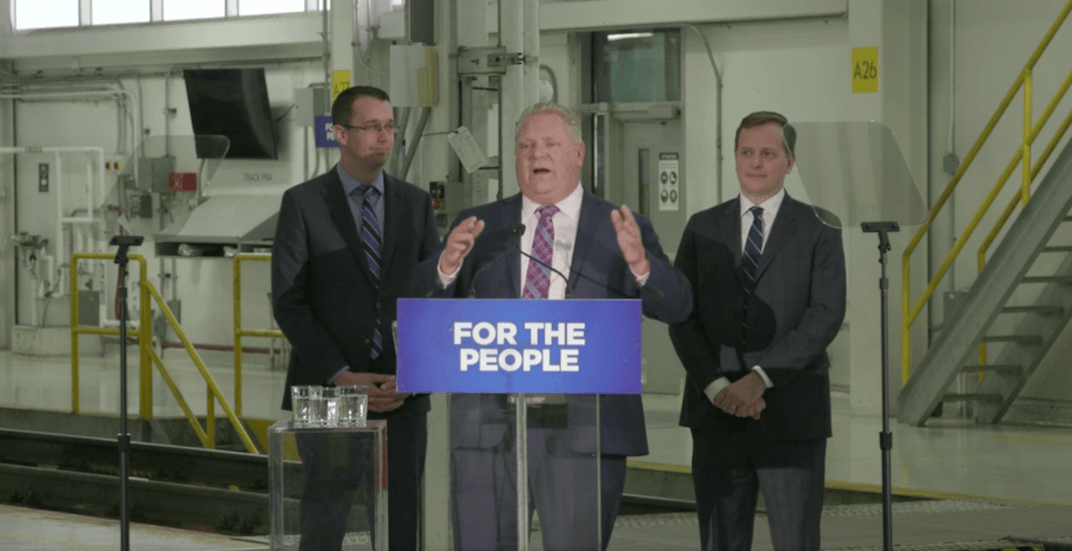 This is the most money ever invested to get shovels in the ground and get new subways built, according to a release from the province.

Of that, $10.9 billion will go to a new ‘Ontario Line’, which will link Ontario Place to the Ontario Science Centre by 2027.

It’s a historic day in Ontario! Proud to stand with @fordnation and @MonteMcNaughton to announce a transit plan for the 21st century, including the new Ontario Line! We are improving transit to get you to work, to home, and to family and friends sooner. #onpoli pic.twitter.com/HDizYtpBwF

“Our government is investing in transportation to bring relief and new opportunities to transit users and commuters,” said Ford Wednesday morning at a press conference in Etobicoke.

“We announced the new Ontario Line to deal with the dangerous congestion on Line 1, the Yonge North Subway Extension that will connect the subway to one of the region’s largest employment centres, the three-stop Scarborough Subway Extension to better serve communities, and the Eglinton Crosstown West Extension.”

“A large portion of which will be built underground to keep people and goods moving on our roadways. This is our plan, our priority,” added Ford.

The funding breakdown is as follows, according to the province:

“The TTC is a vital service that supports not just Torontonians but the people of Ontario,” said Minister of Transportation, Jeff Yurek.

“Our government is continuing to work in good faith with the city under the Terms of Reference to make sure that we can build better transit faster.”

Ford previously said the plan will be “the largest infrastructure project in transit in North America.”

The announcement comes one day before his government’s first budget.