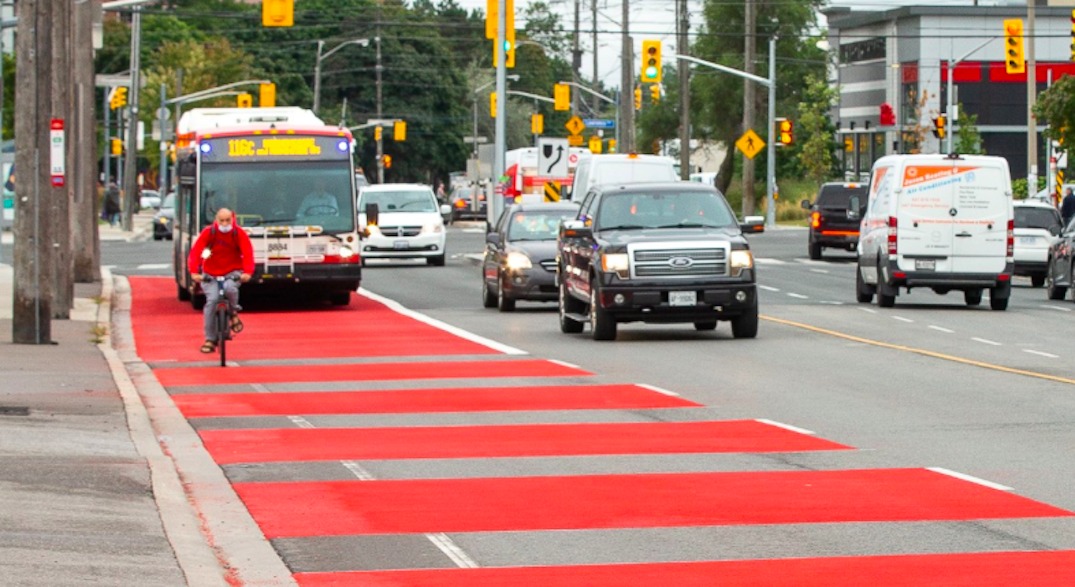 The TTC has started rolling out the new bus-only lanes.

The painting and installing of the bus-only lane is being done in preparation for the improved bus service coming to Scarborough on October 11.

Crews have started painting/installing 8.5 km of #RapidTO bus-only lanes (ok, buses and bikes) along Morningside Ave. in preparation for improved bus service coming to #Scarborough on Oct. 11! They run from Eglinton/Brimley to U of T Scarb. Read more at https://t.co/gfrtkwvIOr pic.twitter.com/e3mUHD5odu

This is part of the RapidTO project which was unanimously approved by City Council in July.

Eglinton East is among the TTC’s most heavily used corridors and during the pandemic continues, “to play a significant role in moving people around the city.”

The corridor emerged as the top candidate for the accelerated installation of priority bus lanes based on an assessment of several factors including improvement to transit reliability, available right-of-way, and considerations for transportation equity and inclusion of neighbourhood improvement areas.

The new bus lane runs along Eglinton Avenue East, Kingston Road and Morningside Avenue from Brimley Road, through to the University of Toronto Scarborough Campus.

“The priority bus lanes will be reserved for buses and bicycles 24 hours a day, seven days a week, and identified using red surface treatment and signage. The one-time installation cost is approximately $7.8 million,” a release notes.

On July 14, the TTC Board approved a report to fast-track the installation of priority bus lanes on five of its busiest corridors.

The five corridors, which had a combined pre-COVID-19 ridership of approximately 220,000 passengers per weekday, include: