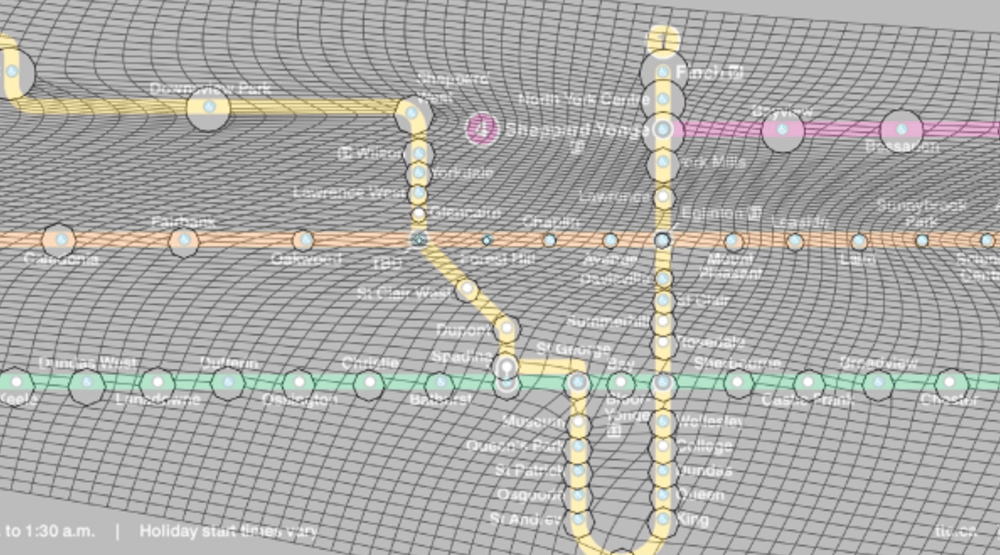 The TTC recently released new maps including the York-Spadina extension, and while the visual representations of the route are easy enough to navigate, inquisitive minds might be perplexed as to how the new lines extending far north fit into the TTC’s wide, but shallow transit ad format commonly positioned above train doorways.

MapTO creator William Davis has made the information really easy to envision with a simple animation that compares the paper map to Toronto’s geographical reality.

Using Bernhard Jenny’s MapAnalyst I was able to create a deformation grid over top of the subway map.

This tool allows you to see which points are actually experiencing the most deformation. The size of each circle represents its local inaccuracy – larger circles indicate greater inaccuracy.

Areas where the grid is more tightly packed mean that points are further from their neighbours. Wide grid spacing (as seen in the downtown loop) means the points are actually more confined when looking at the map to scale.

The take away is that the map distortion makes stations seem closer or farther apart than in reality and that the map should not be used as the basis to gauge distances and times from station to station.