The TTC is expected to lose almost $300 million by Labour Day, even as the transit commission makes staff and service cuts.

A 33-page report, which will be given to the TTC Board on May 13, outlines the “unprecedented fiscal impact” the COVID-19 pandemic has had on the economy, which in turn has deeply affected the transit system.

The TTC has an 85% decline in ridership causing it to lose around $21 million in revenue a week.

According to the report, the TTC has already lost $123 million in revenue and expects to keep losing around $90 million a month between now and Labour Day.

“To the end of April, a decline in ridership due to safety measures enacted to combat the COVID-19 pandemic has resulted in a $123 million or 31.2% loss in TTC passenger revenue when compared to planned revenue for this period,” said the report.

In order to mitigate some of the financial loss, the TTC has reduced service by approximately 15% to meet demand and plans to temporarily lay off 1,000 operators and 200 non-unionized employees.

These measures are expected to save $5.5 million weekly or $23 million in monthly operating costs once implemented in June, which will reduce the monthly shortfall to $69 million.

And, the agency has also reduced its 2020 capital budget by $208 million, enabling the TTC to release and redirect $116 million in permanent capital funding to the City’s Recovery Fund to further mitigate TTC revenue losses.

These actions are expected to reduce the TTC’s financial pressure from $21.4 million to $11.4 million per week — or by almost 50% — but will still leave a pressure of $297.7 million by Labour Day, the report outlines. 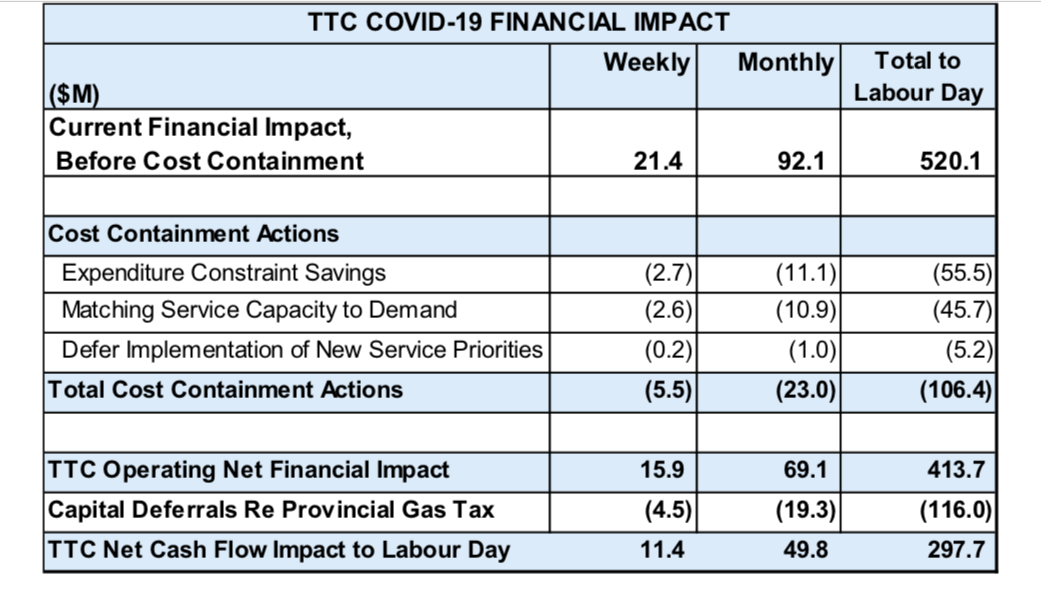 But, if no action had been taken at all, there would have been a loss of $520 million by Labour Day.

“Despite best efforts to contain costs, the magnitude of this shortfall cannot be born by the TTC or the City alone,” the report says.

However, there is still no federal or provincial funding for the TTC as of yet.

Just last week, Prime Minister Justin Trudeau indicated that the federal government is looking to provincial and municipal governments to bail out their public transit services during the pandemic.

Trudeau suggested that while the federal government has greatly increased its capital funding supporting new and improved public transit infrastructure, it is not in a position to subsidize the operating cost of public transit.