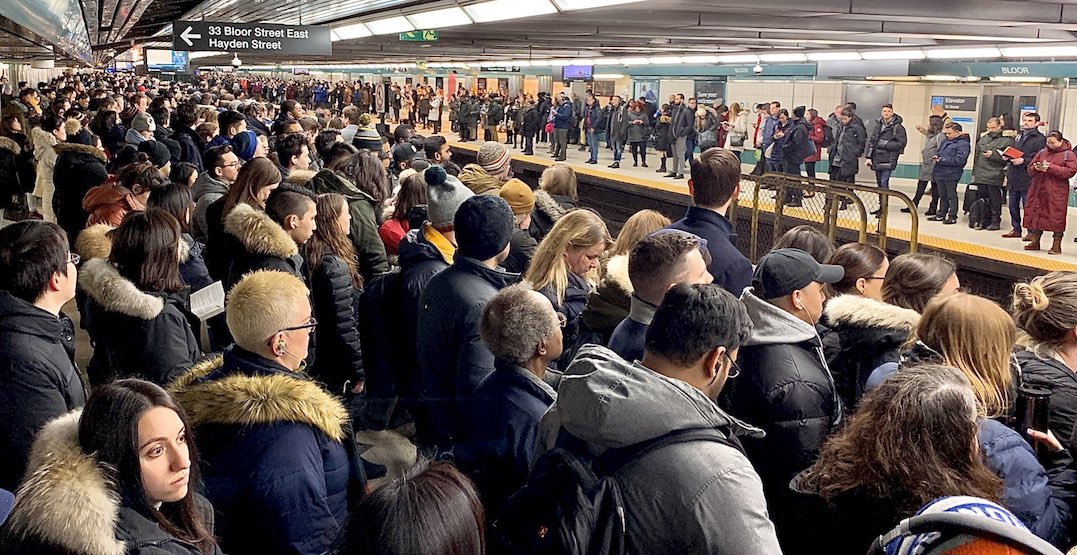 Note: Service has resumed on Line 1 between St. Clair West and Union stations, according to the TTC.

Torontonians have faced major setbacks throughout their Thursday morning commute due to a work car derailment that occurred at St. George Station.

Since about 5:45 am, there has been no service on Line 1 between St. Clair West and Union Stations.

REMINDER: Line 1 Yonge-University: No service between St Clair West and Union due to a work car derailment at St George. Shuttle buses are running, and customers may use GO Transit at Downsview Park, Dundas West, Union, Danforth, and Kennedy for the cost of a TTC fare.

Shuttle buses are running, while TTC staff and Toronto police are advising commuters to practice patience and seek alternate routes, if possible.

Customers may use GO Transit for the cost of TTC fare for the duration of the closure.

If you were lucky enough to avoid this morning’s chaotic commute, here’s a look at what you missed out on:

At least surface traffic is also completely screwed over so Maybe non-transit-users see how THEY benefit from a successful public transportation system even if they don’t use it personally? Maybe? #TTC pic.twitter.com/32RkKIMmvN

All these issues constantly happen during rush hour … makes me think that you guys do this on purpose. #ttc pic.twitter.com/I5YsuCUye9

#SubwayProblems do have a positive side. Even if you aren’t affected, go in late any way and say “hey boss, what a crowd in the subway. Here is video from @KevinFrankish’s twitter feed to prove it”. @TTCnotices @TTChelps pic.twitter.com/ExoNG7PAZx

Our worst subway in the world, the TTC! Line two is closed down because a of a derail and our lovely tax payers are waiting for the train at the south side to arrive and is over crowded at Yonge and Bloor at the south side. I am waiting for a huge incident will happened! pic.twitter.com/6VGH1uKz5a

Lineup to shuttle buses this am. Why do pple put up w/delays all the time? No matter when or what day I go on the subway, there’s a problem big or small. @ttc It’s hardly a good look for you to preach pple about paying their fares when you think nothing of stealing their time. pic.twitter.com/S9HjXOQHcs

I did a bad job capturing this, but a knock-on effect of the #TTC subway closure this morning: streetcars completely backed up along King. pic.twitter.com/SWkF4ne9VI

Toronto subways down because of infrastructure failure. Despite calling a climate emergency, @JohnTory & his pals are not prioritizing #lowcarbon mass transport. So many people late fornwork today… #topoli @TTCnotices pic.twitter.com/VHvMM0gKoP

The lineup for shuttle buses at 930am outside St Clair West station pic.twitter.com/Hhep6zurLb

This is the #TTC line for southbound from St George since the derailment. pic.twitter.com/pJdQg2oW4L

St. Clair station at 9:43am due to closure of university line between Union and St. George #yyz #ttc #Toronto pic.twitter.com/1tVQ4vEIn3

This is the second time that the TTC has dealt with a derailment during rush hour in the last month.

Another incident occurred on Line 2 on January 22, when a partial derailment meant no service between Ossington and Jane stations for several hours.