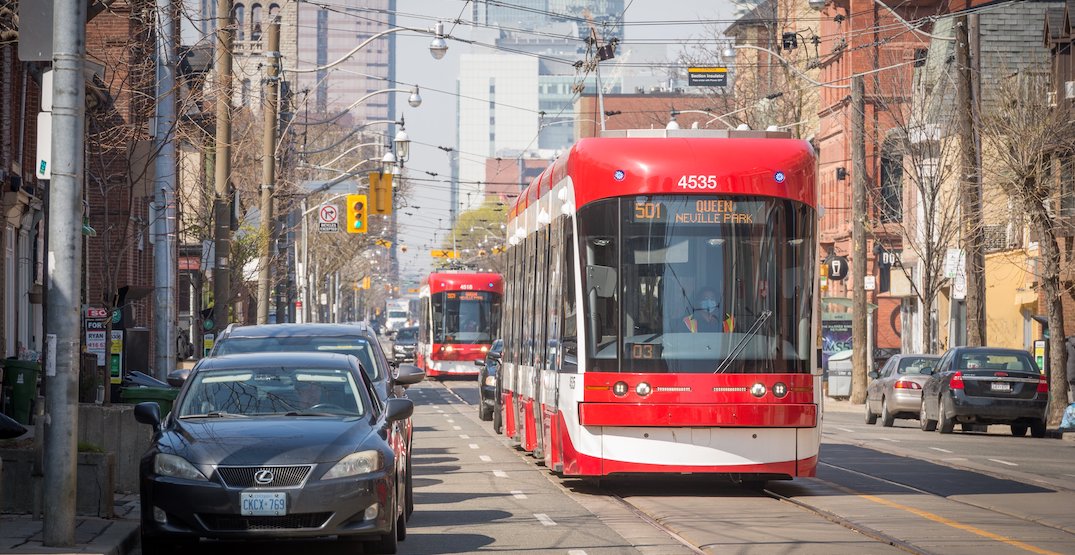 In a city where public transit projects taking much longer than anticipated is the norm, the TTC finishing up a project on Queen Street a full month ahead of schedule feels somewhat unbelievable.

The TTC announced earlier this week that the overhead work being done for the 501 streetcar on the east end of Queen Street, between Kingston Road and Neville Loop, has finished weeks earlier than anticipated.

UPDATE: Effective Monday, December 6, 2021, overhead work impacting the east end of the 501 streetcar service has been completed a month ahead of schedule, with upgraded pantograph service now available between Kingston Road and Neville Loop. pic.twitter.com/yMslzy23h5

The upgrade work was originally expected to continue throughout the month of December.

According to the TTC, the now-completed work will allow the pantograph — the apparatus connecting the roof of the streetcar to the overhead power lines — to have better service.

A two-kilometre stretch of Queen Street West from Fennings Street to Niagara Street is still undergoing serious construction. Large swaths of the road have been entirely blocked off to allow for streetcar track upgrades. According to the City, this work is expected to wrap up on December 31.

#TrafficAlertTO Critical infrastructure upgrades on Queen St. W. are in progress. The road has reopened from Spadina Ave. to Niagara St. Work from Niagara St. to Fennings St. starts this week and expected to finish Dec 31. More at https://t.co/jMbsrDTYV7. pic.twitter.com/BH8E4mXrJE