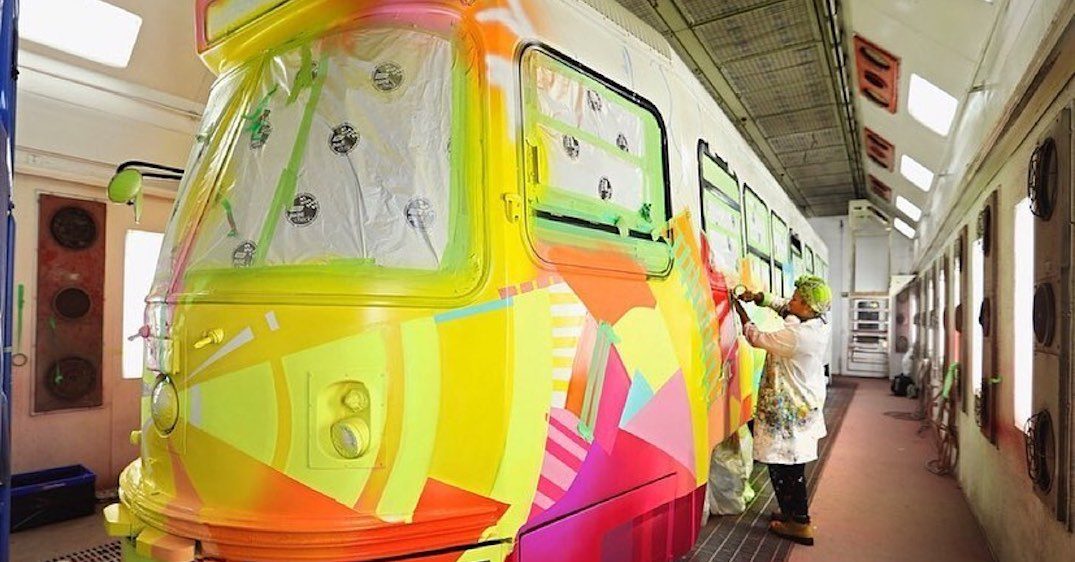 A group of artists have come together to ensure the last of the TTC’s old model streetcars make a statement when they cruise through town.

As part of an art project called CityFund, a new charity that’s changing the way citizens support the growth and vibrancy of Canada’s cities, the TTC will be rolling out a rather colourful streetcar this week.

‘A Streetcar Named Toronto‘ is the organization’s first project, which includes the revamp of a TTC Canadian Light Rail Vehicle (CLRV), and has been hand-painted and decorated by local artists as part of celebrations for the retirement of the 40-year-old fleet.

“The retirement of the CLRV has presented a rare opportunity for the TTC to not only support the arts, but also to set a new bar for the integration of art on public transit,” said TTC Chair Jaye Robinson in a statement.

Several local artists were selected to transform streetcar #4178, with Jacquie Comrie painting the exterior of the vehicle using a variety of paints and full-spectrum palettes, including neons and glow-in-the-dark paint, making it visible to everyone at night.

The interior will feature art activations by Nicole Beno, Ryan Van der Hout, and Chris Perez, along with textile and lighting modifications by Suanne McGregor.

The colourful streetcar will be in service until December primarily on the 506 Carlton route during the week and periodically on the 501 Queen route on weekends. It will also run on 511 Bathurst during Nuit Blanche on Saturday, October 5, according to the TTC.

Funding for A Streetcar Named Toronto is provided through CityFund, a new charity dedicated to bringing the city to life.

“It’s been a thrill to be able to do this,” said CityFund President Mark Fiorillo. “Art is often a destination kind of thing so to be able to bring it to people in an intimate space like this and show them something during their commute that they might not otherwise see is a real privilege.”

According to the TTC, the first CLRV was put into service 40 years ago this week, on September 30, 1979, on the 507 Long Branch (Humber Loop-Long Branch Loop) route.

The last of the CLRVs will be retired in December with other special commemorative events planned between now and the end of the year.

In addition to being spotted on the streets of downtown Toronto, the public can also catch an up-close look at this vehicle during a community event to be held on Saturday, September 28 at Roncesvalles Carhouse, between 1 pm and 4 pm, complete with a TTC/United Way BBQ.