Update: This closure was originally scheduled for two days, but the weekend’s work will now conclude on Saturday night. Regular subway service will resume Sun., Feb. 25 at 8 am.

There’s another major TTC closure on Line this weekend.

On February 24, Metrolinx crews will continue construction on the new Eglinton Crosstown LRT, while the TTC said it will take advantage of this closure to perform track maintenance and asbestos removal in the vicinity, resulting in the closure of TTC’s Line 1 Yonge-University between Sheppard-Yonge and St Clair stations.

Unlike past closures, there will be no shuttle bus service on Yonge Street during this closure.

Instead, the TTC will be adding frequent express service on all major east-west routes to connect customers to the University portion of Line 1 at Yonge-Sheppard, York Mills, Lawrence and Eglinton stations.

According to the TTC, this will allow for quicker access to the downtown core, including the Air Canada Centre for the Toronto Maple Leafs and Toronto Raptors games this weekend.

For customers travelling to and from locations along Yonge St. the TTC will provide increased service on the 97 Yonge route.

The 61 Avenue Rd North and 512 St Clair routes will also run more frequently throughout the weekend. 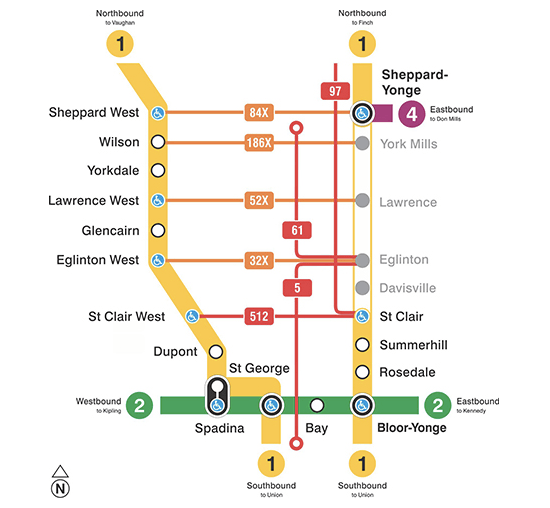 Customers travelling from York Region are encouraged to use the University portion of Line 1. There is free parking is available at Highway 407, Pioneer Village and Finch West stations.

All stations will be open for fare sales, connections and access to surface vehicles.

Buses that normally service Davisville Station will board outside on Yonge St., Chaplin Cres. and Davisville Ave.

This is the first of several closures of this portion of Line 1 in 2018. More than 20 closures in total will be required for Crosstown LRT construction.