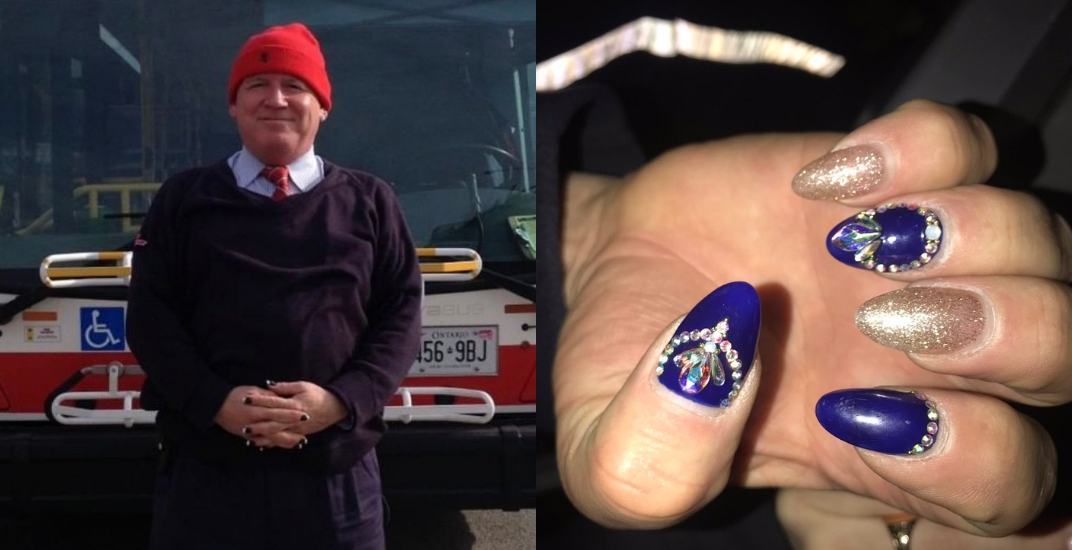 When it comes to nail art, the last place you would think you would find inspiration is aboard a TTC bus — especially on the hands of the driver.

But one TTC operator’s nails are about to become the talk of the nail salon because he’s going viral.

And it all started with a brief encounter with OCAD University student Brigit O’Neil last month.

On January 29, O’Neil was on her way to night class and got on the 501 bus during the terrible weather.

As O’Neil was paying, the driver began trying to tell her something.

Ok so I’m hoping I can go viral on Toronto twitter with this cute story. I was on my way to night class in the terrible weather and got on the 501 bus. As I was paying with change the driver was trying to tell me something.

The TTC bus operator-turned-rising Instagram sensation, Michael Maguire, was trying to tell her he really liked her nails.

“He saw I was slightly confused by the compliment so offered his hand,” wrote O’Neil in a tweet.

I had my headphones on, plus that plus a hood, so I couldn’t really hear and assumed it was about my payment. I struggled to take it off and asked him to repeat himself and he told me he really liked my nails. He saw I was slightly confused by the compliment so offered his hand.

What she saw completely surprised her, as you don’t typically expect to see a male, 56-year-old, TTC worker sporting outrageously bedazzled nails.

“Let me tell you I did not expect to see a set of glamorous long pointed blue and silver nails encrusted with rhinestones,” said O’Neil.

Following Brigit’s tweets, his Instagram has gone viral leading to thousands of new followers as he brightens commutes and challenges stereotypes.

Maguire’s nail obsession first began during the ice storm five years ago. He slipped and shattered his left leg, forcing him to be in a cast for months.

When his cast was removed, the uncleanly state of his feet prompted the nurse to suggest nail care.

And let’s just say, he took the suggestion seriously.

While Maguire was self-conscious at first, how he chooses to express himself has become a point of personal joy – both for himself and as a TTC operator looking to serve his community better.