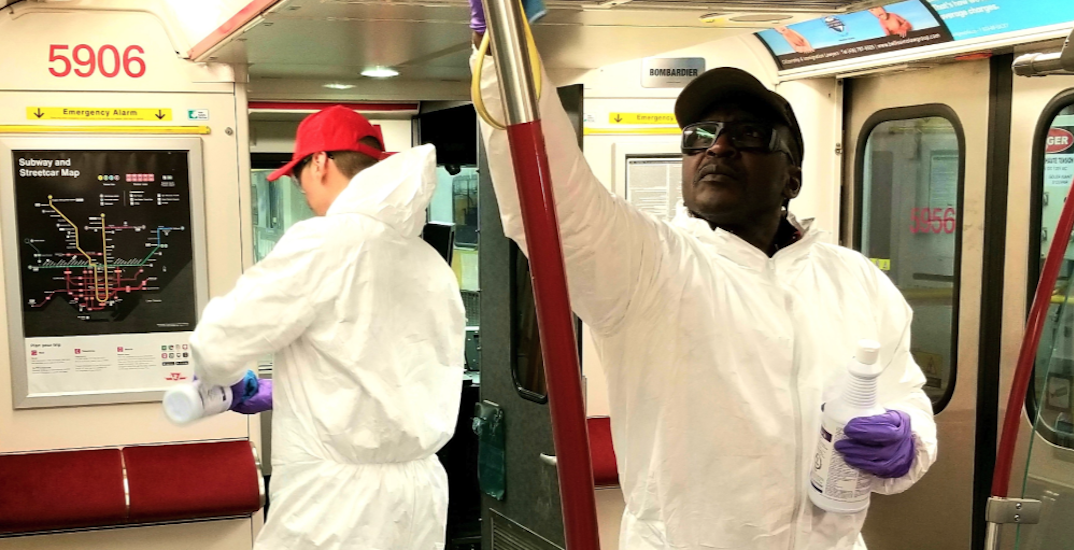 Toronto Public Health put together the patient’s travel patterns, which show the detailed commute taken over March 2, March 3, and March 4.

According to Metrolinx, the 40-year-old man recently travelled here from Las Vegas, and was diagnosed with the COVID-19 virus.

The man then travelled on Line 1 at Yorkdale Station after transferring from the GO service. He then headed southbound to St. George Station around 6:45 pm and then went westbound to Bathurst Station, where he boarded the 7 Bathurst bus around 7:10 pm.

On March 3, the commute was the exact same, except when he boarded the 7 Bathurst bus it was a little later in the day, around 7:15 pm.

On March 4, when the patient took the train from Bathurst Station to Islington Station there is no confirmed time.

At the end of the workday, the man boarded a train at Yorkdale Station around 6:45 pm, heading southbound towards St. George Station and then went westbound to Bathurst station. The man then boarded the 511 streetcar around 7:20 pm.

Public health officials say the man boarded the bus around 6 pm on each of those days, getting off the bus at Yorkdale GO, travelling from his workplace.

Response from the TTC and Metrolinx

According to the TTC, since January the transit system has been doing “significant additional cleaning and disinfection” of all public places with a focus on buttons, railings, handles, and straps.

The TTC says it’s in daily communication with Toronto Public Health and that no additional measures are required at this time.

TTC’s Stuart Green added that the 900 Airport Express buses were getting disinfected as well.

“As an extra measure, and to address employee/customer inquiries, crews will do a quick disinfection wipe down on the TTC 900 Airport Express at Kipling Stn,” said Green on Saturday.

“As we heard yesterday from the city’s top doc, COVID19 risk on transit is very low. It’s an extra level of protection.”

On Friday, Dr. Eileen de Villa, Toronto’s Medical Officer of Health, said it was important to note that Toronto residents should take the TTC and public transit and there is still “low risk” for transit users.

Dr. de Villa also that she and her family will continue to use public transit, and said that Toronto Public Health is only providing the transit use history “out of an abundance of caution.”

Metrolinx also said it is working closely with Toronto Public Health and is following expert opinion on the matter.

The public transit agency identified the buses the man used and as extra precaution took them out of service, where they are being given extra cleaning, Matt Llewellyn, Senior Advisor of Media Relations and Issues for Metrolinx wrote in a post on Friday.

“The Metrolinx COVID-19 response team is monitoring the situation very closely – and at this time, the risk for both customers and staff remains very low,” Llewellyn said.

To provide an additional level of protection for staff and customers, Metrolinx has begun applying a long-acting, anti-microbial agent to the entire bus and train fleets.

To date, more than 150 buses have been treated, with an additional 40 more being completed each day.

All UP Express trains were treated last week and crews continue to apply the microbial agent to dozens of GO train coaches each night.

“As a public transport agency that moves more than 300,000 people every day, this wasn’t unexpected news,” Llewellyn said. “We are very prepared.”

The Metrolinx spokesperson also emphasized that an experienced team has been developing a strategy over the last six weeks to engage with a possible outbreak of COVID-19.

Distribution of gel-based hand sanitizer and disinfectant wipes throughout all workplaces and GO stations including buses. Stations and buses should all be fully installed with hand-sanitizers over the next week or two.

Should public health officials determine that additional measures and precautions need to be taken, Llewellyn says Metrolinx is ready for that as well.

“The organization recently procured enough respirators for all front line staff, as well as gloves — but at this point, public health officials say that type of personal protective equipment is not required. They maintain that the risk of transmission is extremely low unless you are in sustained contact with an infected person,” he said in the post.

As of the morning of March 8, there were 34 confirmed cases in Ontario.