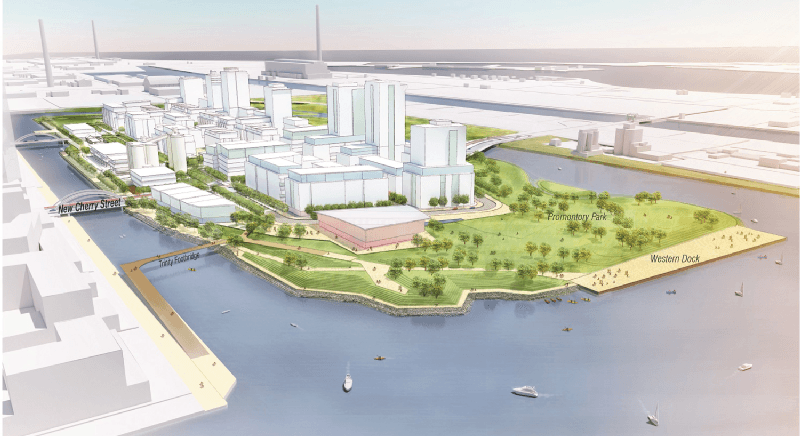 Conceptual future vision of the Port Lands/City of Toronto

Toronto’s waterfront is about to get a facelift.

Although it is not an immediate facelift, a project for the waterfront and the Port Lands has been approved funding – and when it’s over, things will look quite different.

The Essroc Quay Lakefilling project has been approved to receive funding from the Government of Canada and the Province of Ontario through the Clean Water and Waste Fund. Upon Toronto City Council approval for the remainder of the funds, the essential project will begin construction mid-2017.

Part of a larger vision for the Port Lands region, this particular project will include creating a new landmass around the current Essay Quay through lakefilling. This will stabilize the area shoreline under flood conditions, as the current dockwall on Essroc Quay is old and is at risk of collapsing under flooding conditions. According to the City, The Essroc Quay Lakefilling project, while part of the proposed scope of work for the larger Port Lands Flood Protection project, is a stand-alone project that can be advanced independently of the larger scope of work. Once complete, this will then enable the development of vibrant, complete and sustainable mixed-use communities.

The Port Lands is a man-made area created by decades of infilling what was once one of the largest wetlands on Lake Ontario. For those looking for further information on the new projects, check out the City’s website or the two minute video below describing the new vision along with the solution for providing needed flood protection.