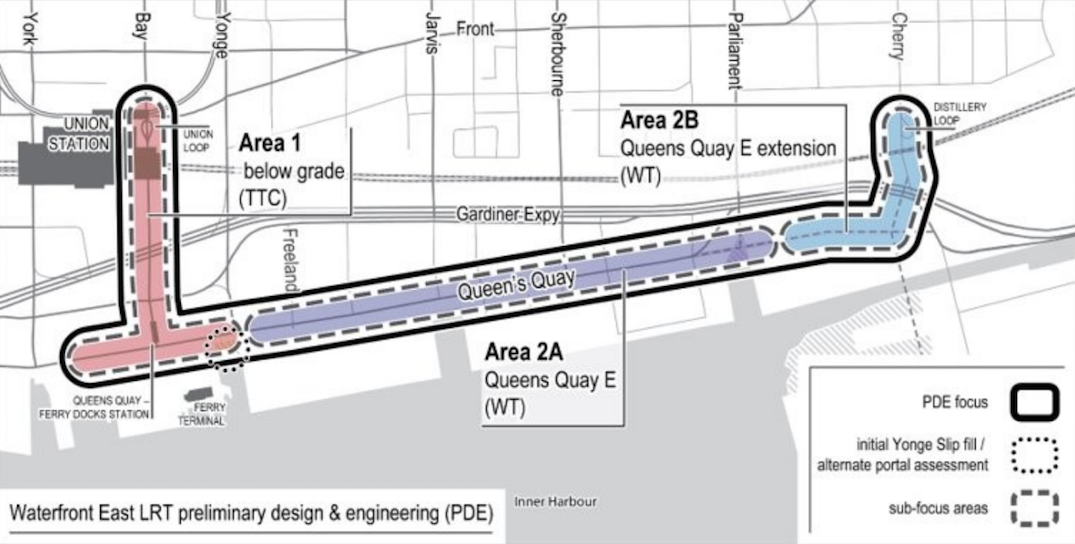 The City of Toronto is planning to revamp transit along the waterfront with the Waterfront East Light Rail Transit (LRT) system.

Ahead of a community consultation meeting later this month, the city has released a new report detailing many of the proposed improvements.

The Waterfront East LRT is one of several sections of that network and covers the area from Union Station to the Distillery Loop.

Current plans for the Waterfront East LRT break this section of the network down into three areas. Area 1 is an underground section running from Union Station to Queens Quay. It will include the Union Station Loop, the Queens Quay-Ferry Docks Station, and a new tunnel extension and portal on Queens Quay east of Bay Street.

Area 2A runs from Queens Quay East at Yonge Street and goes east to Parliament Street.  Area 2B goes from Parliament Street to the Distillery Loop, where it will connect under the rail corridor.

The City is currently in the process of assessing the best spot to put a streetcar portal — a piece of infrastructure that will allow streetcars to go from street-level to an underground tunnel — so that the cars can connect from Queens Quay to the underground Union Station streetcar loop. 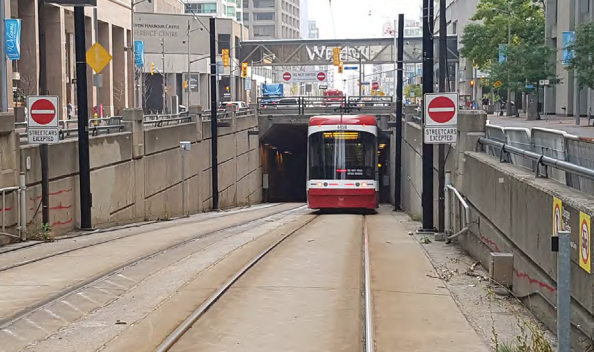 An existing streetcar portal on Queens Quay. (City of Toronto)

The City’s favoured plan calls for the portal to be built on Queens Quay between Bay and Yonge, in front of the Westin Harbour Castle Hotel. This option is more cost-effective than other proposals, costing approximately $40-50 million less.

The one drawback is that using this location would block the hotel’s current driveway, so a partial fill-in of the Yonge Street slip would be required to provide a new access point to the hotel driveway. 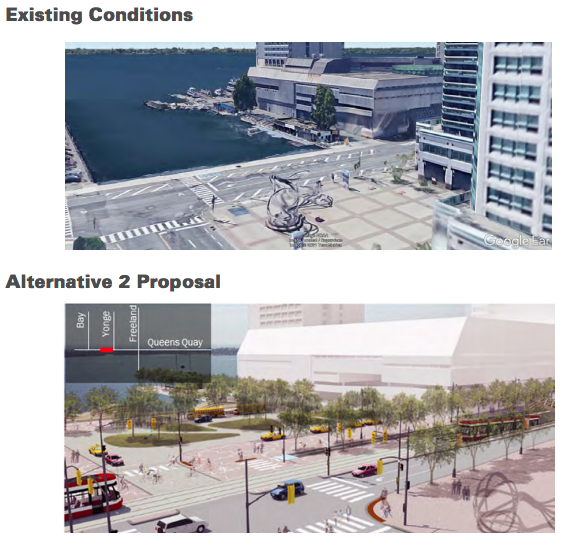 A rendering of the favoured portal plan. (City of Toronto)

According to the report, to meet City Council’s direction, the team behind the Toronto waterfront transit design, Business Case, will need to have a completed design by the fall of 2021, in time for the city’s 2022 budget process.

Anyone looking to voice their opinion on the design can join the virtual community consultation meeting, being held on February 17 at 7 pm.

Registration, as well as links to informational videos about the project, is available on the meeting’s Eventbrite page.