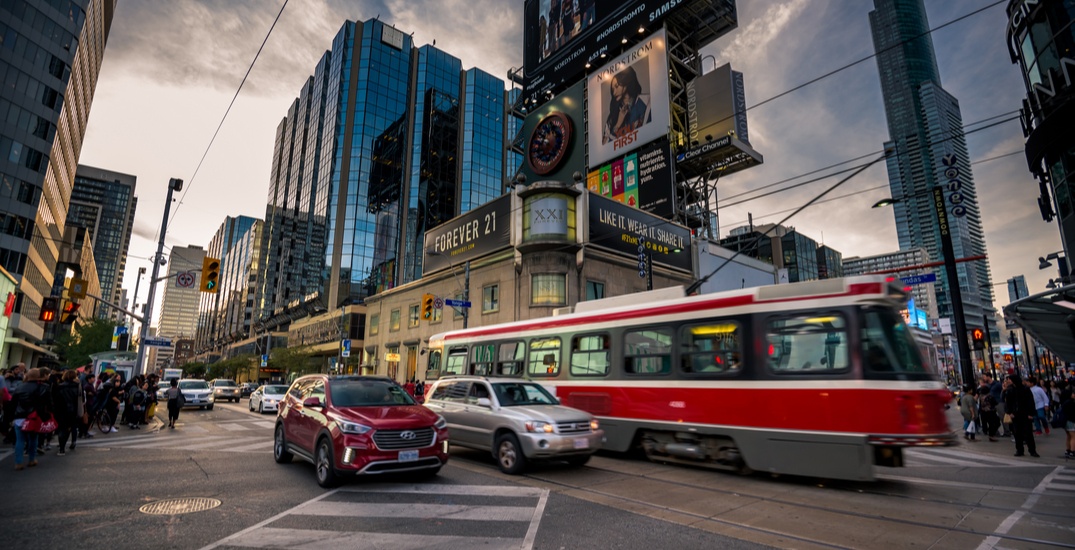 Five years ago, the city first initiated the redesign of Yonge Street and a new report from the city reveals that big changes could be coming to Toronto’s most iconic street in the future, including going car-free.

To help meet the demand of Toronto’s growing population, the city created the project yongeTOmorrow, which considers the redesign of a stretch of Yonge, between Queen Street and Carlton/College Street, to make the area more pedestrian-friendly.

A recently released report on the project says Yonge Street is “struggling” to serve the growing pedestrian demand as there are overcrowding and insufficient clearway on sections of the sidewalk in the area.

According to the report, “the number of pedestrians on the street is expected to grow due to a projected doubling in population and employment in the surrounding area by 2041 along with a continued mode shift towards walking.”

The report also said that Yonge Street also lacks space for seating, plantings, and sidewalk cafes, which further help support the growing population in the area.

According to the city, the potential alternatives to increase pedestrian space and improve the way people move through the area, including going car-free or condensing to one, two, or three driving lanes.

The report says the design and operation of Yonge street have remained unchanged since the early 1900s, including a 20-metre right-of-way with four lanes of traffic.

Currently, Yonge Street sidewalks have daily volumes that exceed 100,000 pedestrians per day. Because of this, pedestrian movement is slowed down due to crowding, especially near Yonge-Dundas Square.

The report also revealed that between 1996 and 2016, there has been a “significant” decrease in driving and an increase in alternative modes of transportation in the area, including walking, cycling, and public transit.

Former mayoral candidate and city planner, Jennifer Keesmaat, says in the past 10 years, there’s been a 17% decrease in driving on Yonge Street and one in four people now walk to work in the area.

We’ve been driving growth to our transit corridors, with the dream that as the city grows, driving does not. Yonge Street is our big success story – 17% decrease in driving, and 1 in 4 walk to work. Now an urgent need to transform the street for pedestrians. #TOcore pic.twitter.com/Hs3gBRszdH

Keesmaat says redesigning the street is a critical part of ‘right-sizing’ city infrastructure to fit with who uses what. In this case, there are way too many pedestrians trying to safely walk around in an area that’s still dedicated to vehicular traffic.

“It’s old school to give so much space to cars — they are no longer the backbone of the street,” said Keesmaat.

“Streets must evolve to deliver on the dream of a walkable city. Yonge Street should become our first truly car-free street in the city.”

Redesigning streets is a critical part of ‘right sizing’ city infrastructure to fit with who uses what. Streets must evolve to deliver on the dream of a walkable city. Yonge St should become our first truly car-free street in the city. It has density, growth, mix, subway. #Golden pic.twitter.com/POPrxPISdw

Matt Elliott, a city hall columnist, says that while the preferred solution to the project is still being determined, it’s expected to cost $47.1 million and construction could be finished by 2027.

The city says funding for the project is available within the 2019-2028 capital budget.

Here’s an update report on the yongeTOmorrow project, which will redesign Yonge Street to better accommodate the huge number of pedestrians. Preferred solution TBD, but estimated to cost $47.1 million with construction finished by 2027. https://t.co/BeRSgDkM4E pic.twitter.com/vQ84l0sj4X

The project will be considered at city council’s upcoming meeting on October 17.