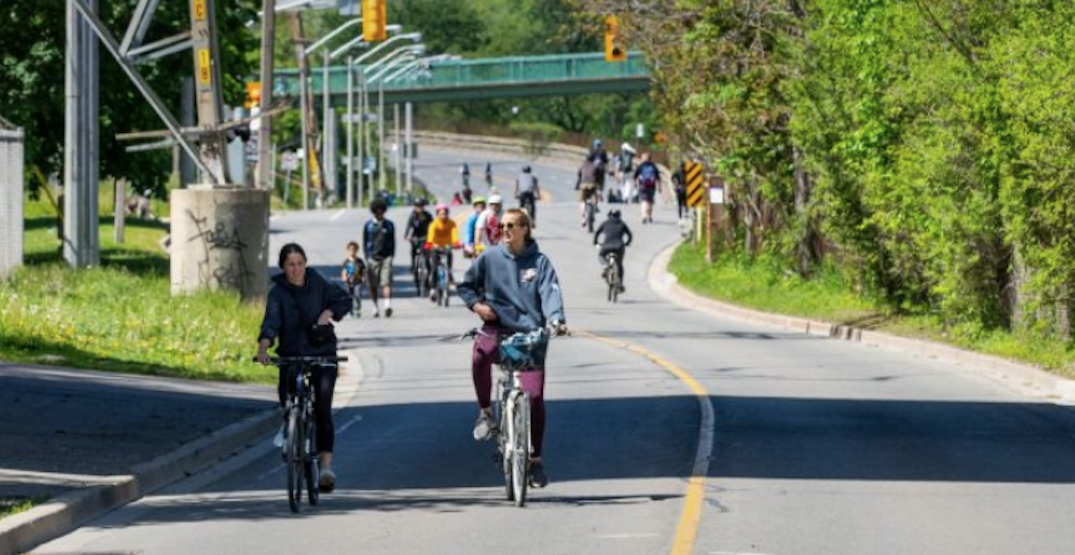 After kicking off the ActiveTO program earlier this month, three major Toronto roads will experience closures once again this weekend, allowing runners, walkers, and cyclists to use the road space.

Torontonians will be able to hit the three streets — Bayview Avenue, River Street, and Lake Shore Boulevard East — beginning Saturday, May 8 at 6 am and ending Sunday, May 9 at 9 pm.

Bayview will close between Front Street East and Rosedale Valley Road. River Street will have closures between Bayview Avenue and Spruce Street. And Lake Shore’s eastbound lanes will close between Leslie Street and Woodbine Avenue.

Those who do head to the streets to take advantage of the ActiveTO routes are advised to do so only with members of their own household. Also of note, there is no onsite parking available and nearby parking is limited, so arriving to the roads by bike or on foot is recommended.

The ActiveTO road closures program first launched just before the May long weekend last year in response to the pandemic. It was done as a means to give Toronto residents more space to get outside while maintaining physical distancing.

Lake Shore Boulevard West was one of the more popular ActiveTO routes in 2020, but it’s not able to close every weekend this year due to extensive construction that is happening nearby. Mayor John Tory, however, announced that Lake Shore West will have its first closure of the year on the weekend of May 15-16.

The City is also planning to expand road closures to Allen Road starting June 6, but no details have yet been released. Other locations for potential ActiveTO routes are still being considered including Black Creek Drive and roads within Exhibition Place.