Well, the mild weather in Toronto was nice while it lasted.

But winter is definitely making a big comeback. Not only is there an extreme cold weather alert in effect today for the city, but next week The Weather Network is predicting the  snow show is about to get real again.

Light flurries will start as early as Saturday but by Tuesday will develop into a full blown snowstorm, with up to 15 cm of snow predicted to hit Toronto. Wednesday doesn’t appear as though it’s going to let up any, with another 5-10 cm expected to fall. 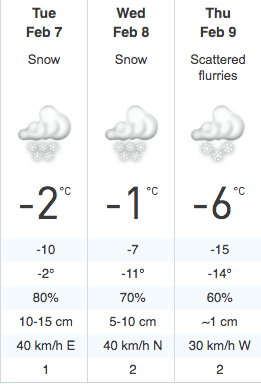 If you thought winter was done with Toronto, think again. This will be the biggest snowstorm of 2017 so far.