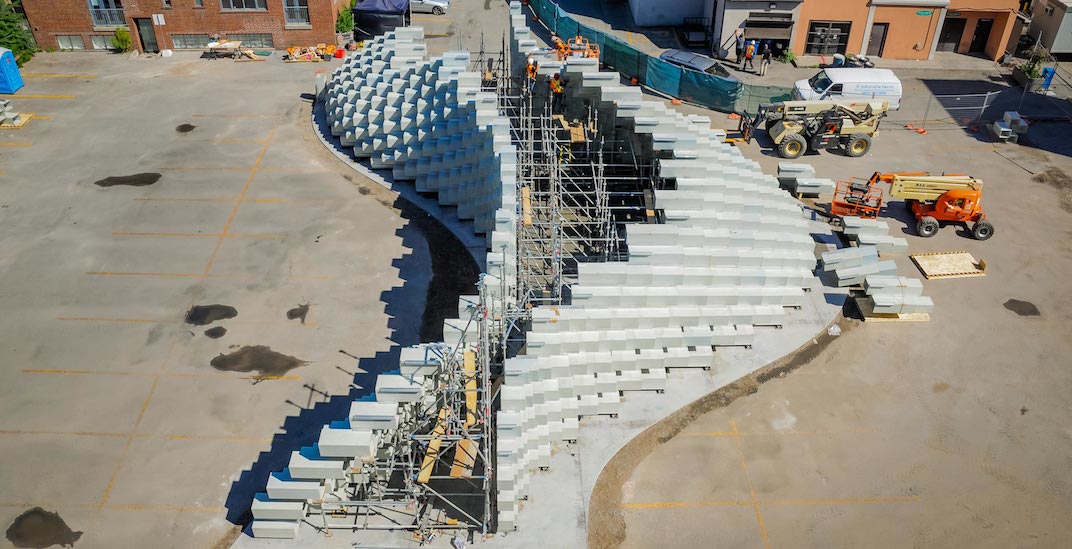 There will be a giant walk-through public art installation in downtown Toronto this fall at the corner of King Street and Brant Street.

Vancouver-based developer Westbank is bringing the “Unzipped Wall” – an 88.5-ft-long, 39-ft-wide, and 46-ft high cavern-like structure – to a new exhibition held in a parking lot in the area. 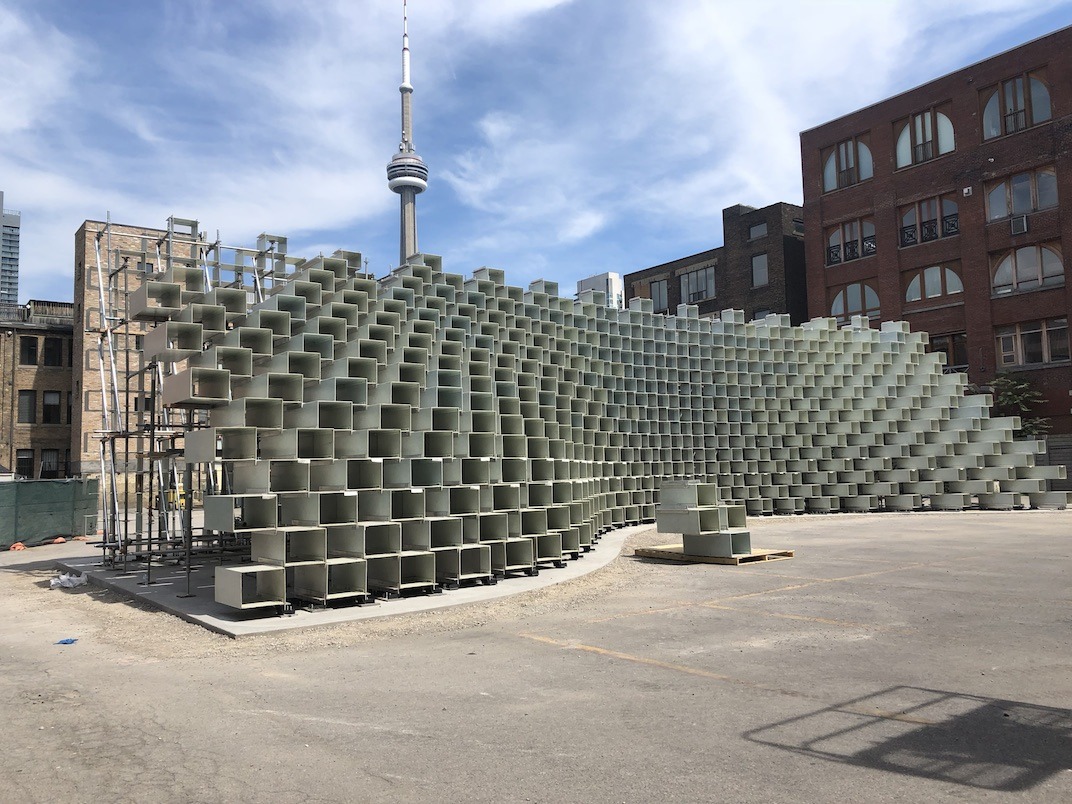 The pavilion was designed by Danish architect Bjarke Ingels for the 2016 Serpentine Pavilion in London’s Hyde Park. It was acquired by Westbank shortly after the exhibition’s conclusion.

It features 1,802 modular, stacked fibre glass boxes that are stacked on top of each other then “pulled apart to form a cavity within it,” effectively creating a sheltered pavilion space.

This public art installation serves as both an architectural showcase and a space for unique nighttime programming and events. 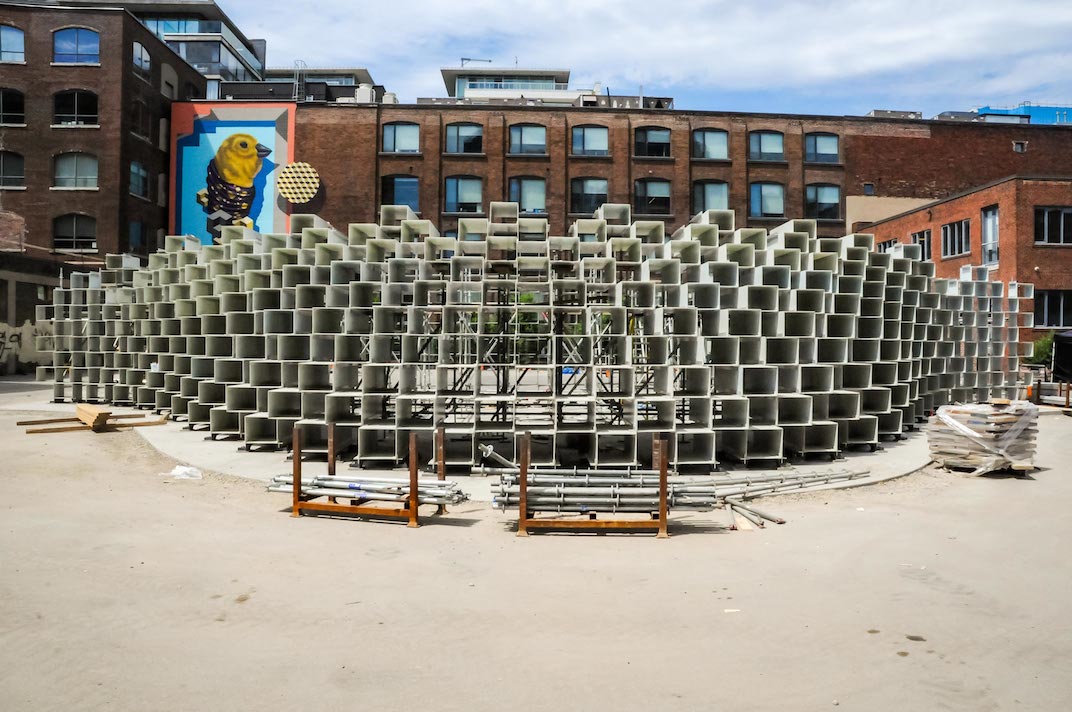 At the moment, the pavilion is being reassembled at its designated Toronto site ahead of its scheduled September 2018 opening. This marks the start of the pavilion’s muti-city tour, before ultimately landing at its permanent home beside Westbank’s Shaw Tower in downtown Vancouver.

The installation will remain in Toronto until the end of November 2018.

Has anyone tuned into the new Netflix design series #Abstract ? Their architecture episode featuring Danish architect Bjarke Ingels was shot in the lead up to the installation of the Serpentine Gallery in Hyde Park. The show features renowned graphic designer Paula Scher to illustrator Christophe Nieman. Hats off to Netflix for this one! 👏

Pavilions are often talked about as test beds for architectural ideas that need to be experimented with outside of the constraints of a functioning building. The annual programme of pavilions hosted by the Serpentine Gallery in London showcases the work of generally very renowned architects who have not completed a building in the UK. As a consequence, the projects tend to be less experiments of new, untested ideas, and more distillations of the key characteristics of the body work completed by that architect in other countries. This is less true of this year’s pavilion by Bjarke Ingels of BIG than of those of many of his predecessors—the diaphanous design is a departure from much of Ingels’ built work, which owes more to the ramped, cranked and stacked form making of his former employer, Rem Koolhaas’s OMA. Ingels’ pavilion could instead be seen as a built prototype for the screened facades of some of BIG’s more speculative proposals for buildings. Robin Evans has remarked that architecture differs from other forms of art in that it must not only be about the world, but also of the world—consequently making it harder to sustain a perception of it as an art object. This problem of being of the world is generally removed by the pavilion genre, which requires architecture to exist as an object in space, but does not require it to offer an effective enclosure or to house a function. The Serpentine pavilions, however, are required to accommodate a cafe for visitors, adding utilitarian demands not usually asked of a pavilion. The interior of Ingels’ pavilion achieves this with the addition of large umbrellas to provide shelter from the rain and sun that the architecture does not, and small free-standing cubes that house equipment and refreshments. The umbrellas read as visually distinct from the architectural composition and so appear as furnishings with a status similar to the visitors themselves. The cubes, however, are formally related to the overall architectural composition . . . [continued on previous post] #bjarkeingels #BIG #architecture #serpentinepavilion #article #photography #williamtozer #hydepark

A post shared by INSPIRATION from Art Museums (@museuminspiration) on Feb 9, 2017 at 3:32am PST