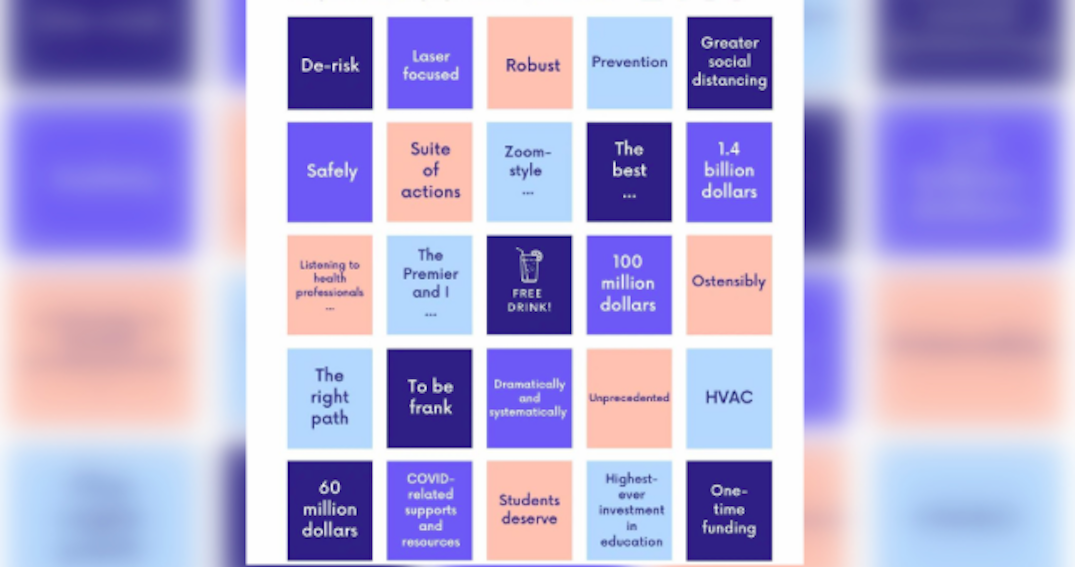 Heading back to school this year is filled with many anxieties and worries due to the COVID-19 pandemic.

But one teacher is deciding to put a humorous spin on the situation with a drinking bingo game. But it’s not just any bingo game. The card is filled with Education Minister Stephen Lecce’s most-used answers at his news conferences.

“De-risk,” “laser focused,” and “suite of actions” are just some of the answers on the card.

And the reaction was overwhelming.

“I made that bingo and it was such a riot,” Eastview Public School Grade 7 and 8 teacher Julius told Daily Hive. “I received so many more suggestions too, you could make a 10 pack set. People really loved it and people thought, finally you can see the hypocrisy.”

The education minister’s frequently used responses showed Julius that when you listen to Lecce’s speeches back-to-back he’s essentially saying the same thing over and over.

Premier Doug Ford commented on the bingo game during his press conference on Thursday, defending Lecce as the “best education minister.”

“Ford hired a comms manager to run education. And he’s doing a good job for that, but he’s not doing the work of an education minister,” Julius said.

While Julius said they like to figure out a way to vent and laugh through their suffering, the bingo card, even though light in content, speaks to larger concerns with how the current Ford government is handling education amidst the pandemic.

“We need to fund education and put the value on human life. Right now the value is placed on profit way more than human life,” they said.

Although the Ford government has allowed parents to opt students in virtual learning or in-person instruction, Julius notes that this is not an option for teachers and staff.

And the lack of choice is intrinsically tied to socioeconomic issues and the financial hardship of childcare, which is expensive for many.

“If the Ford government had been working on this from March these would not be the only solutions available. We need to facilitate both while having a real element of choice. Right now, the choice is tied to privilege.”

And the risk of attending school without proper health protocols is a huge risk.

“Imagine the trauma for the student wondering if they killed their teacher? That pain is way more than not attending school. And just because you don’t have a child, doesn’t mean there isn’t risk, ” Julius said.

But the Toronto teacher is also worried about what the Ford government will do to public education due to all the spending being put into the system right now to make it safer for students.

They acknowledged that the provincial government is making a pathway to privatize public education with the government likely claiming austerity once the pandemic is over, which would make them cut costs to education in the long-term.

“I don’t care if the government is in debt if it’s for the people, not corporations.”

The province then “unlocked” $500 million in reserve funds for school boards to use, to have the physical distancing they need in classrooms.

And Lecce allowed for school boards to have staggered start times to reduce the amount of children entering schools at the same time.

Julius was excited when Lecce announced $50 million for HVAC funding, but when broken down that means each school get $10,000, which isn’t adequate.

But for now, while Julius knows the fall will be difficult, teachers and educators will need to get through it with community, humour and resilience.

“I’ve designed the game so every row gives you a bingo,” Julius said.

And whether you drink tea, coffee, juice or something alcoholic, the goal is to drink a lot, “I think you need all of it.”