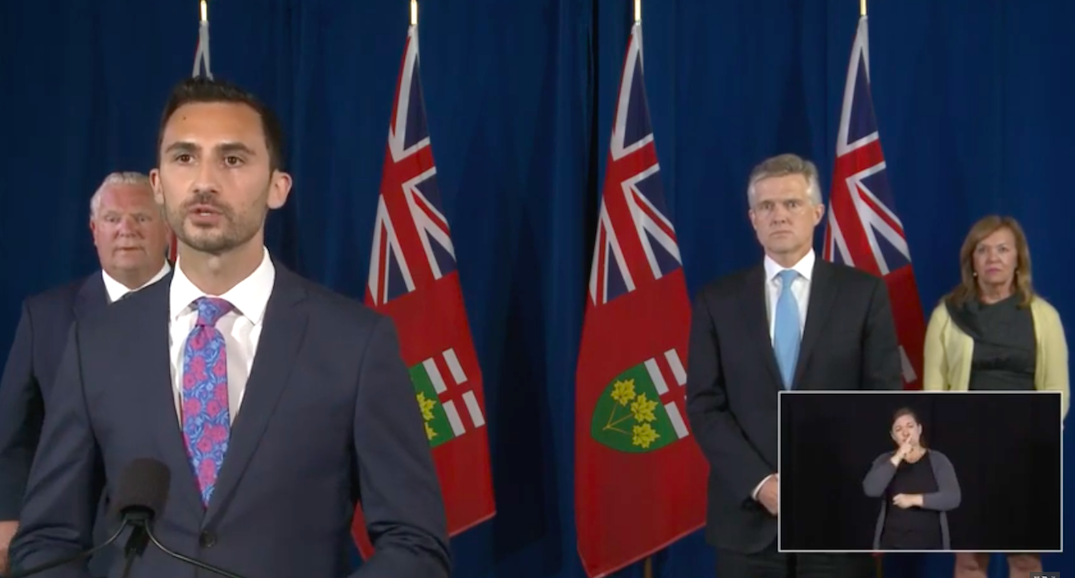 Education Minister Stephen Lecce “unlocked” $500 million in funding that school boards will now have access to in order to have better physical distancing in classes and improve air quality in the school spaces.

On Thursday, Lecce said that for one year, school boards will have access to reserve funding, which is tax payer dollars not spent, in order to have the physical distancing measures they want to see in their classrooms.

“This funding will support them further,” Lecce said.

He added that medical experts have emphasized the importance of airflow and quality. Therefore, an additional $50 million will be provided to improve ventilation.

He also said that he is open to a “cautious” restart, meaning a staggered start for different days come September. This looks like kindergarten students starting day one, followed by other grades the same week.

He noted that his government is spending $900 million for a safe school return during the pandemic, “folks we are pulling out all the stops.”

Lecce was joined by the Chief Medical Officer of Health Dr. David Williams who said “we feel we are well prepared” but he noted it doesn’t mean outbreaks won’t occur.

Prior to Thursday, the provincial plan has raised some concern over classroom size for elementary students which will not be reduced for kindergarten to Grade 3.

Right before Lecce’s announcement, Ontario’s four major education unions said they requested an “immediate meeting” with the Minister of Labour and representatives from the Ministry of Education, as the province’s Guide to Re-Opening Ontario’s Schools “fails to meet the requirements set out in the Ontario Occupational Health and Safety Act.”

“By reopening schools without measures to appropriately address critical issues, the Ministry of Education has placed the health and safety of educators, their students and the entire school community in significant and imminent danger,” the union’s letter states.

During the press briefing, Lecce noted that four school boards don’t have access to the reserve funding.

The leader of the Ontario Liberal party, Steven Del Duca, also voiced concerns, saying he is “deeply disappointed” that Ford is “stubbornly refusing” to make the necessary investments needed for safe schools.

Del Luca said that Ford “continues to pass the buck to school boards and risk our kids.”

Deeply disappointed to hear Doug Ford is stubbornly refusing to make the investment needed for safe schools. Continues to pass the buck to school boards and risk our kids. #onpoli #onted

Since the back-to-school plan was released Premier Doug Ford and Lecce have defended their decisions saying it was based on the “best medical minds” and classroom sizes are already the lowest in the country.